On Tuesday, Hurricane Irma grew to a major Category 5 hurricane with sustained winds of 185 mph. President Trump’s declarations allow the Department of Homeland Security (DHS) and the Federal Emergency Management Agency (FEMA) to respond as quickly as possible after the storm moves through the affected areas. 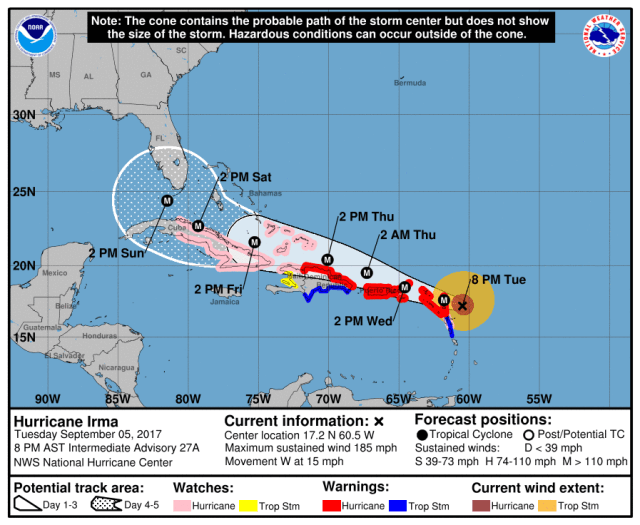 “Specifically, FEMA is authorized to identify, mobilize, and provide, at its discretion, equipment and resources necessary to alleviate the impacts of the emergency,” the White House announced in a statement obtained by Breitbart Texas. “Debris removal and emergency protective measures, including direct Federal assistance, will be provided at 75 percent Federal funding.”

The National Hurricane Center (NHC) reported that Hurricane Irma is moving to the west (280 degrees) at 15 mph. As of the 8 p.m. AST bulletin, officials reported the storm is located 85 miles east of Antigua. The barometric pressure continues to fall and is currently at 27.05 inches (916 mb).

A Hurricane Watch is in effect for…
* Guadeloupe
* Haiti from the northern border with the Dominican Republic to Le
Mole St. Nicholas
* Turks and Caicos Islands
* Southeastern Bahamas
* Cuba from Matanzas province eastward to Guantanamo province

A Tropical Storm Watch is in effect for…
* Haiti from south of Le Mole St. Nicholas to Port-Au-Prince

The storm is expected to impact the northern Leeward Islands late Tuesday night and move on to the Virgin Islands on Wednesday. Puerto Rico should experience the catastrophic winds of Hurricane Irma late Wednesday or Wednesday night. Forecasters call for the storm to move on to Cuba and begin a slow turn towards the southwestern tip of Florida on Sunday.

“My wife is leaving the Keys today,” Monroe County Emergency Management Director Martin Senterfitt said in a statement obtained by Breitbart Texas. “She would rather go to the dentist than sit in traffic. The sooner people leave the better. If ever there was a storm to take serious in the Keys, this is it.”