Have you ever thrown together a last-minute party, with no planning, no help, no promotion, no money spent…and thousands of people showed up?

I have. It happened last week in Las Vegas. And you need to hear about it.

I decided to announce an idea on my nationally-syndicated Las Vegas radio show last Friday. I announced a “Open the Nevada Economy” protest caravan. I called it, “the World’s Safest Protest.” Because the entire protest would happen in our cars, listening to all the speeches, interviews and play by play, on my national radio show, on your car radio.

I also predicted it would become “the biggest protest caravan in Vegas Strip history.” Everyone needs to hear what happened. Because the lessons of this story are incredibly powerful for patriots, conservatives, capitalists, anyone who hates the “FAKE NEWS MEDIA.”

But first I’ve got to tell you about my limitations. The good news is I have a very big, opinionated, controversial mouth. And a loud megaphone: my afternoon drivetime radio show that reaches pretty much every conservative in Las Vegas.

The bad news is, I have no organization skills. It’s hard to believe, but I simply announced this rally and then I showed up. There was no planning, no paid staff, no money spent. We did have a few dedicated Vegas Republican groups email blast about the event to their lists. That was our total promotion. Not one dollar was spent. And a handful of volunteers agreed to show up to greet the attendees. That was the total organization for this event.

Until I showed up, I had no idea what I’d find. And then I drove up and saw it with my own eyes: a mob scene out of a movie. It looked like the traffic outside the Super Bowl.

My fans had come out by the thousands. Their cars covered acres and acres of the largest shopping mall parking lot in Vegas. Hundreds of their cars also lined all the surrounding streets. We had created a last-minute “Trump rally.” Except, we did it without Trump. And without his team of hundreds who actually organize each rally.

I was opening speaker at seven Trump rallies in Las Vegas- starring Donald J. Trump. So, I know what a Trump rally looks like. This was literally the size of a Trump rally. Except it was just my fans.

We then proceeded to jam the Vegas Strip, bumper to bumper, for three hours — flying American flags, with signs demanding the re-opening of the Nevada economy.

Folks, this should have been the number one story on the evening news broadcasts. Las Vegas is the crossroads of America. What happens in Vegas is proof of what’s happening across America. The fact that thousands of cars and people showed up to demand the reopening of the economy should be major national news.

The pot is boiling. People are mad as hell, and they’re not going to take it anymore.

It’s time to re-open the economy. We want to get back to work, and paying our bills, and feeding our families. We are the small business owners, employees and taxpayers. We don’t want welfare. We don’t want handouts. We take personal responsibility for our lives. We won’t allow government to feed our families. That’s our job. We won’t hide in our homes anymore. 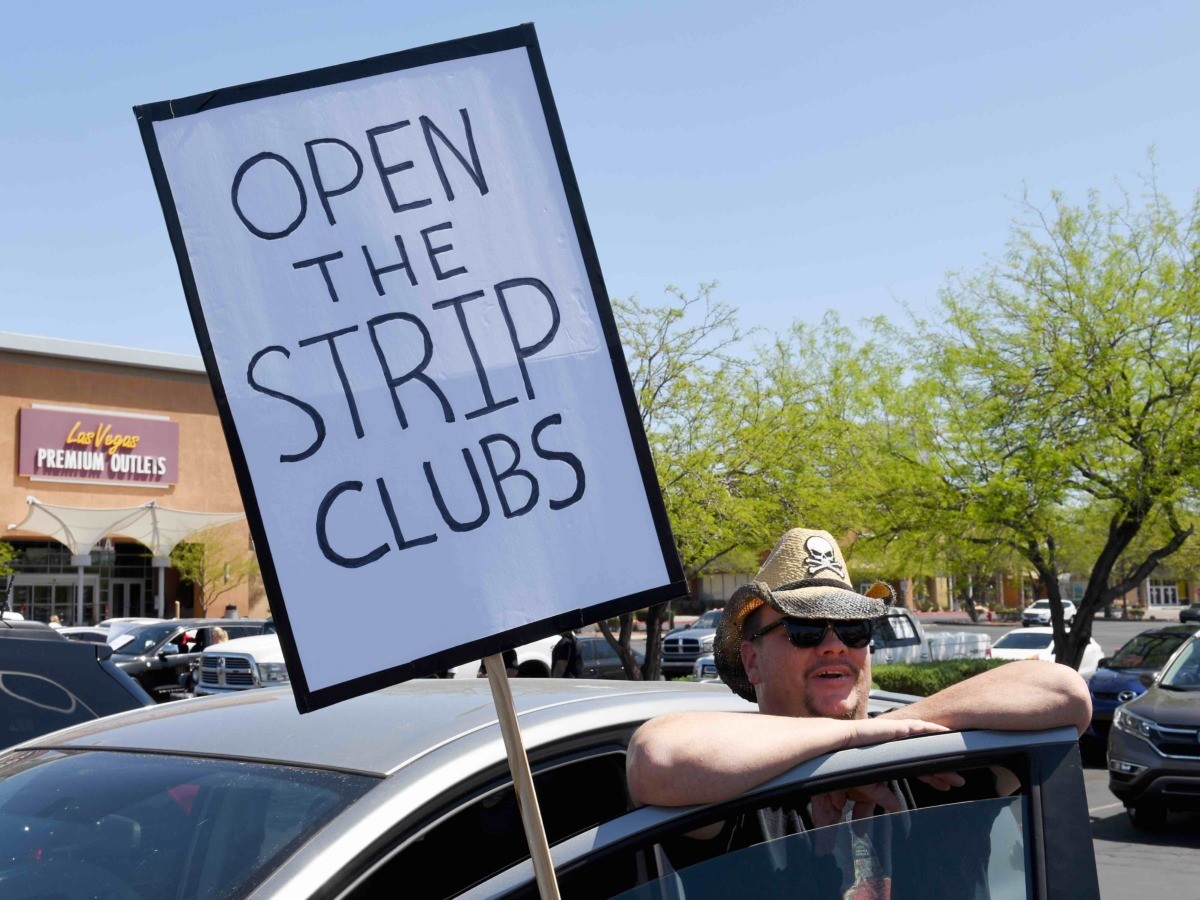 LAS VEGAS, NEVADA – APRIL 24: Strip club DJ Jack Slammy of Nevada displays a sign as people gather for a protest caravan along the Las Vegas Strip hosted by conservative radio talk show host Wayne Allyn Root to demand the reopening of the Nevada economy, hit hard by coronavirus-related closures, on April 24, 2020 in Las Vegas, Nevada. Root broadcast his show from his car during the protest, which comes after Las Vegas Mayor Carolyn Goodman made controversial comments arguing against Nevada Gov. Steve Sisolak’s stay-at-home order and closure of nonessential businesses to help combat the spread of the coronavirus. Sisolak said there needs to be a 14-day decline in COVID-19 cases and hospitalizations along with expanded testing and tracing capacity before the state can enter phase one of reopening. (Photo by Ethan Miller/Getty Images)

We are willing to face the risks and sacrifice for our country — just like policemen, firemen and the military. We are the “First Responders of the economy.” You can’t stop us from earning a living. If you’re afraid, stay home. But we’re going to work — either with your permission, or without.

That’s the message the media and their big government handlers are afraid of. So, they had to downplay it, mute it, or make believe it never happened.

That’s why my massive rally was barely covered by the media. The television stations that covered it gave it a couple minutes coverage. None of them mentioned the crowd size, or the fact that outside of Trump rallies, nothing like this had ever happened in the history of the Vegas Strip.

But here’s the most shocking part of the story. I’m a member of the national media. I’ve hosted national TV and radio shows for my entire adult life. I’d never cover a story like this without interviewing the leader of this  massive protest. Yet not one media organization in America called the organizer and grand marshal of this massive protest (me) for an interview. How is this possible?

This remarkable show of force was the very definition of “grass roots” (as liberals call it). No money behind the rally. No billionaire GOP donors involved. No advertising. And certainly, no media to promote it. Yet thousands of patriots showed up in Las Vegas, 100% “organically.”

Yet the media couldn’t care less. They made believe it never happened.

All because they don’t like the message, or the messenger. The message ruins their narrative — that Americans are happy hiding in their homes, too afraid to work, thrilled to wait for government to save them.

But that’s not true. It’s a lie. Thousands of Las Vegans prove what the truth is. We want our lives, careers and businesses back. It’s time to reopen the economy.