A video of a mass protest-turned-rave-party in Lebanon’s second-largest city went viral over the weekend.

Lebanese DJ Madi Karimeh entertained a crowd of thousands of demonstrators in Tripoli on Saturday, as a mass protest against government corruption quickly turned into a music festival when Karimeh pumped dance music over a loudspeaker from a balcony overlooking the crowd.

The 29-year-old DJ was pleasantly surprised by the reaction his dance mix got.

“I don’t know how it happened,” he said in an interview Sunday. “When I got to the mic, it was amazing.”

His friends encouraged him to set up his equipment and entertain the crowd.

“People were seriously asking me to go up and play, but I didn’t have my equipment on me,” he said. “But then I told my friends, ‘Are we going to do this?’ They said, ‘Let’s do it.’”

Karimeh quickly set up his equipment on the balcony of a residential apartment overlooking Tripoli’s public square where the protests had been taking place for days.

“Luckily, the neighbors in the building knew my father and so they let me set up and at 6:15 p.m., I was playing,” he said.

Karimeh was proud that his music could bring his diverse country together in peaceful protests.

“Music is all about connection,” he explained. “I swear people were telling me if the roads weren’t closed from Beirut they would come to Tripoli tonight.”

He was also happy that the viral video of his impromptu rave gave people around the world a positive view of his country and his hometown: “You know what the most beautiful thing is? I was able to change the way people think of Tripoli.”

Like his fellow Lebanese, Karimeh wants government reform, stating he wants a government that reflects the needs and sensibilities of ordinary citizens like himself.

“I will tell you this but you might laugh,” he said. “I want someone like me to be in power. Someone who loves life. A person ambitious like me.”

Saturday’s impromptu rave party in Tripoli was just one of the many spontaneous demonstrations across Lebanon as part of a populist uprising protesting corruption and tax hikes. The demonstrations started last Thursday in response to a proposed $0.20 tax on calls made via WhatsApp and other messaging services. Although the government quickly dropped the plans, the protests morphed into demands for a sweeping overhaul of Lebanon’s political system, with grievances ranging from austerity measures to poor infrastructure.

Thousands rallied across the country on Saturday, chanting “revolution” or “the people demand the fall of the regime” — a common refrain of demonstrations in other parts of the Middle East.

On Sunday, hundreds of thousands of Lebanese men, women, and children gathered in central Beirut and other cities to demand better living conditions and the ouster of a cast of politicians who have monopolized power and influence for decades.

The protests have united all of Lebanon’s sectarian groups, as euphoric crowds partied deep into the night, leaving all political and sectarian paraphernalia at home to gather under the national cedar flag, dancing to impromptu concerts, and chanting often hilarious anti-establishment slogans.

The Tripoli demonstration-turned-music-festival is indicative of the peaceful atmosphere of the protests, which have been largely good-natured. Some protesters have enjoyed singing or launching into the traditional Lebanese dabke dances, while others played cards and smoked shisha into the early hours on Saturday.

The protests — which some have dubbed the “WhatsApp revolution” — have also been marked by their diversity, drawing wide swathes of Lebanese society largely united on what they oppose, with many condemning the entire political class as thieves and criminals. 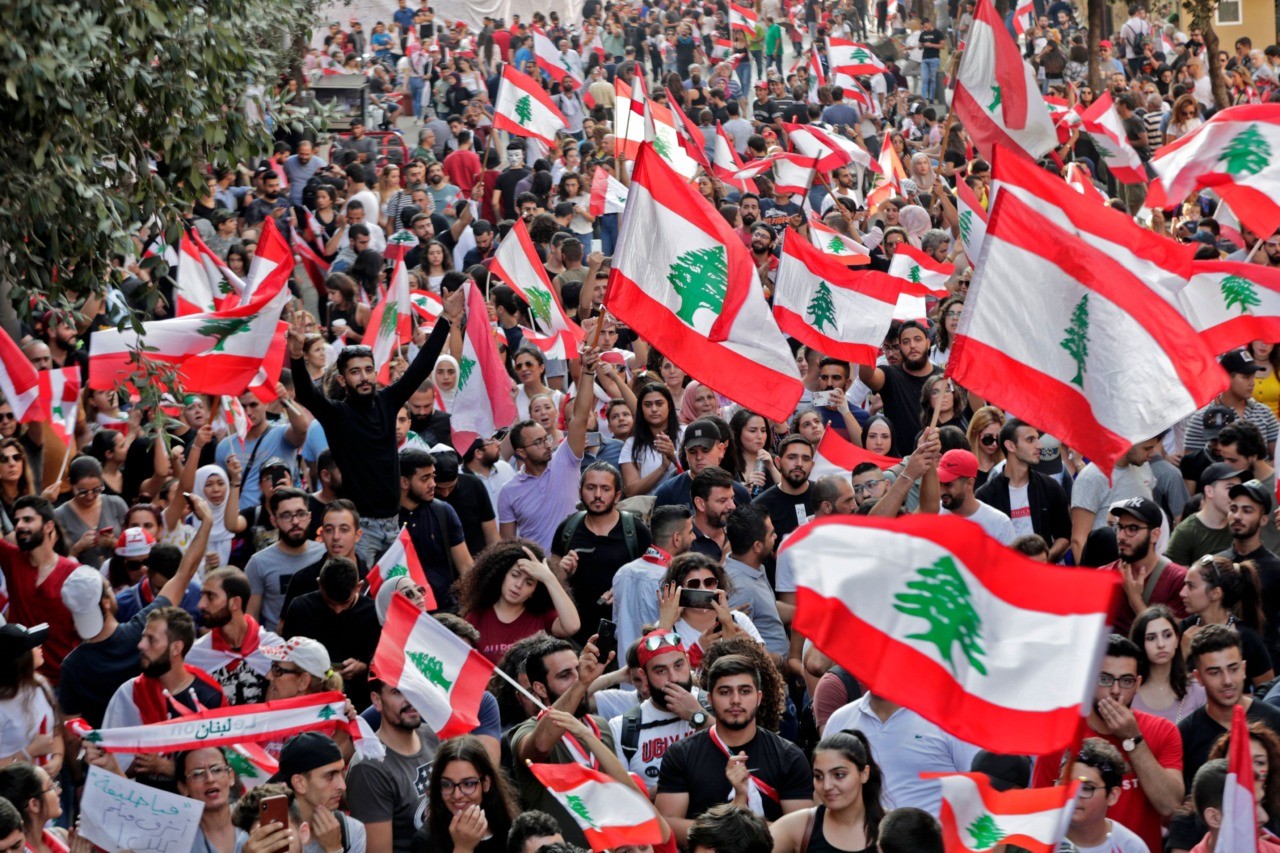 Lebanese protesters wave national flags during demonstrations to demand better living conditions and the ouster of a cast of politicians who have monopolized power and influence for decades, on October 21, 2019, in downtown Beirut. (ANWAR AMRO/AFP via Getty Images) 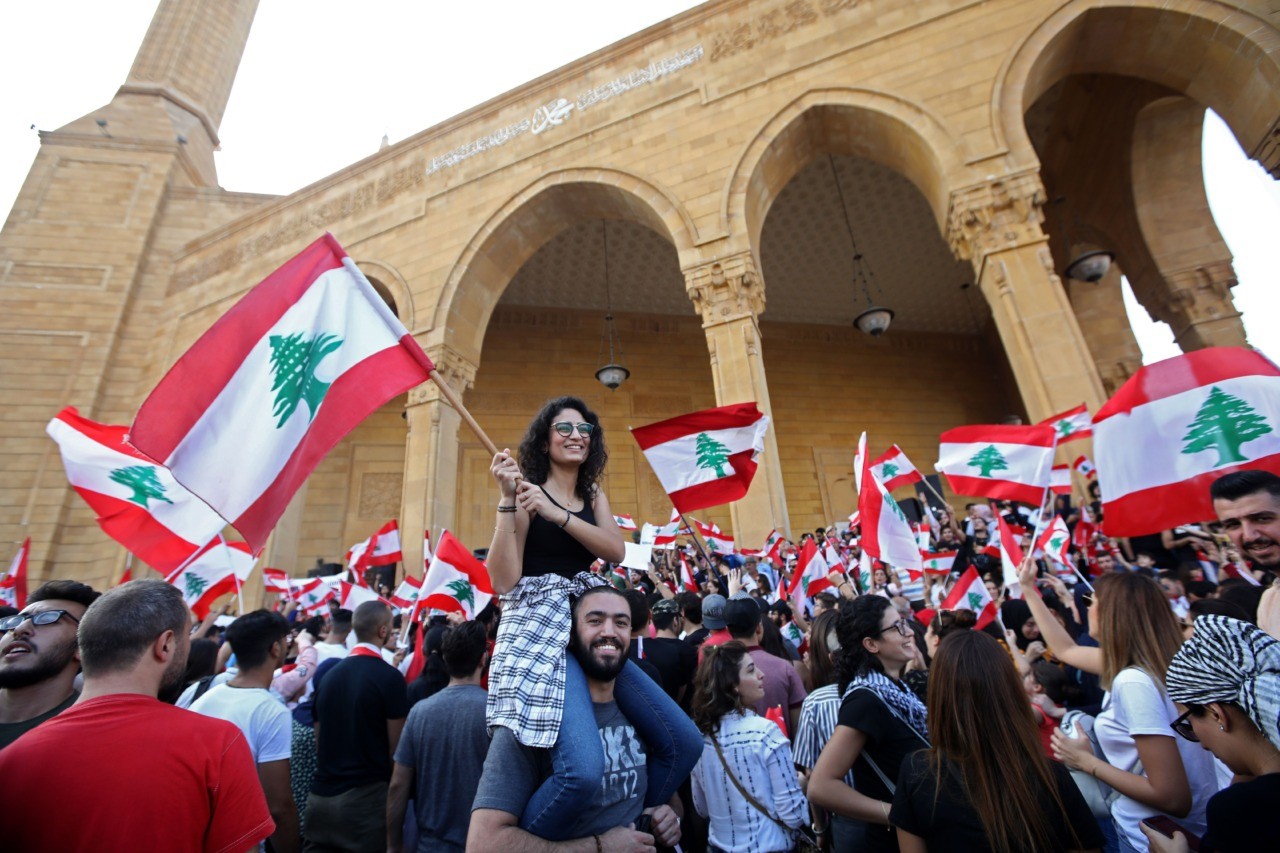 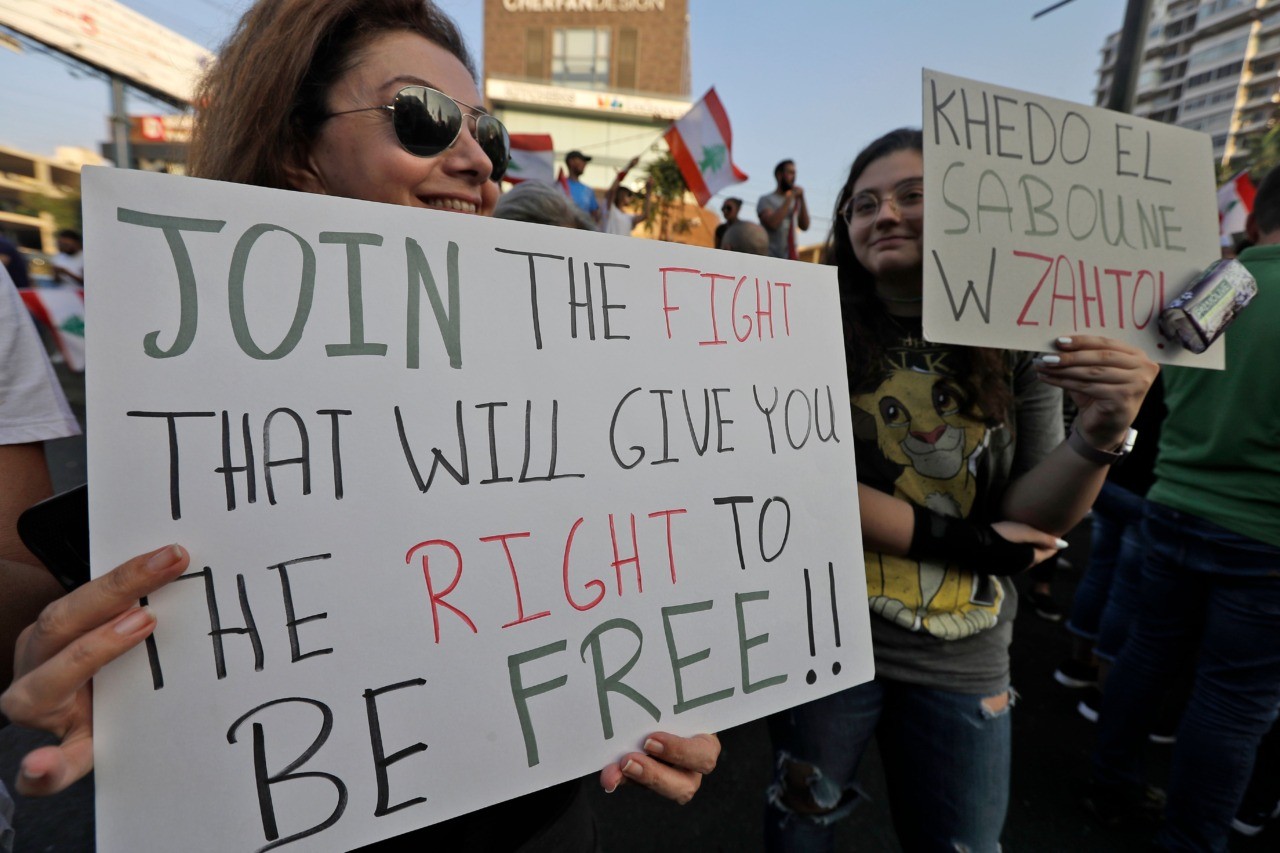 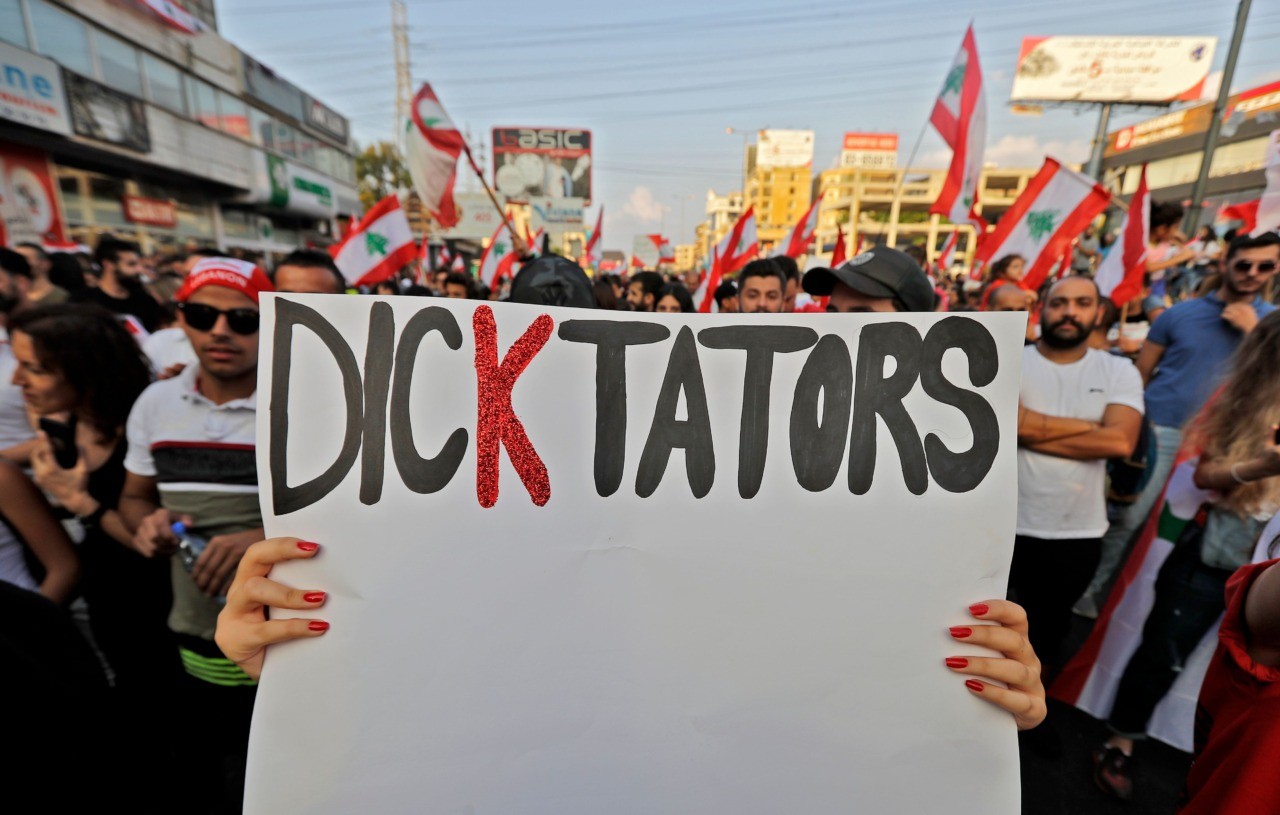 A Beirut protester holds a sign mocking the ruling class of politicians, as part of the fifth day of mass protests across the Lebanon demanding better living conditions and the ouster of a cast of politicians who have monopolized power and influence for decades, on October 21, 2019. (JOSEPH EID/AFP via Getty Images) 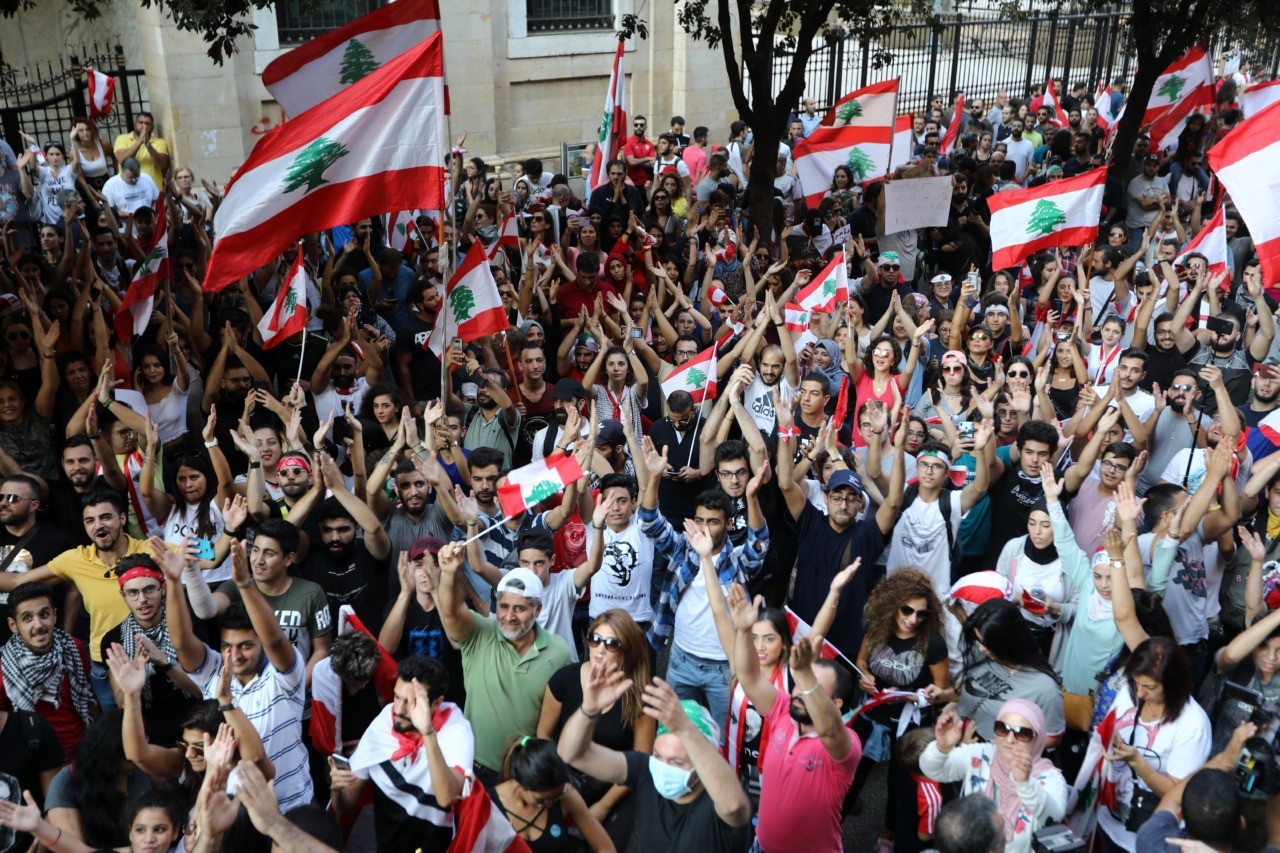 Lebanese across all sectarian divides take to the streets in Beirut’s Riad al-Solh Square for the fifth day to protest government corruption, on October 21, 2019. (ANWAR AMRO/AFP via Getty Images) 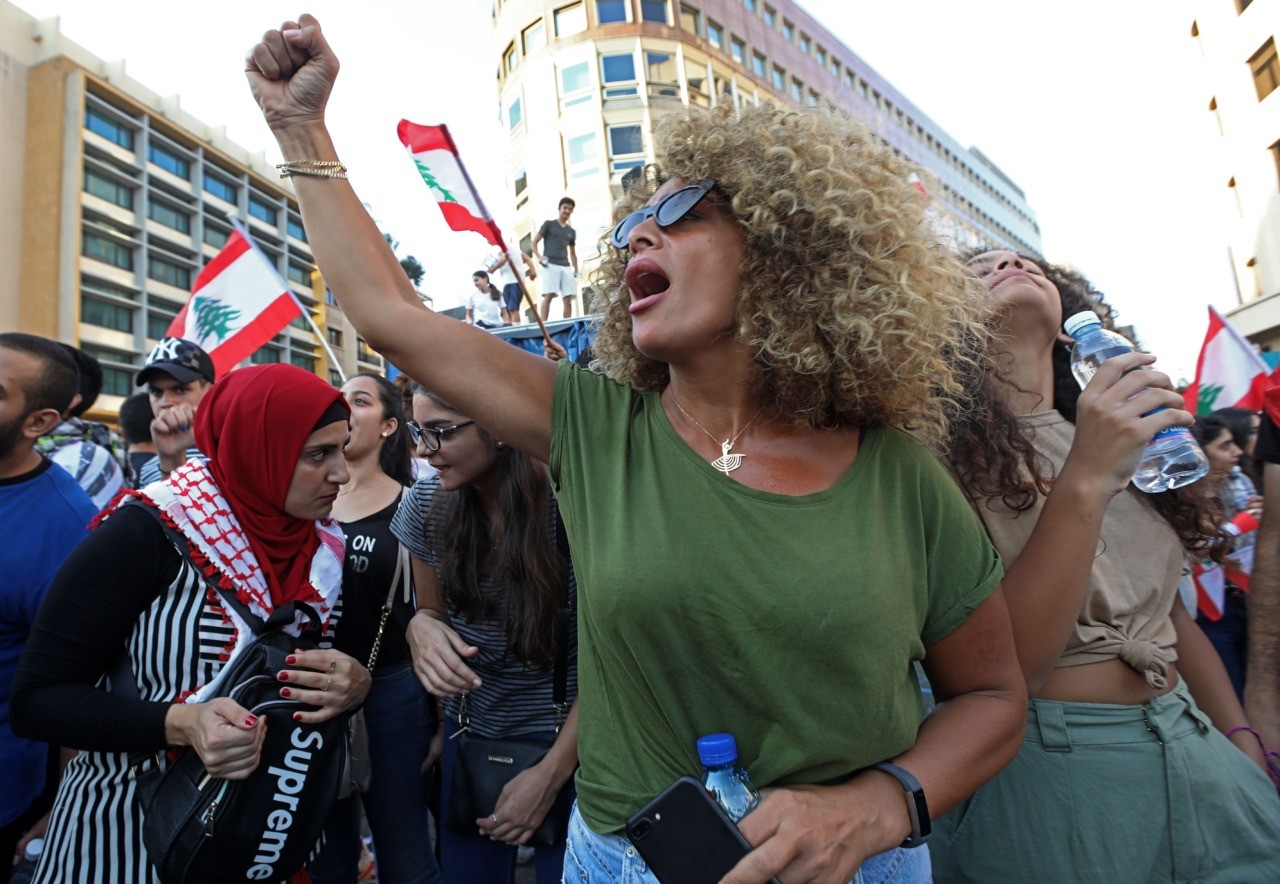 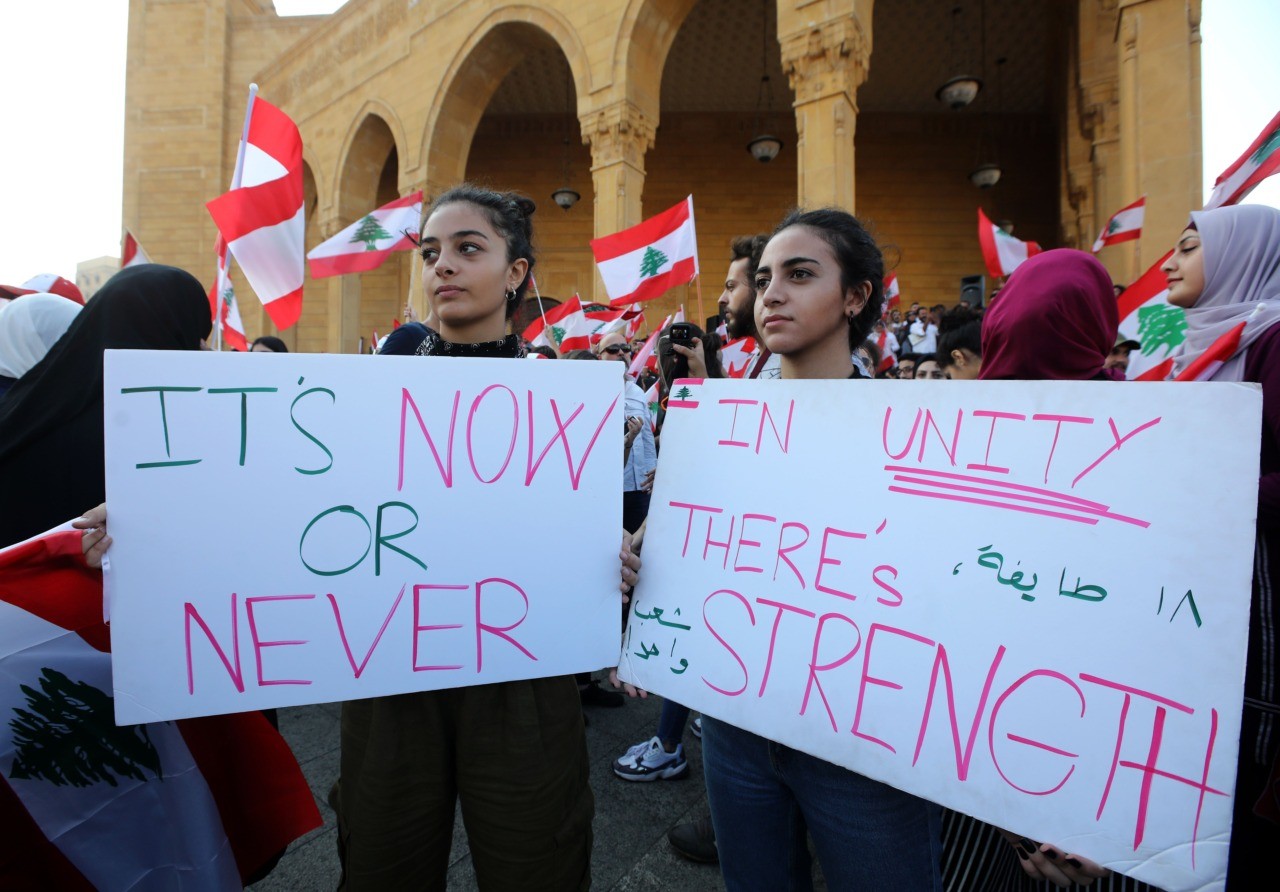 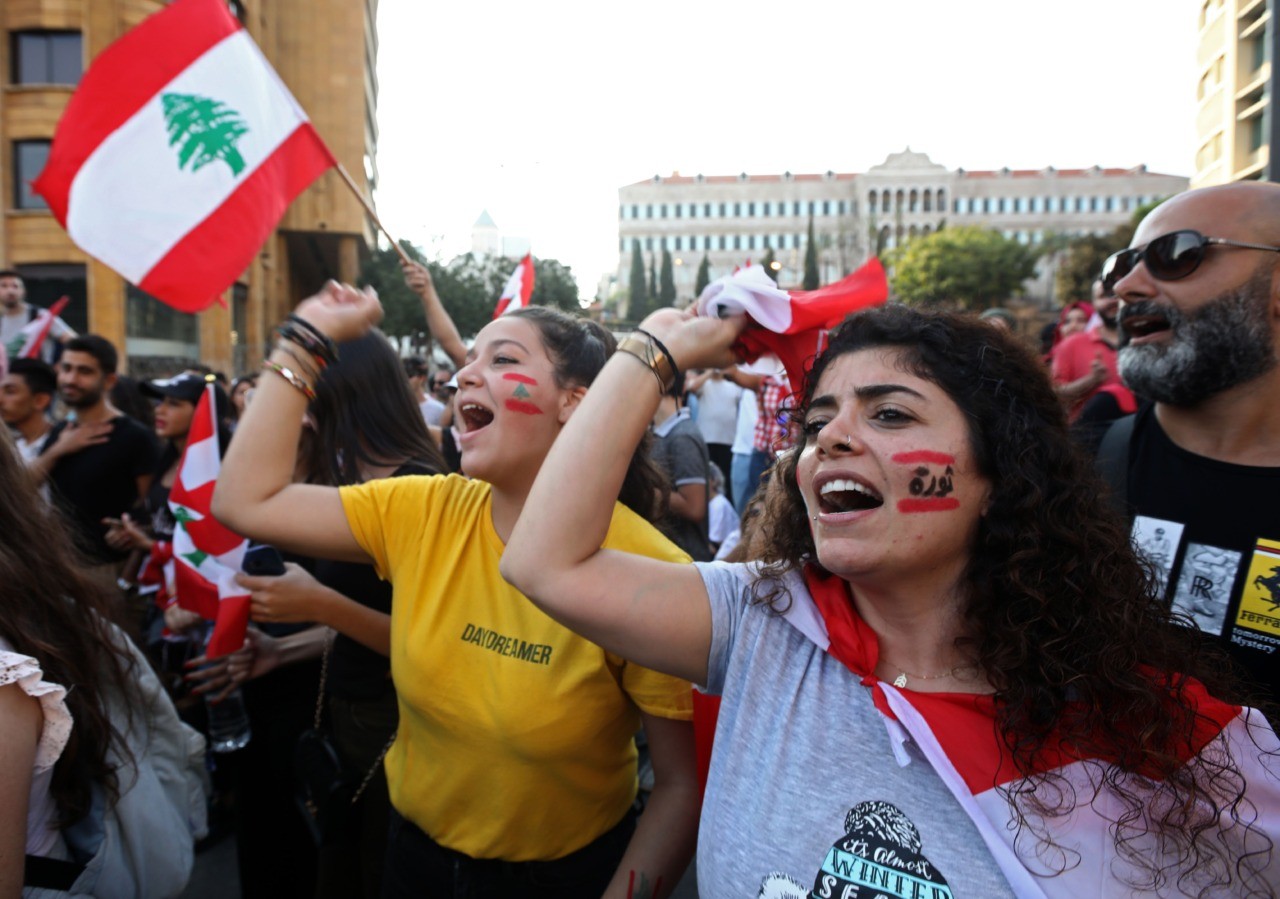 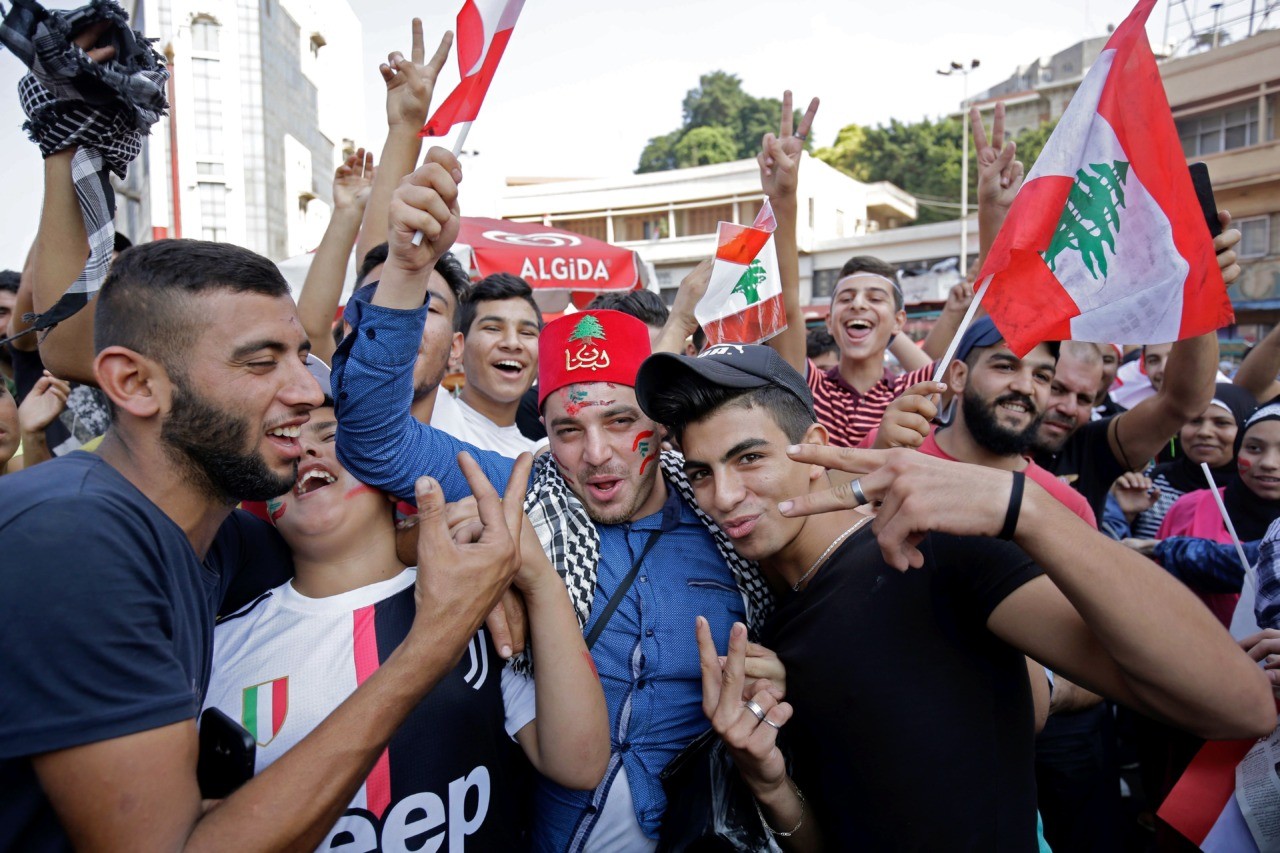 Lebanese protesters attend a rally in the northern city of Tripoli during the fifth day of demonstrations against tax increases and official corruption, on October 21, 2019. (IBRAHIM CHALHOUB/AFP via Getty Images) 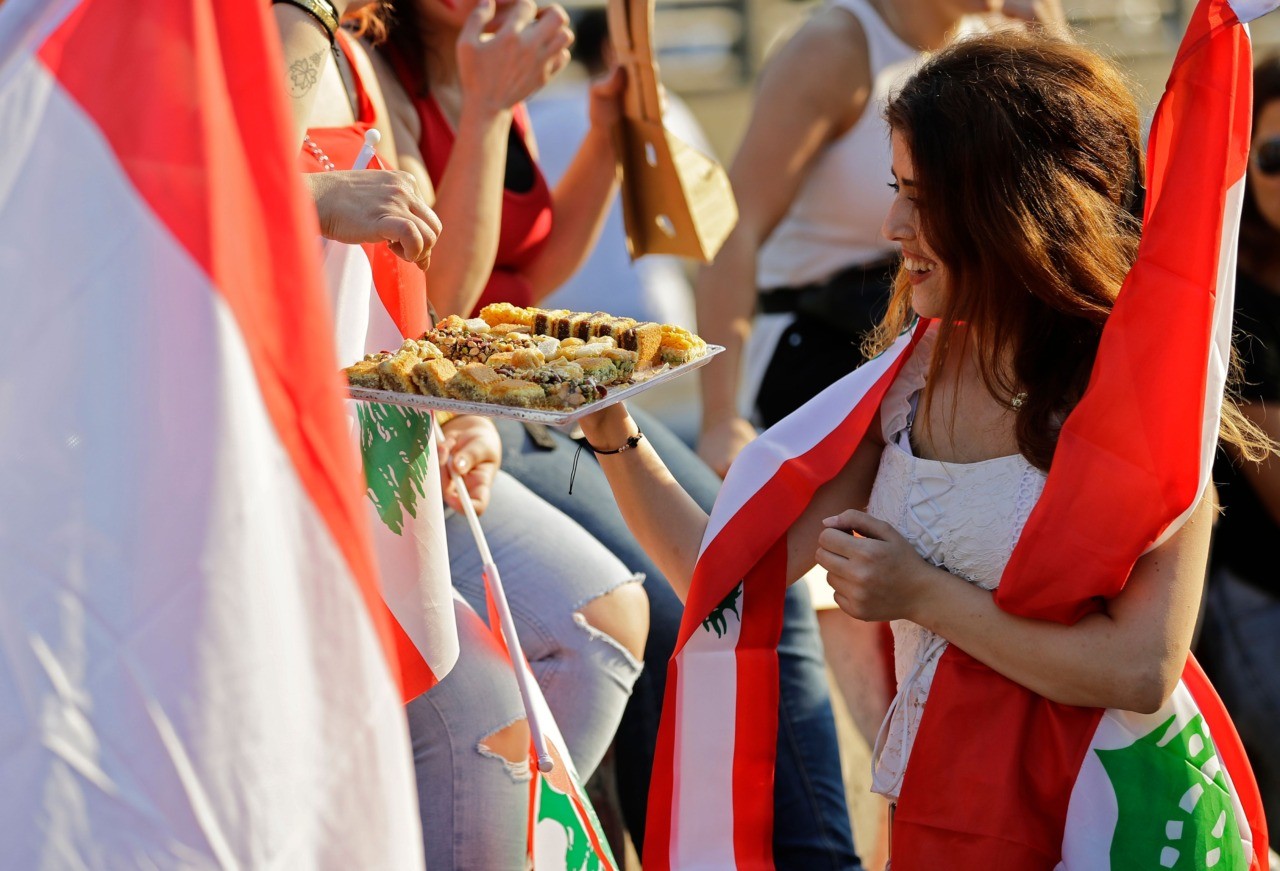 A Lebanese protester offers sweets to people during ongoing demonstrations on October 21, 2019, north of Beirut. (JOSEPH EID/AFP via Getty Images) 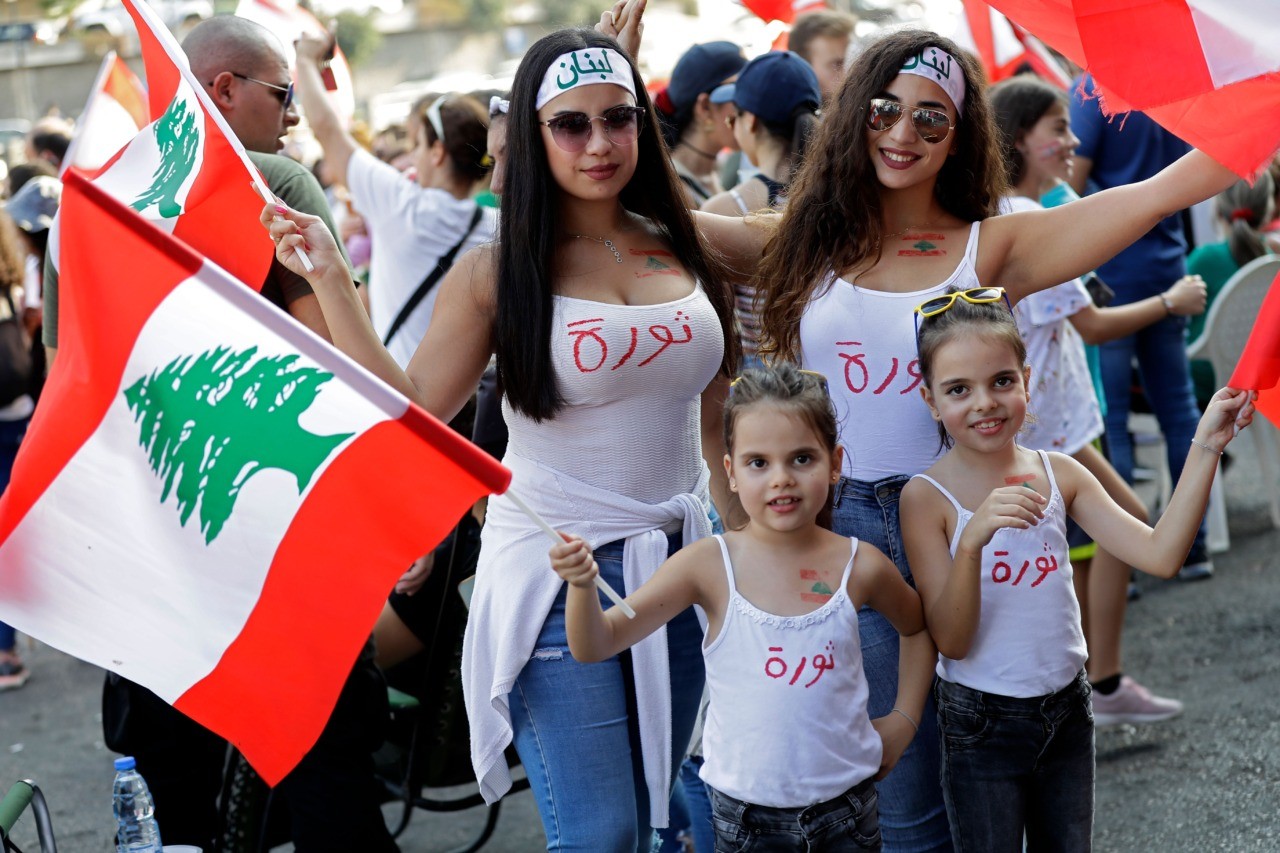 Lebanese protesters and children with he word “revolution” on their T-shirts, on October 21, 2019, north of Beirut. (JOSEPH EID/AFP via Getty Images) 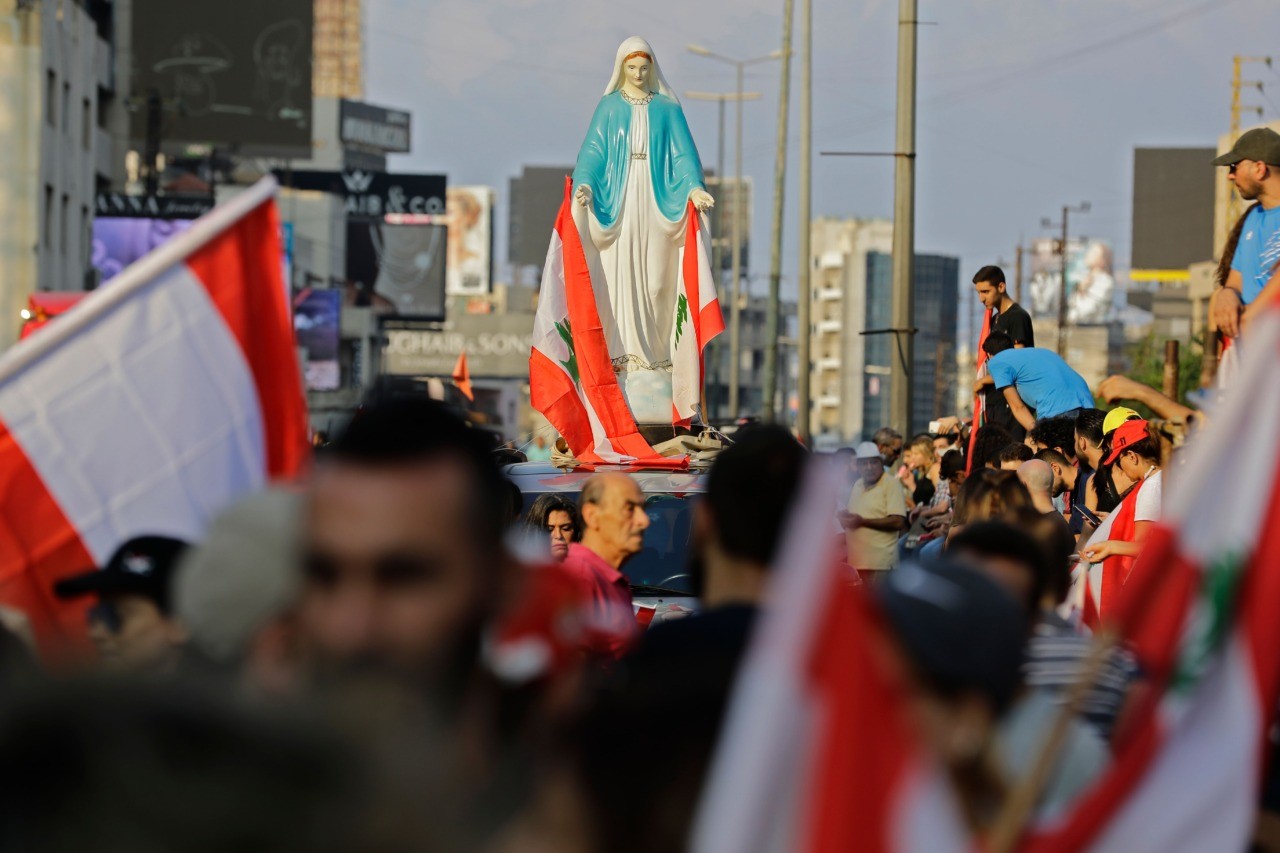 A statue of the Virgin Mary draped in the flag of Lebanon rests atop a car during a demonstration on October 21, 2019, in Beirut (JOSEPH EID/AFP via Getty Images)

Lebanon’s political system was set up to balance power between the country’s religious sects or “confessions,” including Christians, Sunni Muslims, Shiite Muslims, and Druze. But critics say Lebanon’s confessional system of government has the unintended consequence of entrenching political patronage and pitting citizens against each other along sectarian lines. Many current senior politicians came to prominence during the country’s 15-year civil war that ended in 1990.

Lebanon’s debt-burdened economy has been on the brink of collapse for some time. Although the initial grievances of the protesters were over proposed tax hikes, the demonstrations have evolved into a massive push to unseat ruling dynasties widely seen as corrupt beyond redemption.

Lebanon’s teetering government met Monday to approve a belated economic rescue plan as thousands gathered for a fifth day of mass protests against the ruling elite. The cabinet meeting was chaired by President Michel Aoun and was expected to approve a raft of measures, including the scrapping of new taxes and a sweeping privatization program, among others.

In a television address last Friday, Prime Minister Saad Hariri gave his coalition partners 72 hours to back his rescue plan. The deadline expires at 7:00 p.m. Monday (1600 GMT), and Hariri’s wording suggested he could resign if his move failed.

Lebanon’s embattled political leaders have warned that the government’s resignation at this time would only deepen the crisis gripping the small Mediterranean country.

Schools, banks, universities, and many private businesses closed their doors Monday, both for security reasons and in an apparent bid to encourage people to join the demonstrations.

AFP contributed to this article.