NEW YORK (AP) — Regis Philbin, the genial host who shared his life with television viewers over morning coffee for decades and helped himself and some fans strike it rich with the game show “Who Wants to Be a Millionaire,” has died at 88, People magazine reported.

Philbin died Friday, just over a month before his 89th birthday. He died of natural causes, according to a family statement to the magazine.

Celebrities routinely stopped by Philbin’s eponymous syndicated morning show, but its heart was in the first 15 minutes, when he and co-host Kathie Lee Gifford — on “Live! with Regis and Kathie Lee” from 1985-2000 — or Kelly Ripa — on “Live! with Regis and Kelly” from 2001 until his 2011 retirement — bantered about the events of the day. Viewers laughed at Philbin’s mock indignation over not getting the best seat at a restaurant the night before, or being henpecked by his partner.

“Even I have a little trepidation,” he told The Associated Press in 2008, when asked how he does a show every day. “You wake up in the morning and you say, ‘What did I do last night that I can talk about? What’s new in the paper? How are we gonna fill that 20 minutes?’”

“I’m not gonna say it always works out brilliantly, but somehow we connect more often than we don’t,” he added.

After hustling into an entertainment career by parking cars at a Los Angeles TV station, Philbin logged more than 15,000 hours on the air, earning him recognition in the Guinness Book of World Records for the most broadcast hours logged by a TV personality, a record previously held by Hugh Downs. 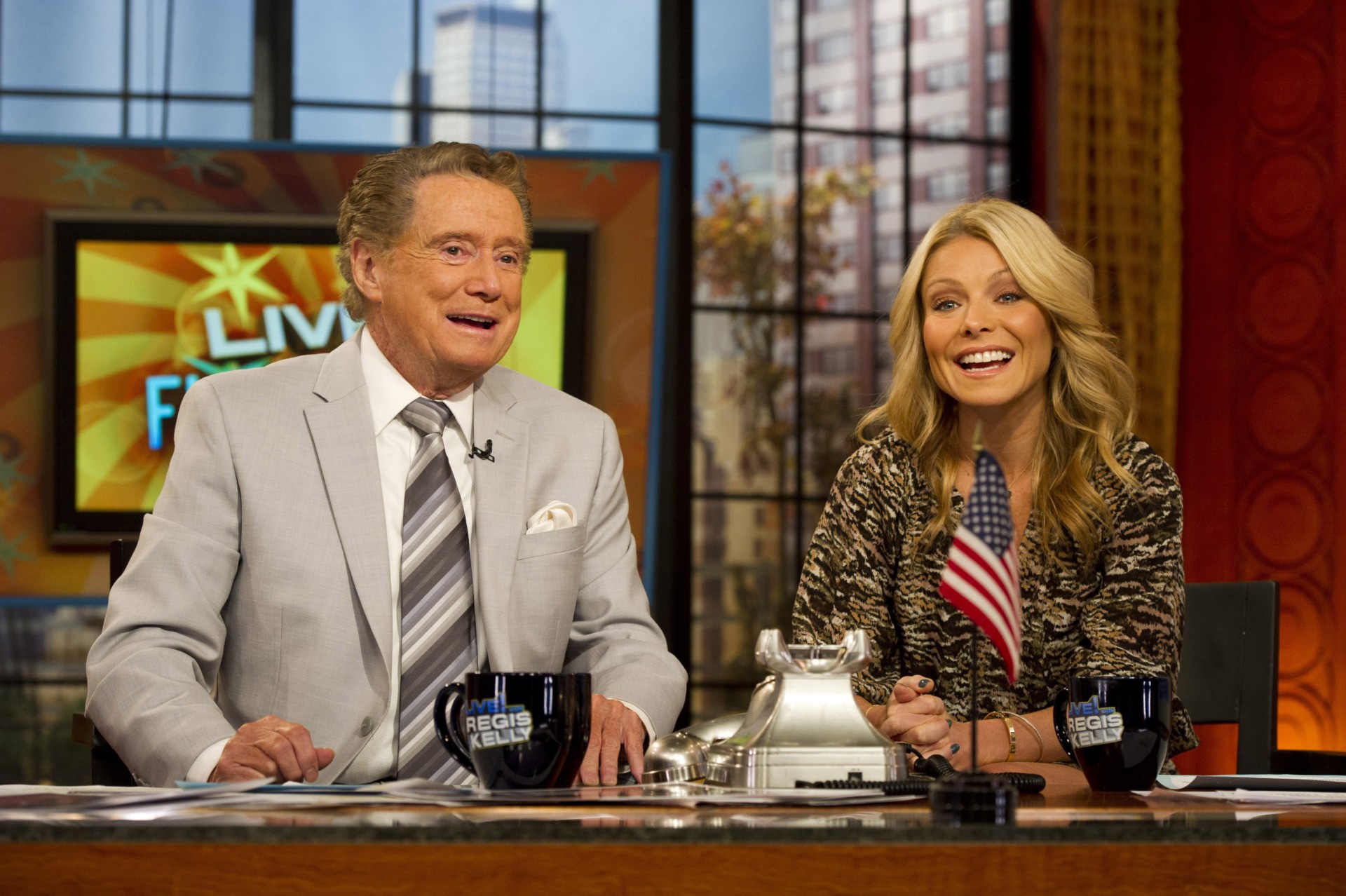 Regis Philbin and Kelly Ripa appear on set during the taping of “Live! with Regis and Kelly”, in New York, Friday, Oct. 28, 2011. (AP Photo/Charles Sykes)

“Every day, you see the record shattered, pal!” Philbin would tell viewers. “One more hour!”

He was host of the prime-time game show, “Who Wants to Be a Millionaire,” briefly television’s most popular show at the turn of the century. ABC aired the family-friendly program as often as five times a week. It generated around $1 billion in revenue in its first two years — ABC had said it was the more profitable show in TV history — and helped make Philbin himself a millionaire many times over.

Philbin’s question to contestants, “Is that your final answer?” became a national catchphrase. Philbin was even a fashion trendsetter; he put out a line of monochramactic shirts and ties to match what he wore on the set.

“You wait a lifetime for something like that and sometimes it never happens,” Philbin told the AP in 1999.

In 2008, he returned briefly to the quiz show format with “Million Dollar Password.” He also picked up the Lifetime Achievement Award from the daytime Emmys.

He was the type of TV personality easy to make fun of, and easy to love.

When his son Danny first met his future wife, “we were talking about our families,” Danny told USA Today. “I said, ‘You know that show Regis and Kathie Lee?’ And she said, ‘I hate that show.’ And I said, ‘That’s my dad.’” 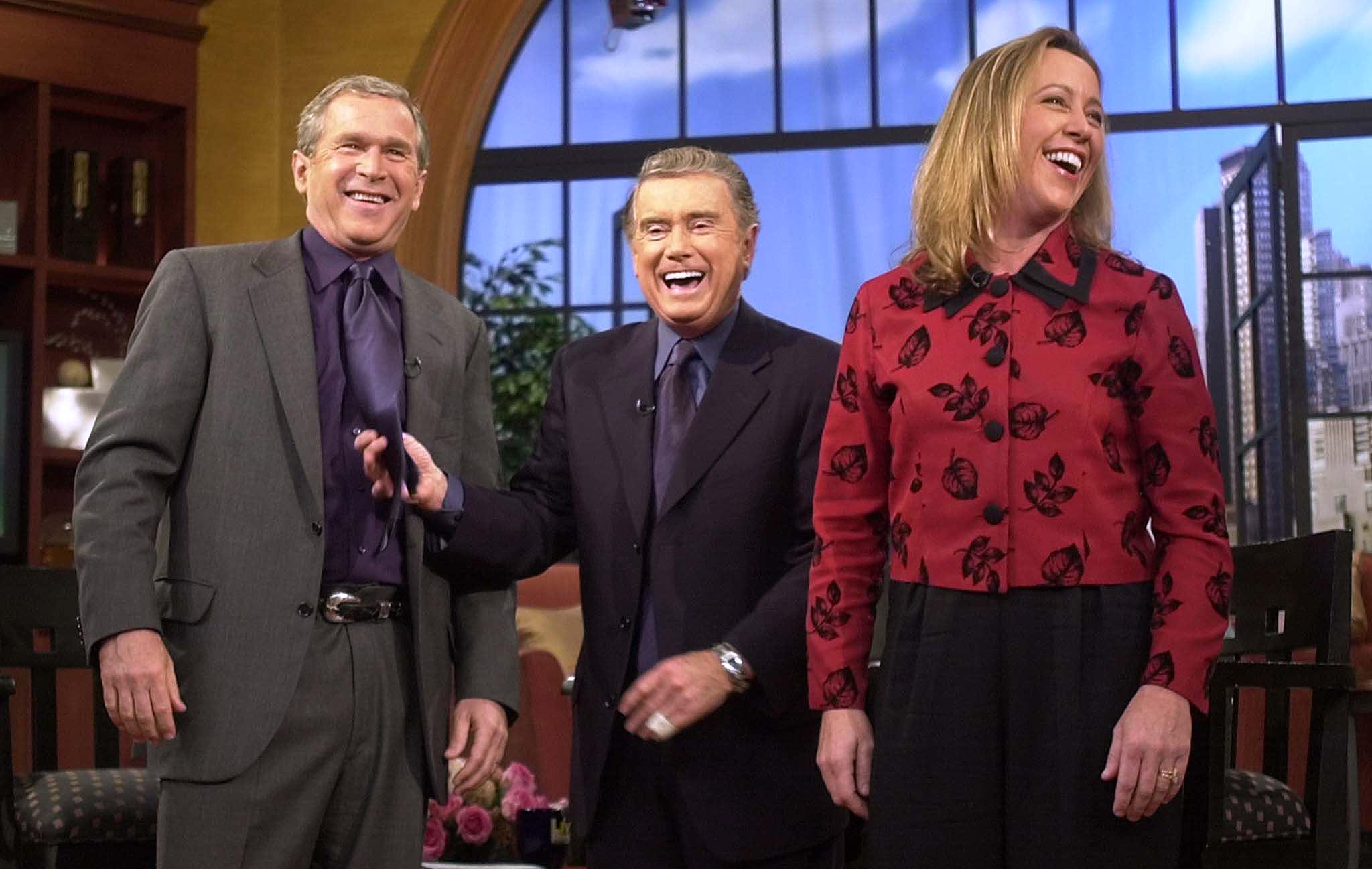 Yet Philbin was a favorite of a younger generation’s ironic icon, David Letterman. When Letterman announced that he had to undergo heart surgery, it was on the air to Philbin, who was also there for Letterman’s first day back after his recovery.

Letterman returned the favor, appearing on Philbin’s show when he went back on the air in April 2007 after undergoing heart bypass surgery.

In the 2008 AP interview, Philbin said he saw “getting the best out of your guests” as “a specialty. … The time constraints mean you’ve got to get right to the point, you’ve got to make it pay off, go to commercial, start again. Play that clip. Say goodbye.” He gave his desktop a decisive rap.

“And make it all conversational.”

Regis Francis Xavier Philbin grew up in the New York borough of the Bronx, the son of Italian-Irish parents and named for the Roman Catholic boys high school his dad attended. He went to Notre Dame University, and was such an enthusiastic alum, he once said he wanted his ashes scattered there.

After leaving the Navy in 1955, Philbin talked his way into a meeting with the stationmaster at KCOP-TV in Los Angeles. He got a job parking cars, then progressed into work as a stagehand, courier, newswriter and producer of a sports telecast. When its sportscaster didn’t show up one day, Philbin filled in.

Philbin got far more on-air experience in San Diego in the early 1960s, when KOGO-TV began producing “The Regis Philbin Show” for a national audience. The program of music and celebrity interviews was taped two weeks before each airing. It was canceled after four months.

In 1967, Philbin was hired as the announcer and sidekick to comic Joey Bishop on his network show. When he heard that he was going to be fired because of poor ratings, Philbin tearfully announced he was leaving on July 12, 1968, walking off during a live broadcast. He returned three days later after letters of support poured in.

He and Bishop had bad blood: Bishop called Philbin an “ingrate” for walking off during a salary dispute and later badmouthing him. 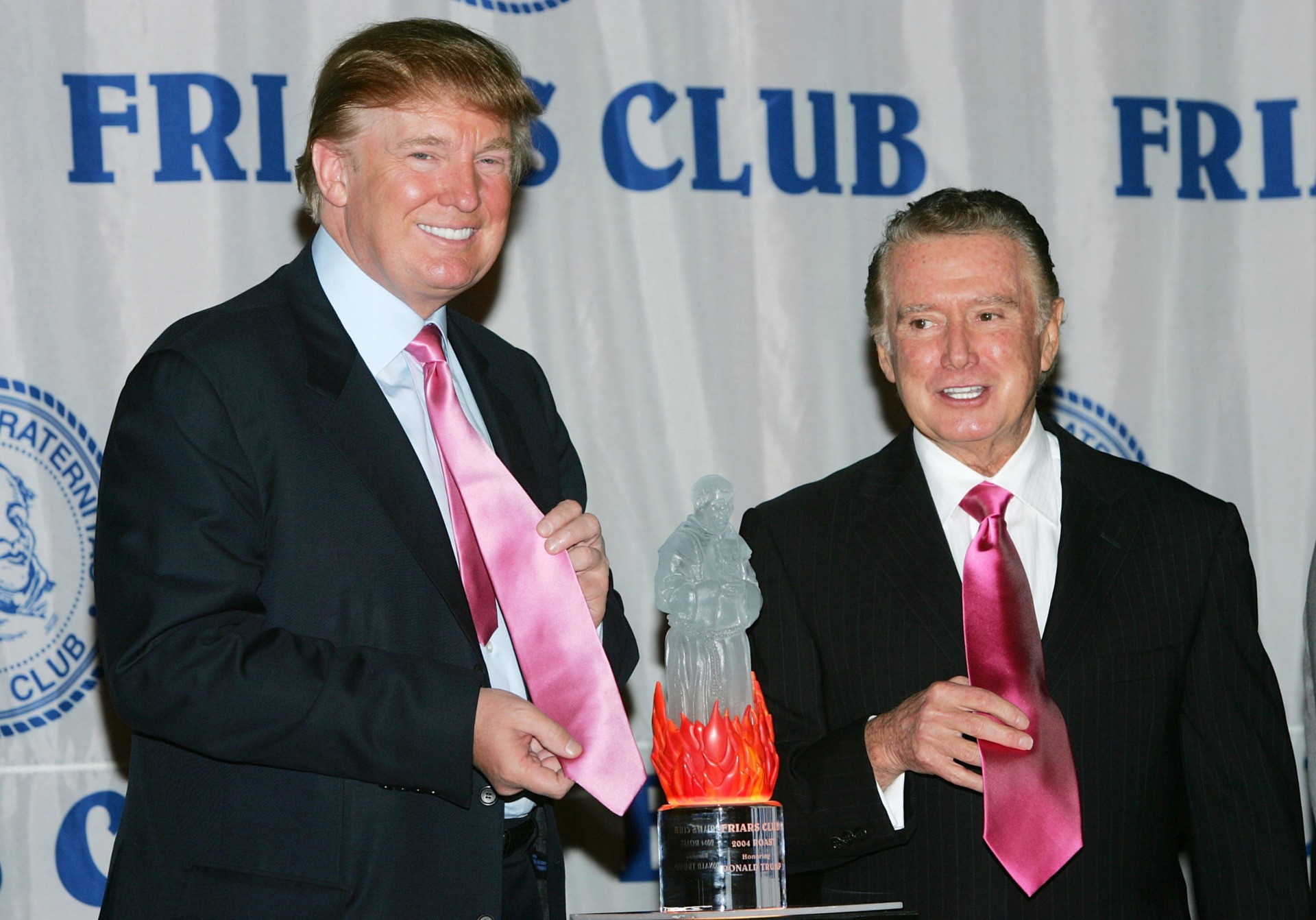 After three years of commuting to St. Louis each week for a local Saturday night show, Philbin became a star in local morning television — first in Los Angeles, then in New York. In 1985, he teamed with Kathie Lee Johnson, a year before she married former football star Frank Gifford, and the show went national in 1988.

“He’s the little guy protesting the injustices of life, from crime waves to paper cuts,” the magazine wrote. “The ranting is punctuated with Kathie Lee’s familiar cry of ‘Oh, Reege,’ uttered sometimes in sisterly sympathy and sometimes in teacherly admonishment.”

The gentle bickering and eye-rolling exasperation in Philbin and Gifford’s onscreen relationship was familiar to anyone in a long-lasting relationship.

“No arguments, no harsh words in all this time,” Philbin told a theater audience in 2000. “Well, there was the time I didn’t talk to her for two weeks. Didn’t want to interrupt her.”

Gifford left the show in 2000. After a tryout period for a replacement, soap star Ripa (“All My Children”) filled the slot.

The same hustler who parked cars in Hollywood worked just as hard to land the job on “Who Wants to Be a Millionaire.” 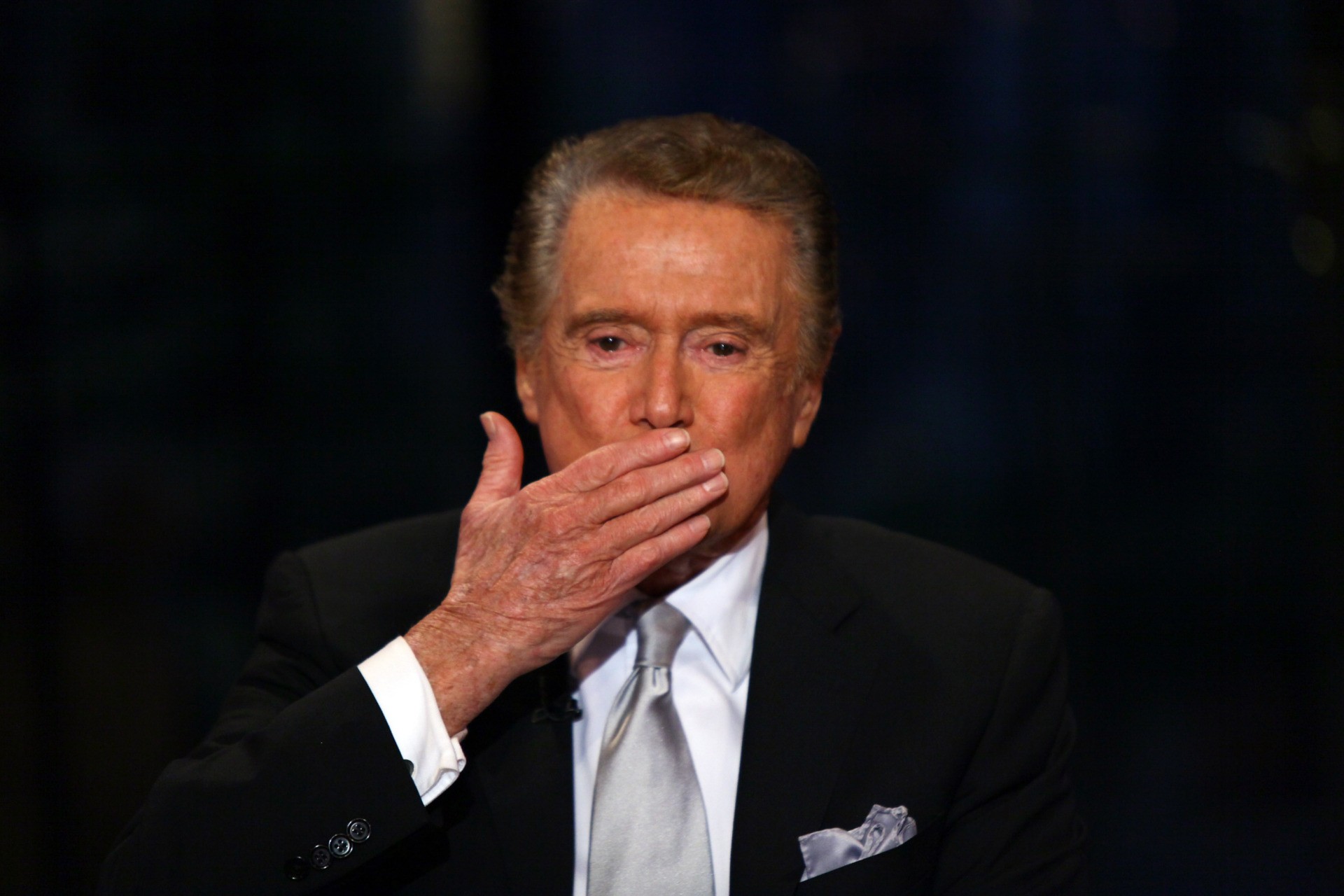 “I begged my way on,” he told People magazine. “There was a short list, and I wasn’t on it. I called my agent, and we made a full assault on ABC in L.A.”

The audience responded to Philbin’s warm, comic touch in the role. He later jokingly referred to himself as the man who saved ABC. It wasn’t complete hyperbole: ABC was suffering in the ratings before the game became a smash success. Forbes reported that two-thirds of ABC’s operating profit in 2000 was due to “Who Wants to Be a Millionaire.”

Philbin appeared to love every minute of it. Even the ultimate arbiter of hip, the MTV Video Awards, asked him to make an appearance.

“It’s better to be hot,” he told the AP. “It’s fun. I know this business. I was perfectly content with my morning show. People would ask me, ‘What’s next?’ There is nothing next. There are no more mountains for me to climb. Believe me when I tell you, all I wanted when I started this show in 1961 was to be a success nationally.”

The prime-time game burned out quickly because of overuse and ended in 2002.

Philbin enjoyed a side career as a singer that began when he sang “Pennies from Heaven” to Bing Crosby on Bishop’s show. He said a record company called him the next day, and he made an album.

Even though the series “Regis Philbin’s Health Styles,” on Lifetime in the 1980s, was part of his lengthy resume, Philbin had health issues. Doctors performed an angioplasty to relieve a blocked artery in 1993. He underwent bypass surgery in 2007 at age 75.

He’s survived by his wife, Joy, and their daughters J.J. and Joanna Philbin, as well as his daughter Amy Philbin with his first wife, Catherine Faylen, according to People.