Britney Spears knocked Hollywood culture in a recently deleted Instagram post in which she admitted that she would rather hang out with homeless people than Hollywood people.

Posting a “God Is Not Nice” meme, Spears seemed to imply that being “hot and nice” was a Hollywood trait and not a particularly pleasant one.

“Does that mean the devil is extremely hot and nice??? I’d rather hang out with homeless people than people in Hollywood … JUST SAYING!!!!” she wrote in the now-deleted post. 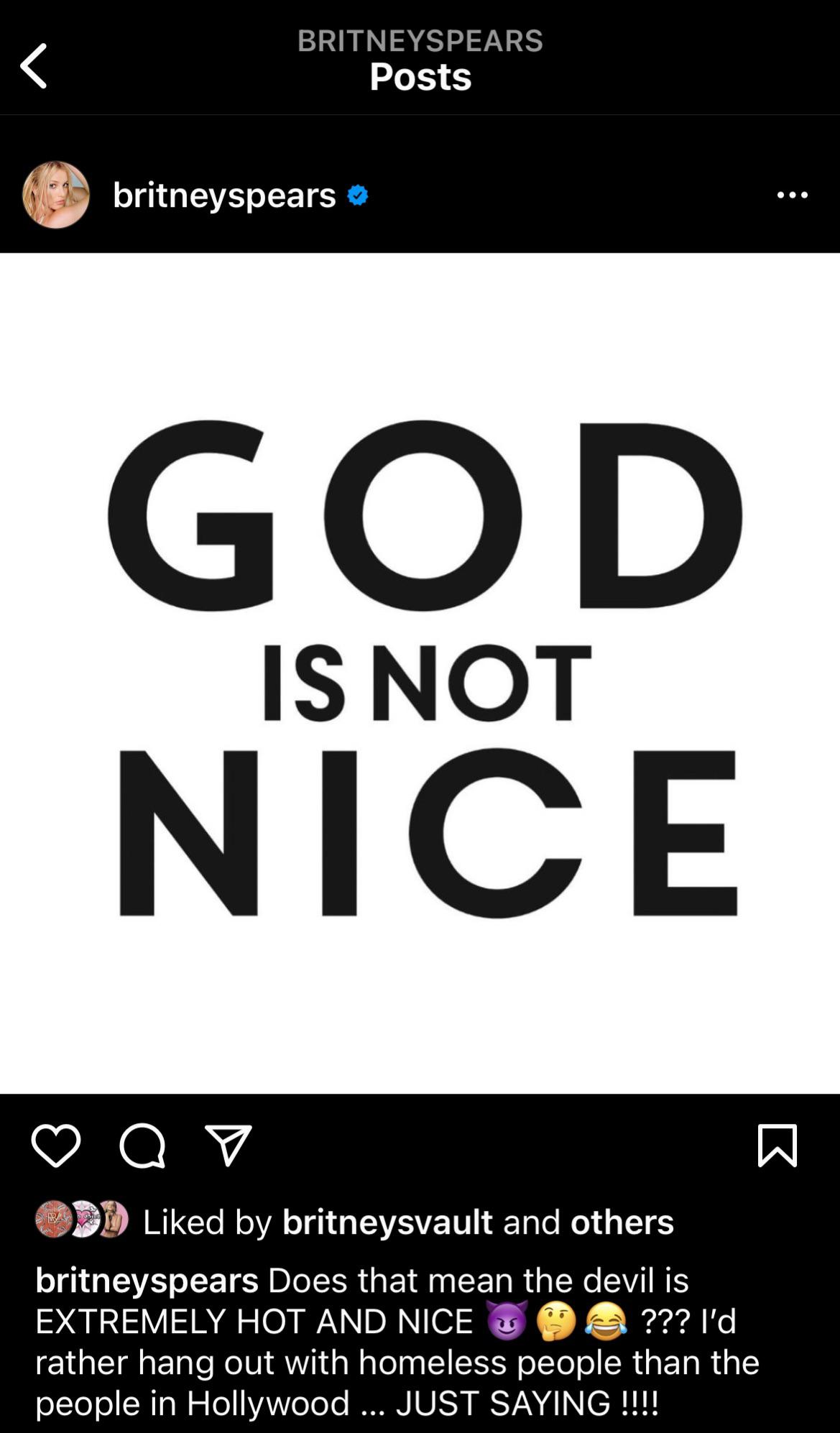 Exactly what prompted Spears’ post remains unknown but her comments knocking Hollywood comes after actress Ana de Armas said she stopped living in Hollywood due to the culture.

“This is not the place for me to be,” she said of Los Angeles.

“It became a little bit too much. There’s no escape. There’s no way out,” she added. “It’s always the feeling of something that you don’t have, something missing. It’s a city that keeps you anxious.”

Britney Spears recently married her fiance Sam Asghari following the miscarriage of what she described as a “miracle baby” in the wake of her father’s conservatorship falling, during which she was reportedly required to use an IUD to prevent conception. Both liberals and conservatives rallied to her cause at the time, with both sides noting it simultaneously violated her bodily autonomy and right to procreate. The New York Times likened such a practice to forced sterilization in line with eugenics.

“Court-condoned compelled contraception is rare in conservatorship. But the specter it raises — forced sterilization — does have a grim, extensive history in the United States, especially against poor women, women of color and inmates. In the early 20th century, the state-sanctioned practice was upheld by the United States Supreme Court,” noted the outlet.

“Eugenics was a leading rationale for female sterilization. In the 1927 case Buck v. Bell, the Supreme Court upheld the right to sterilize a ‘feeble-minded’ woman who had been committed to a state mental institution, with Justice Oliver Wendell Holmes infamously writing, ‘Three generations of imbeciles are enough,’” it continued.