Twenty-four Australians in the state of New South Wales alone have been arrested since early November for intentionally setting bushfires as a record number of blazes continue to burn across the country.

More suspects are expected to be questioned in coming days as local police work to find and apprehend culprits who have contributed to the devastating fire season, the Sydney Morning Herald reports.

Two dozen people were charged with deliberately setting fires, while 184 people have been charged or cautioned for bushfire-related offenses, according to the New South Wales Police Force.

In addition to those facing the most serious charges of starting fires intentionally, authorities said another 53 people are facing legal action for not complying with the state’s fire ban and 47 people have faced legal action for discarding a lit cigarette or match on land.

Starting a bushfire intentionally and being reckless in causing its spread can result in up to 21 years in prison, authorities said.

Legal actions can range “from cautions through to criminal charges,” according to NSW police.

The story of man-made fires is the same right across the country, as the Australian newspaper reports. 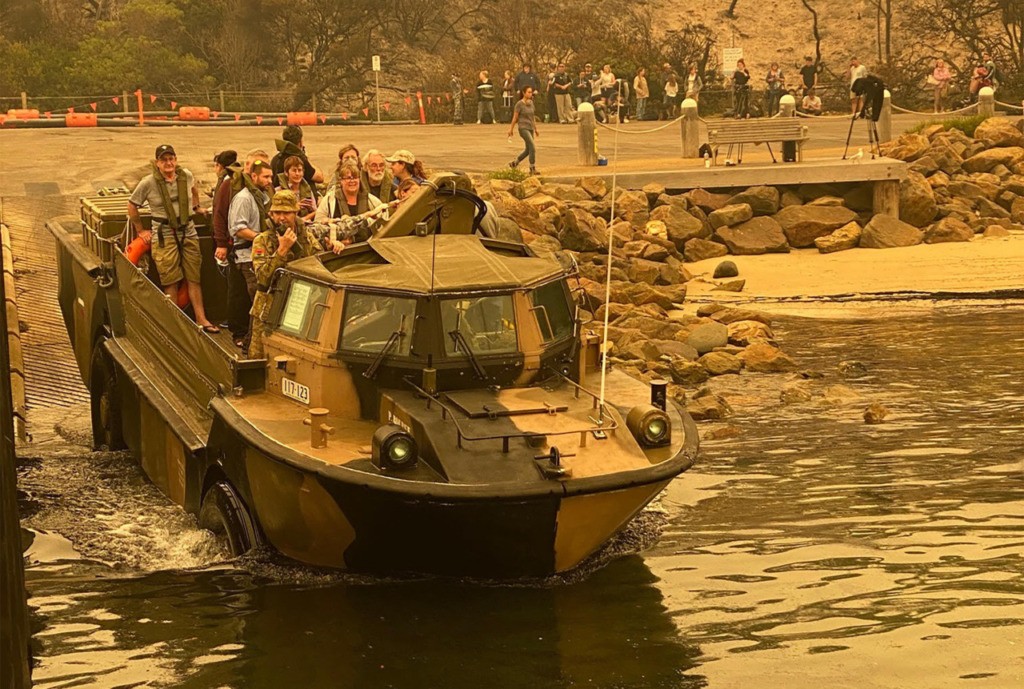 Evacuees are transported in a lighter, amphibious, resupply, cargo (LARC) transport amphibious vehicle, from Mallacoota, Victoria, Australia. Navy ships plucked hundreds of people from beaches and tens of thousands were urged to flee before hot weather and strong winds in the forecast worsen Australia’s already-devastating wildfires. (Australia Department of Defense via AP)

Queensland state police say 101 people have been picked up for setting fires in the bush, 32 adults and 69 juveniles.

In Tasmania, where fires have sprung up in the north of the state and outside Hobart, five were caught setting fire to vegetation. Victoria reported 43 charged for 2019.

Meanwhile, the University of Sydney estimated 480 million animals have perished in the most populous state of New South Wales alone.

“The fires have also been devastating for Australia’s wildlife and wild places, as vital areas of bush, forests and parks have been scorched and many millions of animals killed or injured,” Dr. Stuart Blanch, senior manager land clearing and restoration with World Wildlife Fund-Australia, told ABC News. “Until the fires subside the full extent of damage will remain unknown.”

As Breitbart News reported, the link between arsonists and the deadly fires that devastate Australia every summer is well known and documented, with the rate of deliberately lit fires escalating rapidly during the school holiday period.

Dr Paul Read, co-director of the National Centre for Research in Bushfire and Arson, said the great majority of Australian bushfires are deliberately lit by “cunning, furtive and versatile criminals,” reports ABC News.

“About 85 per cent are related to human activity, 13 per cent confirmed arson and 37 per cent suspected arson,” he said. “The remainder are usually due to reckless fire lighting or even just children playing with fire.”

Dr Read said holidays and summer were a bad combination when it came to criminal fire starters.

“School holidays are a prime time for fire bugs, but especially over summer,” he said. “The kids have got time to get out there and light, and the most dangerous adults choose hot days.”

UPDATE:  This story has been amended to reflect new information about arson as reported by the Australian.