ROME — The Vatican extinguished the lights of the dome and the facade of St. Peter’s Basilica for an hour on Saturday night in commemoration of “Earth Hour 2021.”

From 8:30pm to 9:30pm the iconic basilica was darkened as a symbolic gesture against climate change, joining monuments of cities across the globe that turned off their lights as well. Vatican News reported that the act was performed “to demonstrate the serious global climate crisis.”

Earth Hour is an initiative launched by the World Wildlife Fund (WWF) in 2007 to call attention to the gravity of the “climate crisis” by symbolically abstaining from the use of energy for an hour. It began in Sydney, Australia, but quickly spread all over the globe and now each year more than 10,000 landmarks and monuments switch off their lights.

Vatican News noted that Earth Hour is billed as the “largest global mobilisation against climate change” and is intended to “unite citizens, institutions and businesses in a common desire to give the world a sustainable future and to overcome the challenge of climate change.”

According to Earth Hour official propaganda, millions of people in more than 180 countries and territories take part in the annual ritual, switching off their lights to show support for the planet.

Earth Hour “has become a catalyst for positive environmental impact, driving major legislative changes by harnessing the power of the people and collective action,” it claims.

The WWF has plenty of critics, even among True Believers in the evils of climate change. The Copenhagen Consensus Center, for instance, a “think tank that researches and publishes the smartest solutions for the world’s biggest problems,” declares that the Earth Hour project “is nothing but an ineffective feel-good event.” 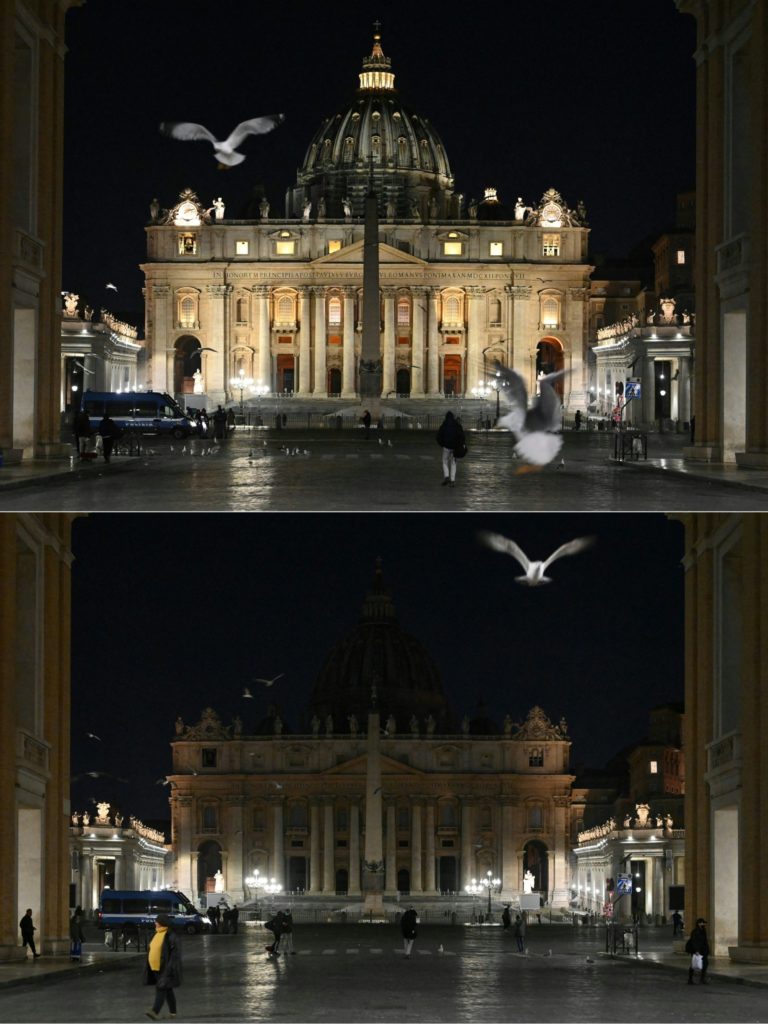 This combination of pictures created on March 27, 2021 shows St. Peter’s Basilica in The Vatican on March 27, 2021 before (Top) and after (Bottom) the lights were turned off for Earth Hour. ( VINCENZO PINTO/AFP via Getty Images)

Earth Hour “does little for the climate in terms of reducing CO emissions and distracts us from the real problems and solutions — especially giving light to those in the darkness,” the Center states on its website.

Even the liberal journal Slate has criticized Earth Hour, saying that its “vain symbolism reveals exactly what is wrong with today’s feel-good environmentalism,” while others have said that the symbolic act “celebrates ignorance, poverty and backwardness” and promotes the idea that “civilization is something to be ashamed of.”

Many scholars have expressed deeper concerns with Earth Hour that go to the very heart of the modern environmentalist movement itself, suggesting that the initiative is just one more senseless activity encouraging an obscurantist attitude toward the benefits of modern energy and technology.

The Ayn Rand Institute, for instance, suggests that Earth Hour exploits ignorance of the vital importance of energy, sending “the comforting-but-false message: Cutting off fossil fuels would be easy and even fun! People spend the hour stargazing and holding torch-lit beach parties; restaurants offer special candle-lit dinners. Earth Hour makes the renunciation of energy seem like a big party.”

Observing Earth Hour “bears no relation whatsoever to what life would actually be like under the sort of draconian carbon-reduction policies that climate activists are demanding: punishing carbon taxes, severe emissions caps, outright bans on the construction of power plants,” wrote Dr. Keith Lockitch, a physicist with postdoctoral research in relativistic astrophysics.

“The lights of our cities and monuments are a symbol of human achievement, of what mankind has accomplished in rising from the cave to the skyscraper,” says Lockitch. “Earth Hour presents the disturbing spectacle of people celebrating those lights being extinguished.”