Tracy Stone-Manning, President Joe Biden’s nominee to lead the Bureau of Land Management (BLM), helped edit a radical environmental newsletter that advocated for violent action and sought to further the mission of the extremist group Earth First!, whose members committed acts of ecoterrorism in the 1980s and 1990s.

Stone-Manning testified that she “helped edit” a local Earth First! newsletter called the Wild Rockies Review while she was a graduate student at the University of Montana in Missoula 30 years ago.

Though the editors and contributors of the Wild Rockies Review at that time frequently used pseudonyms or just last names to avoid legal consequences for their writings, multiple issues listed a “Stone” under “Assistance” on their mastheads. Stone-Manning went by “Tracy Stone” before she was married.

One such issue was the “Autumnal Equinox Issue,” labeled Vol. 1, No. 3. Also named under “Assistance” on that issue’s masthead was Stone-Manning’s classmate Bill Haskins, who was one of seven, including Stone-Manning, who were subpoenaed in 1989 over a tree spiking crime.

The Autumnal Equinox Issue included an obscene letter to the editor advocating violent action, and potentially assassination, against government officials. The letter began, “Dear Weeniewanker, What is all this pussyfooting bullshit about sensitive treatment of Forest Service pigdogs who ream our public lands”: 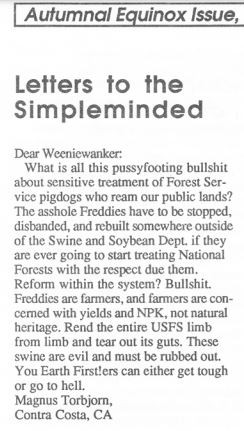 “Rend the entire USFS [U.S. Forest Service] limb from limb and tear out its guts,” it continued. “These swine are evil and must be rubbed out.”

On page 13 of the same issue, an article outlined steps Earth First! followers needed to take to prevent the building of a road in Idaho’s Clearwater National Forest, the same forest that was later the target of the 1989 tree spiking crime that Stone-Manning was involved in.

Stages one and two of the article’s plan included contacting stakeholders to express opposition to building the road, as well as suing those stakeholders when necessary. Stage three resorted to physically blocking the project work “with non-violent civil disobedience actions, and a few new tactics.” Stage four ominously only instructed readers, “Use your imagination!”

“Remember, we’re in at Stage 1 now. Let’s hope we don’t make it to Stage 4, but be prepared!” the article stated. 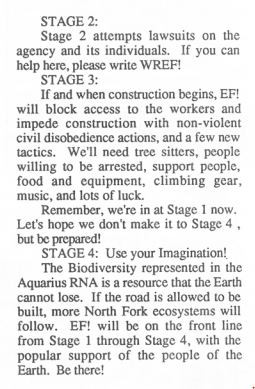 An article on page five of this issue, titled “$ummer Fire$ Up in $moke,” strikes a tune similar to that of a recent Harper’s Magazine article written by Stone-Manning’s husband suggesting homes in wildfire-prone areas ought to be left to burn as a consequence of perceived poor construction and zoning decisions. Stone-Manning last year shared her husband’s 2018 article on her social media and described it as a “clarion call.”

The Wild Rockies Review article asked, “Who really is responsible for a cabin that is consumed by wildfire?”

“Stone” was again listed on the masthead of the 1989 “Spring Equinox Issue,” labeled Vol. 2, No. 1. That issue’s lead editorial included a defense of the criminal acts of tree spiking and monkeywrenching.

Tree spiking is a form of sabotage — and an act of ecoterrorism as defined by the FBI — in which metal spikes are hammered into trees to prevent loggers from harvesting them. Tree spikes have been known to destroy expensive logging equipment and cause injury to the loggers or millworkers processing the spiked trees. Monkeywrenching is any tactic used by saboteurs to prevent what they believe to be environmental destruction, and the term can encompass acts of ecoterrorism. 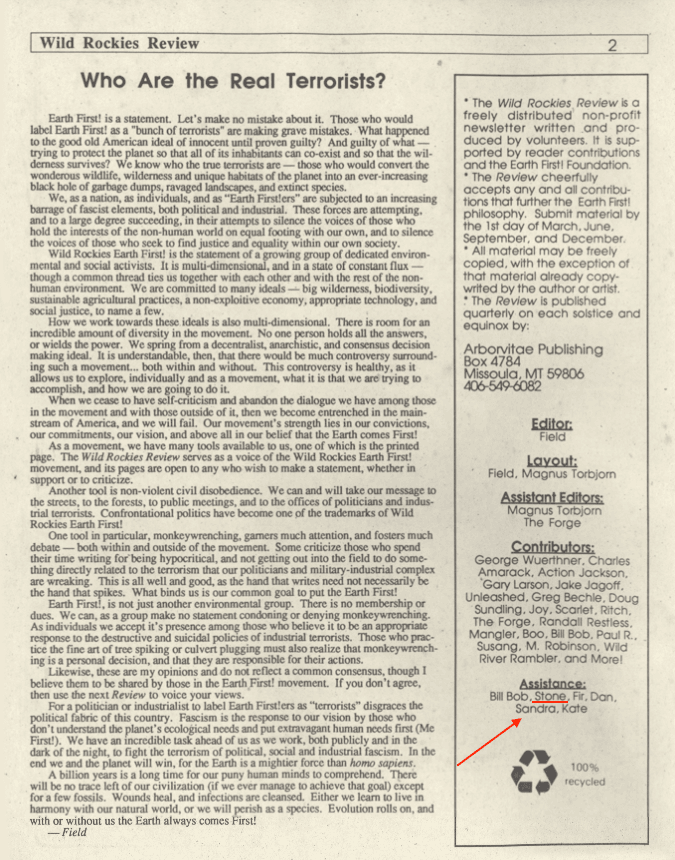 The editorial, titled “Who Are the Real Terrorists,” promoted “confrontational politics” like “non-violent civil disobedience” and then stated, “We can, as a group make no statement condoning or denying monkeywrenching.”

“Some criticize those who spend their time writing for being hypocritical, and not getting out into the field to do something directly related to the terrorism that our politicians and military-industrial complex are wreaking,” the editorial continued. “This is all well and good, as the hand that writes need not necessarily be the hand that spikes. What binds us is our common goal to put Earth First!”

The editorial described tree spiking as a “fine art.”

Also in the Spring Equinox Issue is a letter to the editor from “Sick of Talk” calling for monkeywrenching. “What stops a road? Sand in an engine. What stops a saw? Metal and clay,” the letter read. “We know monkywrenching [sic] works. So do it. Often. You can go join an organization if you just want to talk”: 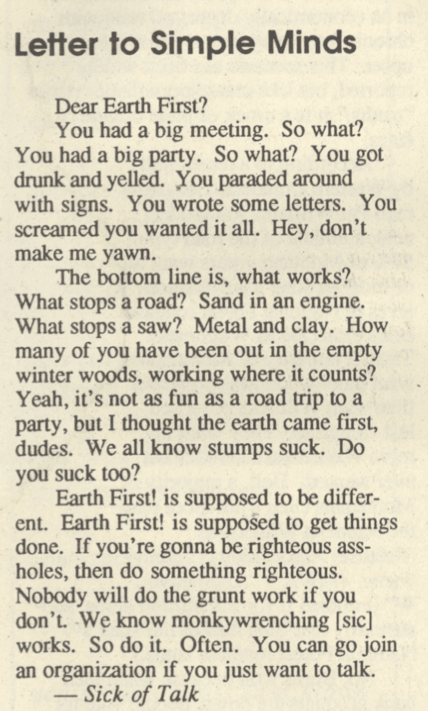 Later in that same issue, an ad appeared for an anonymous radical newsletter called Live Wild or Die and indicated that Earth First! chapters distributed the journal. Live Wild or Die has often been described as the “most radical” of the activist publications circulating during that time period. One particular 1989 issue of Live Wild or Die contained an “Eco-Fucker Hit List,” which later became associated with Ted Kaczynski, better known as the Unabomber. 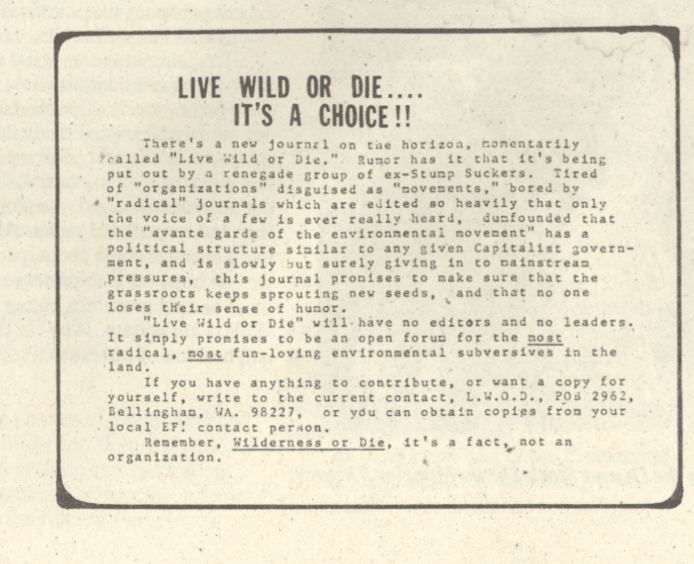 The list was actually a reprint from a wilderness conference and contained names of conference cosponsors and committee members.

According to several reports from 1995–1996, Kaczynski possessed a copy of the “Eco-Fucker Hit List” and may have used it to target some of his victims. One of Kaczynski’s bombs was mailed to the organization at the top of the “Ec0-Fucker Hit List,” the Timber Association of California, which had changed its name to the California Forestry Association. The bomb package killed California Forestry Association President Gil Murray while he was at work in 1995.

As Breitbart News reported, Kaczynski granted his first media interview after his arrest to the then-editor of the Earth First! journal and praised the group during the interview as being like-minded. He even characterized himself as being an “Earth Firster satellite.”

Bruce Vincent, who runs a fourth generation logging business called Vincent Logging, testified before Congress in 1998 that he had been the target of ecoterrorism in Montana beginning in 1989. Vincent stated that he had been featured in a skit performed by a “group in Missoula, Montana,” in which he was shot and killed to save animals. He said he also received anonymous threatening letters and phone calls, and he explained instances in which his bulldozer and trucks were tampered with, which created dangerous scenarios for the equipment operators.

Vincent spoke with Breitbart News about the Missoula-based environmental activist community that Stone-Manning was a part of. “The school of environmental activism down there, the University of Montana, had some real issues then,” he said, adding those issues included “believing that it was okay to go to the extreme in order to make points, political points.”

Vincent recalled that environmental extremists during the height of the “timber wars” — which the ongoing battles between loggers and activists were often called — caused “tens of millions of dollars” in damage to forestry equipment throughout the west. “Their goal was to put us out of business by making us uninsurable,” he said.

Asked about Earth First! specifically, Vincent asserted, “They were a terror group. Terror is real.” He specifically referenced a satirical article that the Earth First! journal (which is separate from the Wild Rockies Review) printed in 1989 advocating for ecoterrorism suicide missions.

“Are you terminally ill with a wasting disease? Do you have AIDS, ALS, brain cancer, or syphilis?” the article read. “Don’t go out with a whimper; go out with a bang! Undertake an ecokamikaze mission.”

Vincent said, “When they printed tongue-and-cheek the article on ‘ecokamikazes’ … that is not simply a very vigorous conservation group. That is ecoterror.” He said of the group’s reputation, “Back then, Earth First! wanted to blow up the systems that were collaborating.”

Stone-Manning, who is now serving as senior policy adviser for the National Wildlife Federation, said in 2013 that she ultimately left Earth First! because the group members were “angry,” according to the Missoulian. She said, “Anger doesn’t do much. It doesn’t solve problems. What I do is solve problems.” She also at that time denied having a role in the 1989 tree spiking crime except for sending a letter on behalf of a “disturbed man” because she “didn’t want anyone to be hurt.”

As Breitbart News reported on the tree spiking case:

In 1989, Stone-Manning mailed a letter to the U.S. Forest Service on behalf of John P. Blount, an individual in her “circle of friends,” crudely warning federal authorities that trees in Idaho’s Clearwater National Forest that were scheduled to be cut down had been sabotaged with metal spikes to prevent them from being harvested.

After the Forest Service received the warning letter, Stone-Manning and six other individuals in Missoula were the target of a 1989 grand jury investigation for which they were subpoenaed and required to submit fingerprints and hair samples. However, the 1989 grand jury did not uncover enough evidence to charge Blount or anyone else with the crime. The case was not solved until Blount’s ex-[wife] reported him to authorities two years later, and in doing so, also named Stone-Manning as the person who mailed the letter for him. In exchange for immunity, Stone-Manning testified in the 1993 trial against Blount, who was convicted for the tree spiking crime and sentenced to 17 months in prison.

Former BLM Acting Director William Perry Pendley references interviews in which Stone-Manning admits she did not come forward about her knowledge of Blount’s 1989 tree spiking until her 1993 testimony. Stone-Manning later filled out a questionnaire for her Senate confirmation hearing with inaccuracies related to the tree spiking case.

Amid renewed scrutiny over her involvement with Earth First! and with the 1989 tree spiking case, Stone-Manning’s confirmation for BLM director remains in flux. No vote has been scheduled for it as of the time of this writing, and most Democrats have remained silent on her nomination despite outspoken opposition from Republicans.

The objections to Stone-Manning were reinforced this week after two individuals directly involved with the 1989 tree spiking came forward with corroborating accounts of Stone-Manning’s role in the crime.

Retired Forest Service special agent Michael Merkley, who led the investigation of the case at the time, wrote an accusing letter Wednesday to the Senate Energy and Natural Resources Committee about the nominee. He charged that she was “not an innocent bystander” but in fact helped in the planning process and allowed the crime to be carried out and remain unsolved for four years before coming forward in exchange for immunity.

The second individual, Blount, who was convicted in the tree spiking case, said to E&E News that Stone-Manning knew about his plan “far in advance.” He indicated she was not “heavily” involved in the planning and in the actual spiking of the trees but that she had a central and “agreed-upon” role in the operation as the letter deliverer.

As for Stone-Manning’s role in the Wild Rockies Review publications specifically, attempts to reach the nominee for comment through both the Department of Interior and the National Wildlife Federation were unsuccessful.