A gunman has been arrested after forcing his way into a Dutch television studio, declaring that he was heavily armed.

The young man, believed to be 19 years old, demanded that the national television broadcaster NOS put him on the air, the Telegraph reports. He claimed to be a member of a hacker’s collective working for Dutch intelligence.

Smartly dressed in a black suit and tie, he forced his way into the studios after threatening a security guard with a pistol, forcing the man to show him upstairs and into the editorial offices.

Footage which was later shown on Dutch TV showed the teenager pacing the studio, pistol held behind his back, saying “This is taking too long”.

Cameras remained recording as he paced back and forth in front of them. Speaking to a man off camera, the suspect said: ‘The things that are going to be said (pause) those are very large world affairs. We were hired by the security service.’

The drama ended when police stormed into the studio yelling at the man:  “Drop it! Drop it! And get on your knees!”. 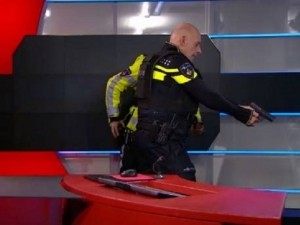 He then dropped the gun, saying “I dropped it. It’s dropped” before police put him in handcuffs and took him away.

There was no immediate indication that the incident was terror related, and the motives behind the attack remain unclear. However, NOS television said the man appeared to be a student who had recently lost both parents and said he was not featured on security services’ lists of suspected Islamist militants.

A spokeswoman from the Dutch police confirmed a man had entered the studios at around 7pm GMT.

He had a letter which reportedly read: “I am heavily armed. If you just cooperate nicely, then nothing will happen.”

The gunman was directed to an empty studio, where he was arrested around 10 minutes later and taken away by police. But the situation, which was brought to a speedy resolution, meant that the evening edition of the NOS news was not broadcast. On receiving the alert, police quickly surrounded the building in Hilversum and evacuated staff. No shots were reported to have been fired.

NOS, which produces the most widely watched television news programme in the Netherlands, was off air for just over an hour. Those who tuned in to watch the programme were instead left with a message that said: “In connection with circumstances, no broadcast is available at this time”.

Police spokeswoman Christine Scholts said that special forces were sweeping the building for explosives and to ensure the man had acted alone and no accomplices were left hiding in the building.

“We are currently investigating who this man is and what he wants,” she said adding that the police were looking into claims that he had accomplices around the country with explosives.

“He took the security guard hostage and said he wanted air time. If they didn’t give it to him, he said there would be bombs in different places in the Netherlands that would explode if he didn’t get time on TV,” Ms Scholts said.

Prosecutor Johan Bac told a press conference the man, who has been named as Tarik Zahzah, was being questioned and could be charged with kidnapping, possession of a firearm and threatening people with a weapon.