In his November 15 essay, Dr. Donohue declares that Archbishop Gomez is under attack by “left-wing Catholics and outside activists” for a powerful speech he gave in Spain on November 4th.

As Breitbart News reported at the time, Gomez denounced what he called a deliberate effort by elite forces “to erase the Christian roots of society and to suppress any remaining Christian influences.”

In his condemnation of “cancel culture” and “political correctness,” Gomez said that “often what is being canceled and corrected are perspectives rooted in Christian beliefs — about human life and the human person, about marriage, the family, and more.”

According to Donohue, left-wing elites were particularly angered over the archbishop’s comments on contemporary social justice movements, which he labeled as “pseudo-religions.” 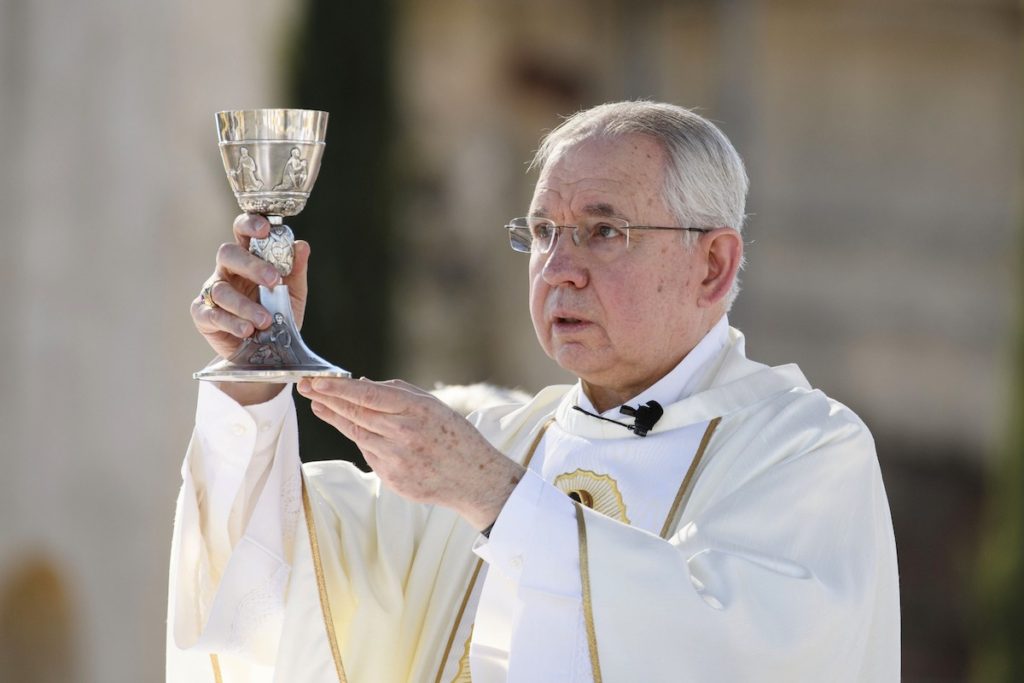 In its criticism of Gomez, Faith in Public Life — which Donohue characterized as “a front group for left-wing zealots seeking to create havoc in the Church” — called for Archbishop Gomez to apologize for “criticizing social justice movements.”

Particularly galling was the archbishop’s description of new social justice movements as “dangerous” as well as his denunciation of “wokeness” and “identity politics,” Faith in Public Life said.

In its petition against the archbishop, the group suggested that the Hispanic archbishop is not sufficiently anti-racist.

“Archbishop Gomez’s speech once again makes it clear why Black theologians must continue to proclaim boldly: ‘God is Black!’” said Craig Ford, a professor of theology at St. Norbert College.

Father Robert Sirico, a Catholic priest and founder of the Michigan-based Acton Institute, declared at the time that the leaked documents revealed Soros’ “crass political intention to manipulate church leaders.”

Faith in Public Life accepted Soros’ monies despite his self-proclaimed atheism, promotion of abortion on demand, and overt statism. The leaked documents explicitly declared that the donations formed part of Soros’ “long-term project of shifting the priorities of the U.S. Catholic church.”

A portion of the Soros gift in 2016 was spent promoting John Gehring, a former assistant media director at the U.S. Conference of Catholic Bishops, as a commentator to national media outlets.

The second group behind the petition denouncing Archbishop Gomez, Faithful America, “is run by a rogue Episcopalian priest who sticks his nose into the Church’s affairs,” Donohue said in Monday’s essay. 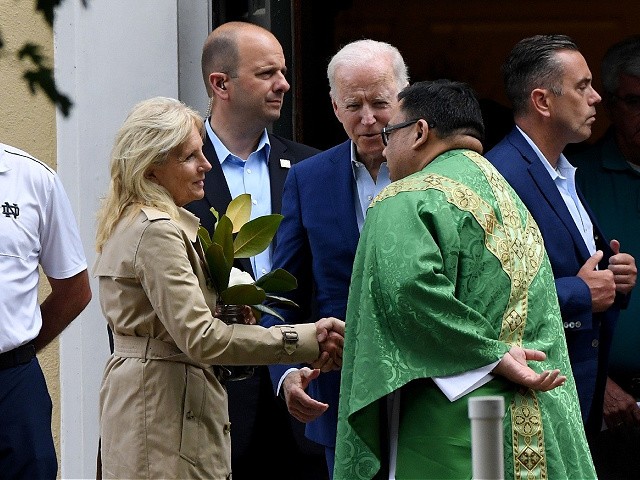 US President Joe Biden (C) and First Lady Jill Biden (L) speaks with a priest as they leave St. Joseph on the Brandywine Catholic Church in Wilmington, Delaware, June 19, 2021. US Roman Catholic bishops issued a challenge on June 18 to President Biden over his support for abortion rights, agreeing to draft a statement on the meaning of holy communion which could potentially be used to deny the sacred rite to the US leader. (Photo by OLIVIER DOULIERY/AFP via Getty Images)

Earlier this year, Faith in Public Life and Faithful America teamed up to demand the removal of Archbishop Joseph Naumann of Kansas City, Kansas, as chair of the U.S. bishops’ pro-life committee after Naumann said President Joe Biden should stop professing to be a “devout” Catholic.

Both groups have repeatedly downplayed the moral evil of abortion while advocating for LGBT issues and the Democratic Party.

“Anyone is free to disagree with Gomez’s address, but there is something unseemly about left-wing organizations launching a petition drive against him,” Donohue states in his essay. “Gomez, who is president of the United States Conference of Catholic Bishops, should be commended, not condemned, for his courage to speak the truth.”