ROME — The Vatican has issued a public statement thanking China for its solidarity with the Holy See shown in donations of medical supplies to combat the spread of the coronavirus.

“In recent days, donations of medical supplies have arrived from China to the Vatican Pharmacy,” reads a statement Thursday from Matteo Bruni, papal spokesman and director of the Holy See Press Office, “in particular through the organizations of the Red Cross Society of China and the Hebei Jinde Charities Foundation, as an expression of the solidarity of the Chinese people and Catholic communities with those involved in the relief of those affected by Covid-19 and the prevention of the current coronavirus epidemic.”

“The Holy See appreciates this generous gesture and expresses its gratitude to the bishops, the Catholic faithful, the institutions and all other Chinese citizens for this humanitarian initiative, assuring them of the esteem and prayers of the Holy Father,” the communiqué concludes.

In recent years, the Vatican has adopted a conciliatory approach in dealing with China’s communist regime (CCP) in the hope of reopening diplomatic relations.

In September 2018, the Vatican signed a secret agreement with the CCP regarding the appointment of bishops in China and later told Catholic clergy that they are free to join the state-run Chinese Catholic Patriotic Association, which is independent of Rome.

For his part, Pope Francis has insisted that the communist government protects religious freedom in China and that “churches are full.” Meanwhile, the chancellor of the Pontifical Academy of Social Sciences, the Argentinian Bishop Marcelo Sanchez Sorondo, has proclaimed that the CCP has created the best model for living out Catholic social teaching today.

The pope has refused to criticize the intense crackdown on religious freedom by the government of Xi Jinping and has kept silent concerning the repression of student pro-democracy protests in Hong Kong.

According to recent reports, the CCP has been using the Wuhan coronavirus epidemic as an excuse to intensify its clampdown on religion, bulldozing some Christian churches and placing others under heavy surveillance. 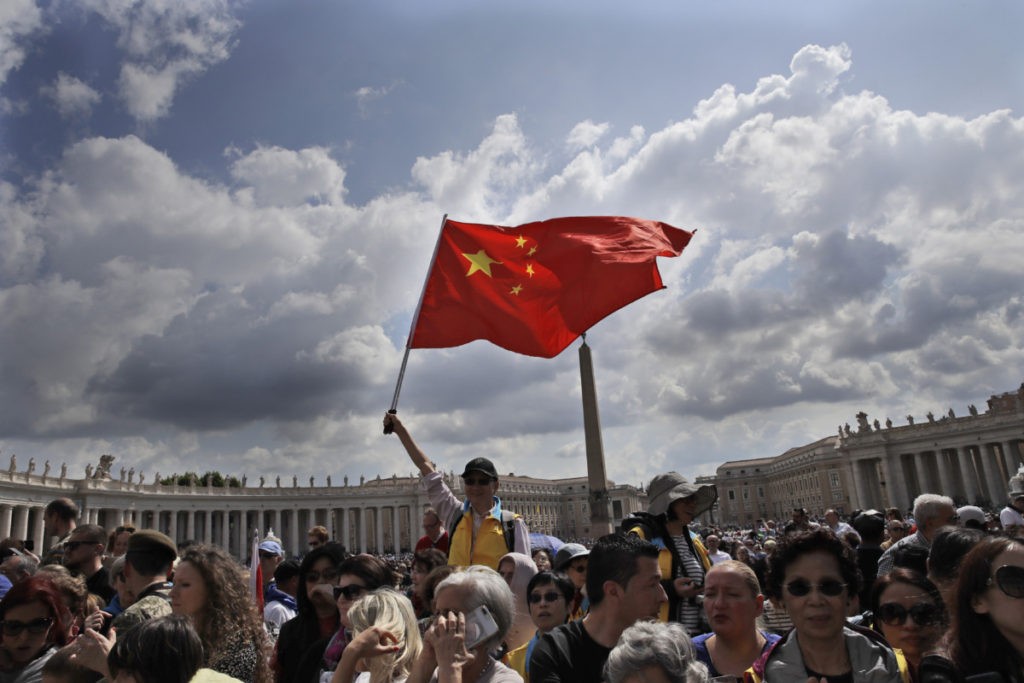 A Chinese faithful waves a flag as he attends Pope Francis weekly general audience in St. Peter’s square at the Vatican, Wednesday, May 22, 2019. (AP Photo/Alessandra Tarantino)

“China is now holding itself up as a model for fighting the coronavirus. But fighting the pandemic hasn’t stopped communist officials from persecuting Christians,” said Todd Nettleton, a spokesman for the nonprofit group Voice of the Martyrs (VOM), in late March.

Chinese authorities have reportedly vandalized other churches and ordered a ban on “unregistered” religious services on the grounds of public health.

The CCP’s coronavirus control group in Nenjiang issued an order on February 20 forbidding individuals and organizations from providing venues for “illegal religious activities,” allegedly to curb the spread of the epidemic.

The coronavirus pandemic has provided a convenient justification for the CCP to continue what it was already doing: persecuting house churches as “unstable elements” that undermine the regime.

In stark contrast to the Vatican’s appeasement policy, the president of the Federation of Asian Bishops’ Conferences said last week that the Chinese Communist Party has “primary responsibility” for the global coronavirus pandemic and owes the world “compensation for the destruction it has caused.”

There is “one government that has primary responsibility for what it has done and what it has failed to do, and that is the CCP regime in Beijing,” wrote Cardinal Charles Maung Bo, the archbishop of Yangon in Myanmar, which borders China.

“Let me be clear — it is the CCP that has been responsible, not the people of China, and no one should respond to this crisis with racial hatred toward the Chinese,” Cardinal Bo declared in a powerfully worded essay.

“But it is the repression, the lies and the corruption of the CCP that are responsible,” he says.

More and more voices are being raised against “the negligent attitude shown by China, especially its despotic Chinese Communist Party (CCP) led by its strongman Xi Jinping,” the cardinal wrote, citing law professor James Kraska that “China is legally responsible for Covid-19 and claims could be made in the trillions of dollars.”