Bolivia held its first presidential debate on Saturday in 18 years following the end of socialist rule and early returns revealed dismay among some in the country that the candidates did not sufficiently confront each other.

Former President Evo Morales, who chose to resign last year after 13 years in power and a report from the Organization of American States (OAS) finding evidence of fraud in his alleged 2019 reelection, refused to participate in any debate with opponents after his first election to head of state. In the aftermath of his departure from the country — now claiming himself the victim of a “coup” despite choosing to leave — interim President Jeanine Áñez organized a national election for October 18.

Mesa and Quiroga have both served as president in the past.

“In a televised debate focused on the country’s economic future, the seven presidential candidates largely stuck to laying out their policy platforms, with few clashes or exchanges between the runner, despite a background of political tensions,” Reuters noted.

The news network quoted an unnamed Bolivian analyst lamenting, “We are not used to debating. A debate must have a confrontation on a specific issue … It ended in a boring way with each of the candidates just repeating their script.”

The Bolivian newspaper La Razón similarly found disappointed Twitter users objecting that the moderators did not offer opportunities for the candidates to contrast with each other, or explain how they would be different from their peers.

“A group interview is not a debate,” one Twitter user lamented.

“This isn’t a debate, it’s a fashion show,” another joked.

The Argentine state news agency TelAm reported that the first round of debating featured “no surprises.”

The Bolivian newspaper Página Siete reported last week, following a spirited debate in the United States featuring President Donald Trump and his rival, Democrat Party candidate Joe Biden, that Bolivian authorities had put several mechanisms in place to prevent “insults” and heated disagreement, at least in the second debate on Sunday. Among them, the newspaper noted, was a pledge all candidates were required to sign to behave civilly. In the event that the pledge failed, producers had the power to cut off microphones if they found any candidate to be violating the terms of the debate.

La Razón reported few highlights during the first debate. Camacho outraged viewers in a statement on improving employment insisting that “women can tend to the house and work,” as opposed to men. Mamani garnered applause for a joke: “I am Mamani, but I am not mamón [a sucker].”

Chung, a social conservative, reportedly promised to turn the city of Uyuni into a resort like Las Vegas “without the promiscuity,” prompting “what happens in Uyuni, stays in Uyuni” jokes. Viewers also reportedly laughed at several technical difficulties that interrupted the broadcast.

The second debate, hosted on Sunday, featured two fewer candidates — Arce and Camacho withdrew — but more excitement. In a heated exchange, Chung accused Mesa of supporting abortion up until the birth of the child, a claim Mesa alleged was totally fabricated.

“I dont know what dream or what nightmare Mr. Chung is in,” Mesa responded. “I have never talked about the issue, I don’t know where he got what he just said. I would respond to it if it made sense, if I had ever defended what he just mentioned.”

Entering the debates, Arce of the MAS party was the clear frontrunner. A poll released Sunday found that Arce remained the most popular — 30 percent of respondents said they would vote for him — but Mesa at 24 percent was now a threat. According to Bolivian law, if no candidate attracts 40 percent of the vote, the top two vote-getters go to a second round of voting.

Áñez, the incumbent — a conservative senator who became president only after several people above her in the chain of command fled the country with Morales — bowed out of the presidential race last month, hoping to prevent splitting the vote and granting Arce a victory.

“If we do not unite, Morales returns. If we don’t unite, democracy loses. If we do not unite, dictatorship wins,” Áñez said in a video message announcing her withdrawall. “In sum, I step aside today in homage to freedom and democracy. What is at play in this election is no small thing. Democracy in Bolivia is at play. We have to set aside differences between those of us Bolivians who love democracy and we need to construct shoulder to shoulder, with courage and unity, the freedom that Bolivia and our children need.”

Her absence from the debate also prompted jokes online: 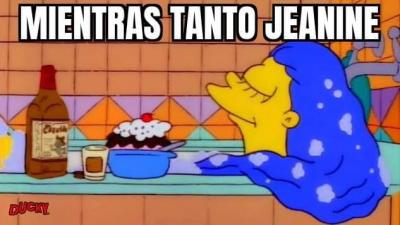