A massive fire at a government food storage center in Rio de Janeiro on Monday attracted a roving mob attempting to loot the supplies before they burned, prompting police to shoot bullets into the air to disperse the crowd.

Dramatic images of waves of shirtless men running towards the fire and exiting with their hands full of supplies made their way around the world on Monday, adding to the climate of unrest in the country forming the day after the closest presidential election in decades. On Sunday, Brazilians narrowly elected socialist former President Luiz Inácio Lula da Silva over incumbent conservative Jair Bolsonaro to be the next president. Protests have erupted nationwide, many of them led by truckers blocking major highways, in opposition to Lula, arguing that his status as a convicted felon should have legally barred him from running for the nation’s highest office.

The Supreme Federal Tribunal (STF), Brazil’s supreme court, overturned Lula’s conviction on corruption charges last year on a technicality, not challenging any of the evidence that he committed a crime.

Uncorroborated video alleging to be from the scene of the Rio de Janeiro riot shows some of the rioters making L-shaped hand gestures, typically associated with Lula supporters. Breitbart News could not independently authenticate that those videos came from the site of the fire on Monday, though the background appears consistent with verified media footage of the location.

The building in question was identified as a storage facility known as a “Supply Center of Rio de Janeiro,” a government location. Four of the storage facilities burned in the fire, the Globo network’s G1 outlet reported on Monday. No injuries were reported, though employees there lamented the significant loss of food and beverages from both the fire and the looting.

G1 reported, citing officials at the scene, that the fire appeared to begin around 9 a.m. local time and required firefighters from 17 different stations to drive in, controlling – but not fully extinguishing – the fire by 4 p.m. The public news site EBC, citing a firefighter spokesman, said that authorities also deployed drones and a helicopter overhead to quell the flames.

“It was all very fast,” Angela Bastos, a worker at the facility, told G1. “When they started yelling ‘fire,’ everyone ran. There was enough time for everyone to leave, but the material loss is probably total.”

Authorities have not yet revealed a concrete cause of the fire, but have announced an investigation into the incident.

“At the moment, it is not possible” to know the cause, Major Fábio Contreiras of the firefighter corps told EBC. “Later, we will solicit an investigation to figure out the circumstances. Now is the time to try to extinguish the fire as soon as possible and return the local businesses to normalcy.”

In the meantime, a crowd of rioters stormed the premises and surrounding businesses.

According to the Brazilian news outlet UOL, police arrived at the scene and shot bullets into the air to disperse the mob. Authorities have not reported any injuries relating to the riots despite the dramatic images.

While no reports have linked the riot to mounting tensions surrounding Sunday’s presidential election, the magazine Oeste reproduced a social media video showing men apparently participating in the riot throwing up hand signs associated with the Lula da Silva campaign – in particular, making an L-shape with their hands.

The men appear before a much larger mob of mostly shirtless men shouting and making hand gestures in front of a massive fire that appears consistent with the Rio de Janeiro incident. Oeste did not independently confirm the authenticity of the video or where it was filmed, however. 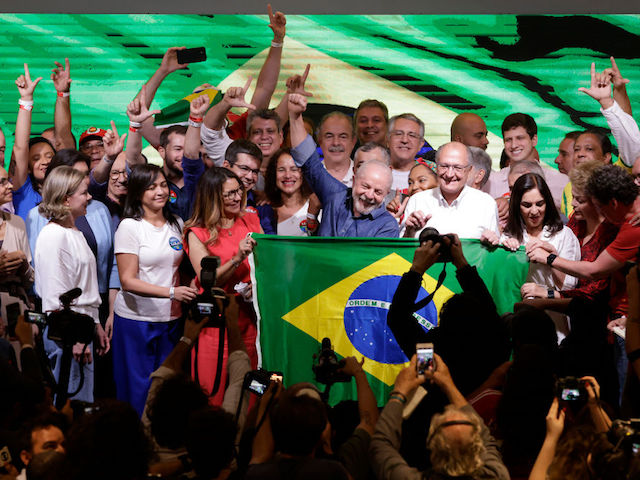 Jair Bolsonaro served Rio de Janeiro as a Congressman for 27 years, from 1991 until his election to the presidency in 2018. He won the state, however, by a narrow margin on Sunday, receiving 56.5 percent of the vote to Lula’s 43.5 percent statewide. In the city of Rio de Janeiro, Bolsonaro won 53 percent to 47 percent for Lula. Bolsonaro overperformed compared to polls in much of the country but failed to turn out the conservative vote in the major cities, particularly Rio de Janeiro and Sao Paulo. In Brazil, the rural areas tend to be progressive strongholds, while Bolsonaro and his conservative allies tend to receive more support in the cities. Sao Paulo, for example, elected the Bolsonaro-endorsed Tarcísio de Freitas as its governor on Sunday.

Bolsonaro’s defeat has prompted hundreds of protests nationwide by conservatives who reject Lula’s eligibility to be on the ballot at all given the corrupt acts he was convicted of that allegedly occurred during his presidency. While largely peaceful, the protests have consisted of truckers using their vehicles and tire fires to create roadblocks on major highways, angering locals and generating concerns regarding supply chain disruptions and potential grocery shortages. The protests continued into Wednesday even after Bolsonaro finally made a public statement on Tuesday.

“The current popular movements are the fruit of indignation and a feeling of injustice about how the electoral process went about,” Bolsonaro said. “Peaceful protests will always be welcome, but our methods cannot be those of the left.”

The president explicitly rejected protests that hurt “the right to come and go,” an apparent reference to the truckers.