The Local reports: Switzerland signed off on a secret deal with the Palestinian Liberation Organization (PLO) in 1970 in a bid to prevent terrorist attacks on its soil, a new book suggests.

The deal forged by the then Foreign Minister Pierre Graber saw the Alpine country providing diplomatic support to the Palestinian Liberation Organization. In exchange, Switzerland would be spared from terror attacks, according to research carried out by Marcel Gyr, a journalist with Swiss national daily the Neue Zürcher Zeitung. 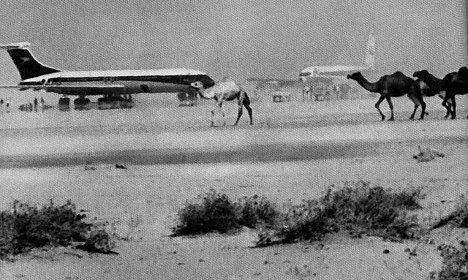 Aircraft on the ground during the Dawson’s Field hijackings in 1970.

The deal – allegedly so secret that the other members of Switzerland’s seven-member government did not even know about it – came at a time of high tension and in the context of several terror attacks.

In February 1970, a Swissair plane crashed just after taking off from Zurich’s Kloten airport, killing all 47 passengers, with Palestinian terrorists believed to be behind the attack, although no official link was ever established.

Later that year, Palestinian commandos hijacked a Swissair plane bound for New York and diverted it to Jordan, with 157 passengers held for a week.

But Switzerland’s decision to go it alone in dealing with the PLO put in on a potential collision course with foreign powers including the US and the UK as the country was officially part of a united front against Palestinian terrorism, Gyr argues in his book.

Read more at the Local