JERUSALEM — A Palestinian terrorist broke into a Jewish family home on Friday and murdered three Israelis in a brutal stabbing attack while the family was eating Shabbat dinner.

***Warning, this article contains a disturbing image of the crime scene below.***

The attack took place in the West Bank Israeli settlement of Halamish, located to the north of Ramallah. A man, reportedly aged 70, and two of his children, said to be in their thirties, were murdered, while the man’s wife, reportedly aged 68, was seriously wounded. The man’s other children and his grandchildren were in the house during the dining room attack, and reportedly hid in a nearby room.

According to a preliminary investigation, the terrorist, a Palestinian in his late teens from a nearby village, arrived in the settlement on foot armed with a knife, climbed a fence and chose the last house on a street near it.

The perpetrator broke a window and entered the home, surprising a family of about 10 inside as they were finishing their dinner and launching his stabbing spree.

During the attack, another daughter hid several of the grandchildren in one of the rooms, where she called police and began shouting that a terrorist was inside the home.

The terrorist was reportedly shot by an off-duty Israel Defense Forces (IDF) soldier who heard the family’s screams from a neighboring house. 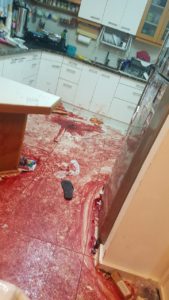 The perpetrator was identified by Palestinian media as 20-year-old Omar al Abed, from the West Bank village of Khobar, near Ramallah.

A post on Abed’s Facebook page says that he was motivated to act in response to the ongoing situation regarding the Temple Mount.

The posted stated, “I have many dreams and I believe they will come true, I love life and I love to make others happy, but what is my life is when they (Israel) murder women and children and defile our al-Aqsa.”

Also on Friday, three Palestinians were reported killed and over 200 were wounded in clashes with Israeli security forces in Jerusalem and the West Bank as Palestinian leaders urged a day of protest purportedly against Israel’s decision to put metal detectors at entrances to the Temple Mount.

Protest leaders, including top Palestinian officials, claim the metal detectors are part of an Israeli conspiracy to hamper Muslim worship at the Mount, the holiest site in Judaism and a site considered holy in Islam.

The activists and Palestinian officials seemingly fail to note that Israel’s new security measures were put into place in direct response to the murderous Palestinian terrorist attack at the Mount last Friday in which three assailants somehow smuggled weapons onto the site.  The metal detectors will protect all visitors to the Mount, including Muslim worshipers.

The activists protesting at the Temple Mount ignore that metal detectors have been in place for years for Jewish and Christian worshipers accessing the Western Wall. And Muslims on the Hajj pilgrimage pass through metal detectors at airports and border crossings.

The Palestinian charge that Israel is hampering Muslim access to the Temple Mount is contradicted by facts on the ground. Israel allows the Jordanian-controlled Waqf to serve as custodians of the Mount and grants Muslim worshipers access to the site 24 hours per day, seven days a week with the exception of rare instances of security threats.

Jewish and Christian visitors, however, are restricted by the Waqf from visiting the Mount except on small tours for about two hours per day. The Waqf does not allow non-Muslims to pray on the Mount or bring holy objects to the site; whereas Muslim prayer is unrestricted. Waqf representatives closely monitor non-Muslim visitors to the site and are known to boot those engaging in prayer.