Turkish President Recep Tayyip Erdoğan condemned Europe’s treatment of Turks yesterday as he used a fiery speech to urge the continent’s Muslims to stand up and fight for their rights in “failing democracies.”

His call at a massed rally in Sarajevo, Bosnia was met by ringing cries of “Allahu akbar ” and “Sultan Erdogan” from thousands of expatriate Turks, the Times reports.

“The European countries that claim to be the cradles of democracy have failed,” he told 15,000 cheering members of the Turkish diaspora, many of whom had travelled from Germany, Austria and the Netherlands.

“European Turks must show their strength to the whole world,” he said. “You need to be in those parliaments instead of the ones who betray our country.

“Are you ready to demonstrate to the whole world the strength of European Turks? Are you ready to give the terrorist organisations and their local and foreign henchmen an Ottoman slap?” — a reference to opposition PKK Kurdish groups who have front groups in some European capitals.

An estimated 15,000 people attended the rally in the Sarajevo’s Zetra sports center, where large portraits of Erdogan and Turkey’s first president, Mustafa Kemal Ataturk, were put up a day earlier. It was designed to drum up support for Mr. Erdogan before next month’s Turkish national elections.

The expatriate European vote is generally a source of support for Erdogan’s AKP and officials are keen to rouse a strong turnout in Europe.

The Bosnian capital was chosen for the event — ahead of Ankara’s presidential and parliamentary elections next month — after European Union states such as Germany, Austria and the Netherlands barred Turkish politicians from electioneering in their countries, stoking tensions between Ankara and Brussels. 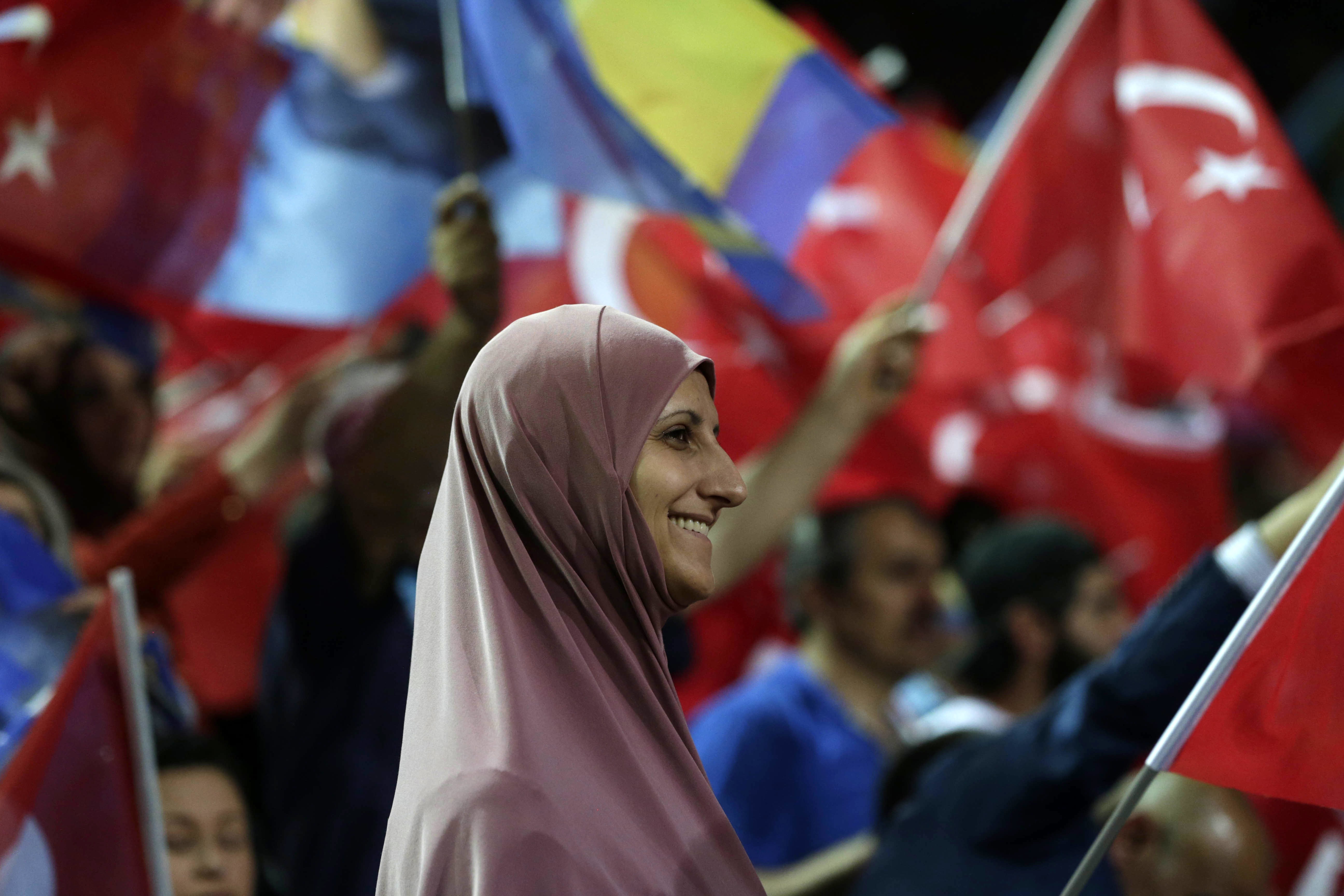 A woman attends a rally with others waving Turkish and Bosnian flags, in Sarajevo, Bosnia, on Sunday, May 20, 2018. Turkey’s president Recep Tayyip Erdogan arrived in the Bosnian capital to address supporters living in Europe, ahead of snap elections in his country.  (AP Photo/Amel Emric)

During his speech, Mr. Erdogan pledged to work to provide job opportunities for Turkish citizens who retire abroad, as well as new programs for children to learn Turkish.

He also took the opportunity to criticise Germany and other countries that have banned him from holding rallies on their soil. He said also that TRT, Turkey’s state news agency, would expand its coverage in Europe to counter the “propaganda” published against Muslims, and promised that Turks who took citizenship in other countries would not lose their right to vote in Turkey.

Turkey’s nationwide election on June 24 will be the first to occur since the mass arrests of leaders of the Kurdish-friendly Peoples’ Democratic Party (HDP) in 2016 for allegedly supporting the terrorist Kurdistan Workers’ Party (PKK).