Doha (AFP) — When stray puppy Izzy was rescued from a stretch of wasteland in Qatar, she was so dehydrated she could barely stand and was close to death.

One of many abandoned and stray animals struggling to survive on the scorched streets of the wealthy Gulf state, she is set to be adopted by a German family, but most others are not so lucky.

Now, Izzy’s rescuers are warning there could be a spike in dumped pets in the emirate as an economic downturn driven by the novel coronavirus pandemic forces expatriate workers and their families to leave at short notice.

“We’re expecting a wave of emails and phone calls to say, ‘Help’. We’ve had a few of those already,” Paws animal shelter co-founder Alison Caldwell said. 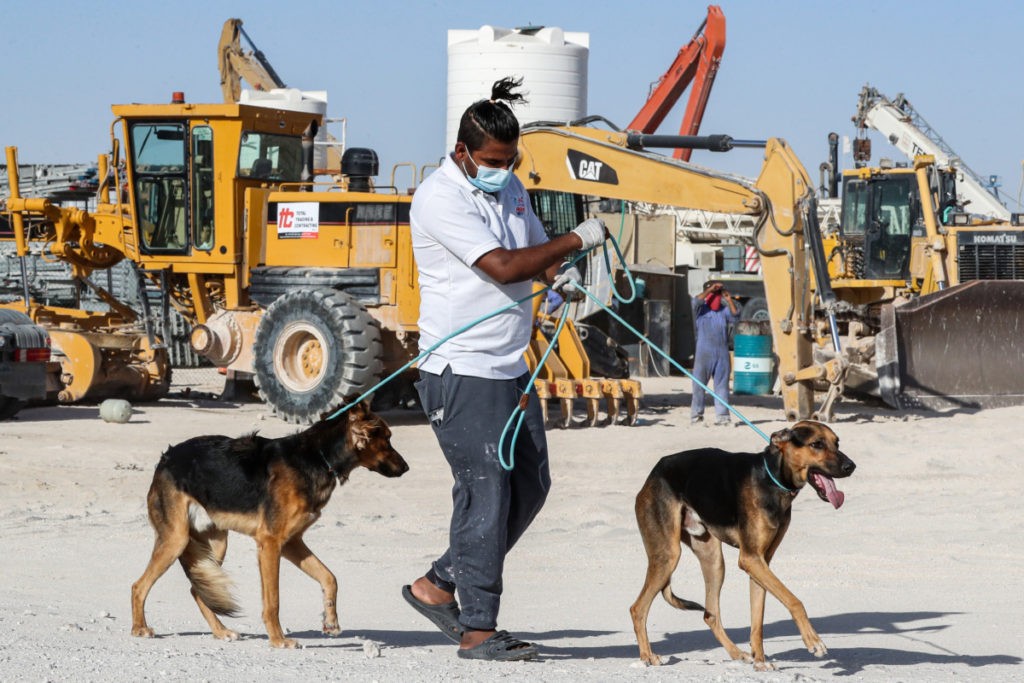 A mask-clad employee of the Paws animal welfare organisation walks rescued stray dogs outside the premises in the Mesaieed industrial area, about 50 kilometres south of the Qatari capital, on June 14, 2020. (KARIM JAAFAR/AFP via Getty Images)

Major employers including Qatar Petroleum and Qatar Airways have warned of sweeping cuts to staff numbers as the global economy slows.

Animals dumped or born on the streets in Qatar face particular hardship.

Summer temperatures touch 50 degrees Celsius (122 Fahrenheit) and images of abuse, including animals being shot with airguns, are common on social media.

Caldwell said the Paws shelter had already seen an uptick in the number of animals needing help.

“There’s nothing we can do, really,” Caldwell said — the shelter has capacity for just 60 cats and 30 dogs.

There are no statistics on stray animals in Qatar, but Paws estimates they number in the tens of thousands.

The pandemic has also complicated Paws’ efforts to re-home animals.

Izzy, a cream-coloured “Doha mix” cross-breed common in Qatar, was rescued in February.

By April, a family in Germany had spotted her story on Paws’ Facebook site and decided to adopt her.

But commercial aviation had ground to a halt as authorities imposed restrictions to contain the spread of the novel coronavirus.

From her home near Bremen in northern Germany, Christina Fuehrer said she had been “just sitting there waiting” for flights to resume so she could complete Izzy’s adoption.

“We still have to find a flight,” she told AFP, but said mid-July was the soonest. 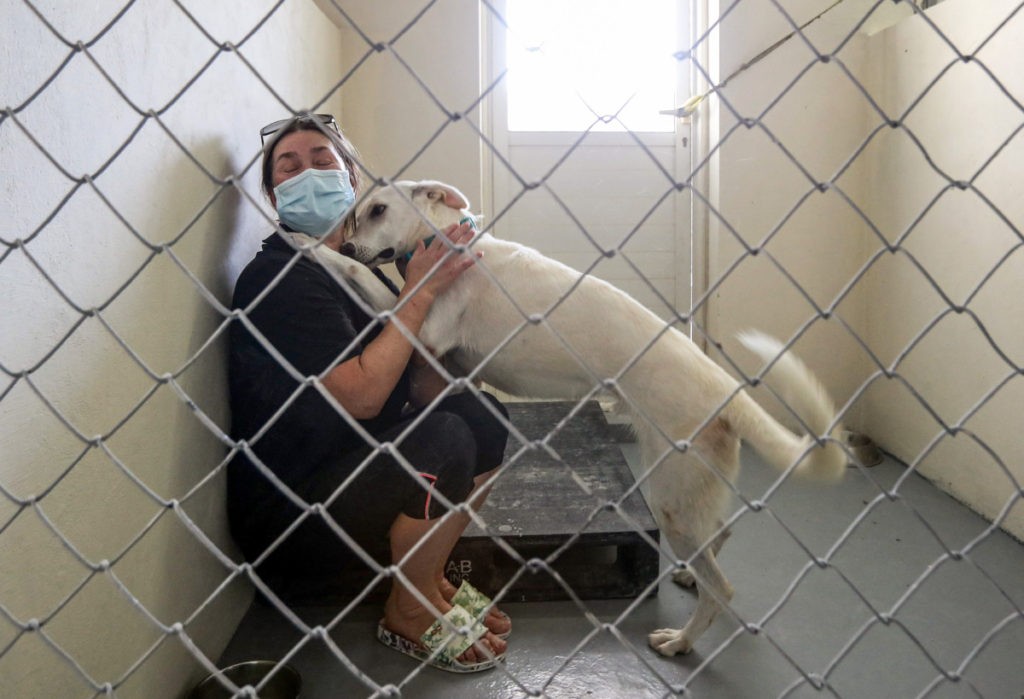 An animal trainer of the Paws animal welfare organisation handles a rescued stray dog inside a kennel at the premises in the Mesaieed industrial area, about 50 kilometres south of the Qatari capital. (KARIM JAAFAR/AFP via Getty Images)

Until then, Izzy is with a foster family who, like many others in Doha, found themselves eager for canine company to break the lockdown’s monotony.

“We decided it would be a good thing to do this summer, because we’re obviously not going anywhere,” said Julie Melville, who has taken the puppy in temporarily.

It costs just over $300, compared to $1,600 to send the pets via air freight — but for the system to work, passengers need to be able to travel freely and frequently.

Founded seven years ago by two British expats, Paws said it saw an influx of animals in the early days of the pandemic from owners who feared their pets could spread the virus.

People have also contacted the shelter for help after some animal owners fell ill and were hospitalised without warning.

Since March, more than 100 people have died and over three percent of Qatar’s population has been infected with the novel coronavirus, according to official figures.

Animal cruelty is also a major issue, said Paws co-manager Hester Drewry, due to Qatar’s transient population and a lack of education on the issue.

To raise awareness and deter those unable to care for an animal from acquiring pets, Paws partners with local schools and encourages children to volunteer with the rescue animals.

But Qatar’s lockdown has seen schools suspended and Paws unable to visit. 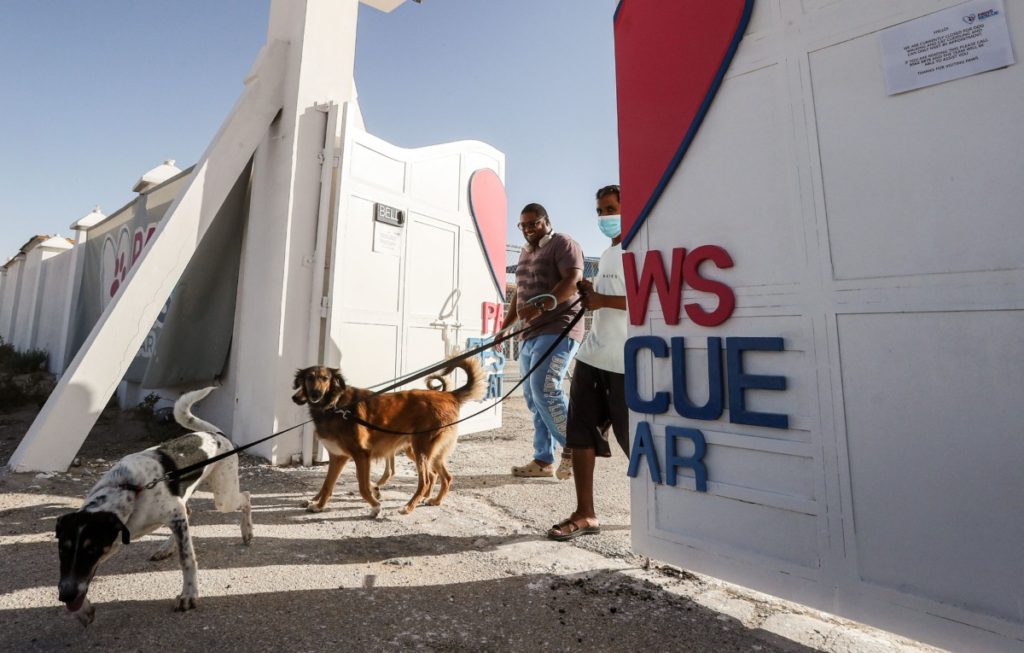 Employees of the Paws animal welfare organisation walk rescued stray dogs outside the premises in the Mesaieed industrial area, about 50 kilometres south of the Qatari capital. Animal rescuers now warn that there could be a spike in pets dumped in Qatar as the economic downturn, driven by the COVID-19 coronavirus pandemic, forces families to leave at short notice, facing particular hardship because summer temperatures touch 50 degrees celsius (122 Fahrenheit) and images of animal cruelty, including airgun shootings, are common on social media. ( KARIM JAAFAR/AFP via Getty Images)

The not-for-profit depends on donations and a mostly volunteer workforce, as well as revenue from its kennelling service.

The shelter team says their pens are “always full” as they battle to cope with an ever-increasing population of abandoned pets and strays, and volunteers often take home animals to help out.

“We have a huge backlog of animals waiting to fly out to their ‘forever homes’,” Drewry said.

Since opening, Paws has helped re-home 1,000 animals, many of them overseas, where Qatar’s ubiquitous Saluki hunting breed — with their distinctive narrow heads, prominent eyes and dangling ears — is highly coveted.