A wooden replica U.S. aircraft carrier attacked by Iran last month as part of a propaganda exercise appears to have capsized in the Strait of Hormuz, blocking a key shipping channel in the process.

Satellite imagery from Aurora Intel published in a Forbes report reveals the carrier listing at roughly 90 degrees with the starboard side facing upwards.

The capsized vessel was “listing steeply to one side, with nearly half of the flight deck submerged,” the report said.

The elaborate fake had been used as a target for missiles fired by the paramilitary Revolutionary Guard as well as the Iranian Navy which in turn attacked with small speed boats.

Soon after the exercise, the U.S. Navy taunted Iran’s ability to attack an unmanned, defenseless target ship by taking to Instagram and showing the bogus American aircraft carrier with a bullseye on it. 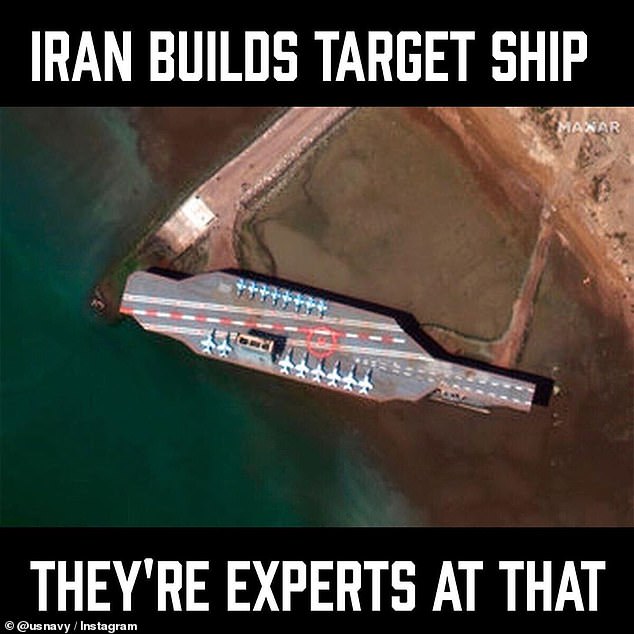 Now it appears the same replica vessel is located on the seabed near the harbor entrance to Bandar Abbas — a main approach channel in the Strait of Hormuz, Forbes said.

The report added the water there is only 45-feet deep, which will make it almost impossible for the ship to sink entirely.

It began to sink when it was being towed back to Bandar Abbas after being attacked. Sebastien Roblin wrote for Forbes on July 31 the vessel was “listing steeply to one side, with nearly half of the flight deck submerged.” Since then the situation has deteriorated.

As a result, Iranian forces will likely be tasked with recovering the carrier in order to prevent it from causing damage to other ships of the regime trying to sail through that area.

It is all a far cry from the confident attitude Iran was showing just a few weeks ago, as Breitbart News reported.

“What was shown today in these exercises, at the level of aerospace and naval forces, was all offensive,” Iran’s Revolutionary Guards commander Major General Hossein Salami told state television on the day the fake wooden carrier was attacked.