Vision (see above) also showed a helicopter firing a missile at the replica, complete with 16 fake fighter jets on board, while fast boats encircled the vessel as crews cried out with blood-curdling threats against the U.S. Navy and its sailors.

It was towed to the scene late Sunday and anchored in place and made ready to be the target for the sea, land and air assault. 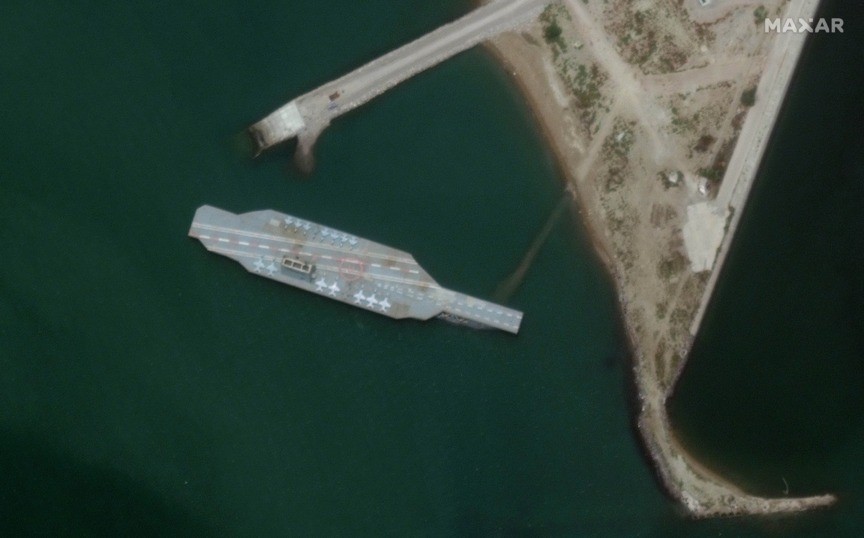 In this Sunday, June 7, 2020 satellite photo provided by Maxar Technologies, a fake aircraft carrier is seen off the coast of Bandar Abbas, Iran. The Islamic Republic appears to have constructed a new mockup of an aircraft carrier off its southern coast for potential live-fire drills. The faux foe, seen in satellite photographs obtained by The Associated Press, resembles a Nimitz-class carrier. (Satellite image ©2020 Maxar Technologies via AP)

The U.S. Navy’s Bahrain-based 5th Fleet did not comment.

However, on Monday a spokeswoman said the Navy remains “confident in our naval forces’ ability to defend themselves against any maritime threat” after satellite photos showed the fake carrier being readied for its role as a defenseless target.

“We cannot speak to what Iran hopes to gain by building this mockup, or what tactical value they would hope to gain by using such a mock-up in a training or exercise scenario,” Cmdr. Rebecca Rebarich told The Associated Press then. “We do not seek conflict, but remain ready to defend U.S. forces and interests from maritime threats in the region.”