Thomas Nides, the former State Department official who is reportedly President Joe Biden’s choice for U.S. Ambassador to Israel, shared anti-Trump conspiracy theories on Twitter, including the claim that Trump wanted to go to war with Iran.

WH likely to name ambassador to #Israel this week, reports @jacobkornbluh , and shortlist is down to two, @tomnides and @RobertWexler https://t.co/nglZLX5gmo

The Times of Israel noted Friday that Nides “is all but certain to be the Biden administration’s next ambassador to Israel,” after other contenders were eliminated. Biden has yet to nominate an ambassador to Israel, something President Donald Trump did soon after taking office. Nides is close to Secretary of State Tony Blinken and former President Barack Obama.

Nides has a history of supporting left-wing policies on the Israeli-Palestinian conflict, including attempting to stop Congress from defunding the anti-Israel United Nations Educational, Scientific and Cultural Organization (UNESCO), according to the Times of Israel, and trying to stop Congress from limiting funding to the UN Relief and Works Agency, viewed by critics as a pro-Palestinian institution, whose funding Trump eventually cut (and which the Biden administration is busy restoring).

He also retweeted former Obama advisor Ben Rhodes’s claim in 2019 that Trump was attempting to provoke Iran into a war. Rhodes was an architect of the Iran nuclear deal, and infamously boasted about feeding the media pro-deal propaganda.

Nides also retweeted a message by the Lincoln Project — later to be embroiled in scandal — speculating that Trump was hiding something in his medical records:

Nides also retweeted a false claim that Trump “wouldn’t honor” American World War I dead because it was raining:

Documents later proved that the Navy, not President Trump’s, had cancelled the trip because the weather was dangerous.

Originally from Minnesota, Nides has shuttled between Washington and Wall Street. He is currently the Managing Director and Vice Chairman of Morgan Stanley. Previously, he served as Deputy Secretary of State for Management and Resources under Hillary Clinton in the Obama administration. He testified before Congress at a Senate Foreign Relations Committee inquiry into the terror attack at Benghazi, Libya, noting that the department would improve spending on embassy security.

He is a fan of fellow Minnesotan Sen. Amy Klobuchar (D-MN), as his Twitter account reveals several pro-Klobuchar tweets. Nides also retweeted a column by Karen Tumulty at the Washington Post criticizing Biden for his habit of touching women. 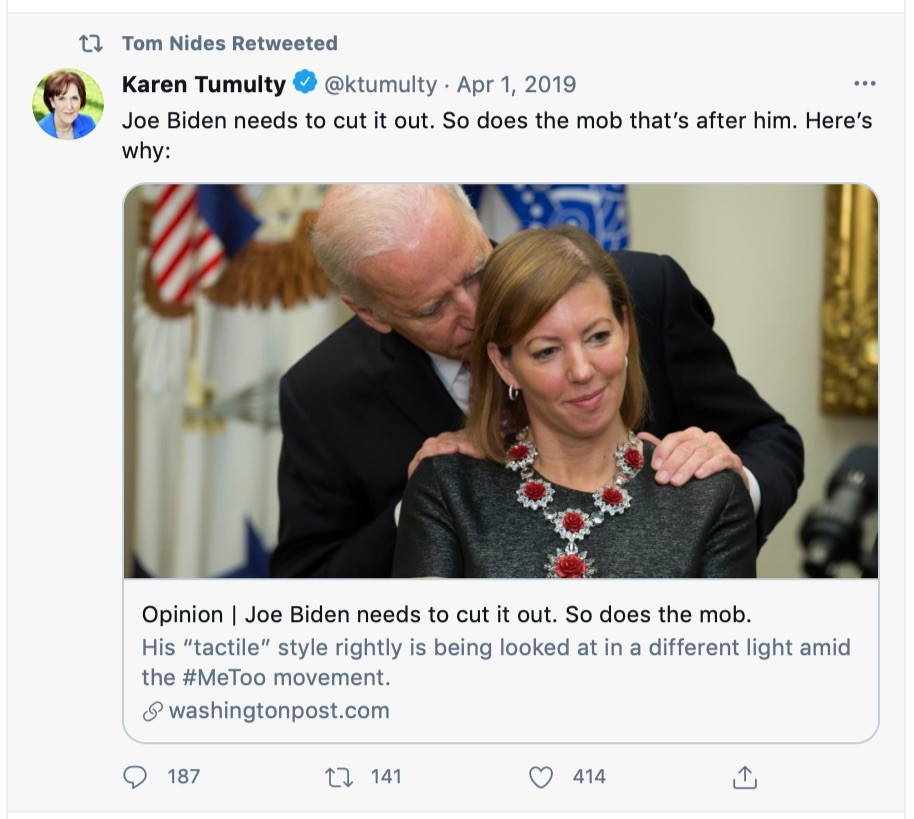 He was also the chief of staff for U.S. Trade Representative Mickey Kantor during the negotiation of the North American Free Trade Agreement (NAFTA), now regarded as a deeply flawed agreement that cost many American manufacturing jobs. NAFTA was replaced by President Trump, who negotiated the U.S.-Mexico-Canada Agreement (USMCA). Nides was also considered as a potential candidate to be the chief of staff in a Hillary Clinton administration.

To his critics, Nides embodies a political class whose members’ success is no longer just a mark of accomplishment but also a possible detriment—a sign of disconnect from the vast numbers of Americans who have fallen behind in an era of growing inequality. Activists have described Nides as “out of central casting for the Washington revolving door,” and it was assumed that when [Democratic Senator Elizabeth] Warren warned against appointees from Morgan Stanley she meant Nides.

Former Israeli ambassador to the U.S. told the Times of Israel that despite a somewhat critical portrayal of Nides in his book, Ally, which was critical of Obama administration policies toward Israel, he viewed Nides as a friend of the Jewish state.