Judiciary chief Ebrahim Raisi called himself as a “defender of human rights” when asked about his involvement in the 1988 mass execution of some 5,000 people, the official IRNA news agency reports.

Raisi made the comments in his first post-election press conference in Tehran.

He warned “the U.S. is obliged to lift all oppressive sanctions against Iran” while demanding a return to the 2015 Joint Comprehensive Plan of Action (JCPOA) nuclear agreement as delivered by former President Barack Obama.

President Donald Trump ended it in keeping with a campaign promise.

And we’re out. Another promise fulfilled ✔️

“When I make promises I keep them” @realDonaldTrump

The victory of Raisi, the protege of Iran’s supreme leader sanctioned by the U.S. in part over his involvement in the mass executions, came amid the lowest turnout in the Islamic Republic’s history, as Breitbart News reported.

Iranian Supreme Leader Ayatollah Ali Khamenei gave an address to the nation last Wednesday in which he pleaded with Iranians to vote in last weekend’s presidential election.

Khamenei fretted a low turnout would help the West challenge the legitimacy of the Iranian government, going as far as suggesting foreign powers were conspiring to depress the vote. 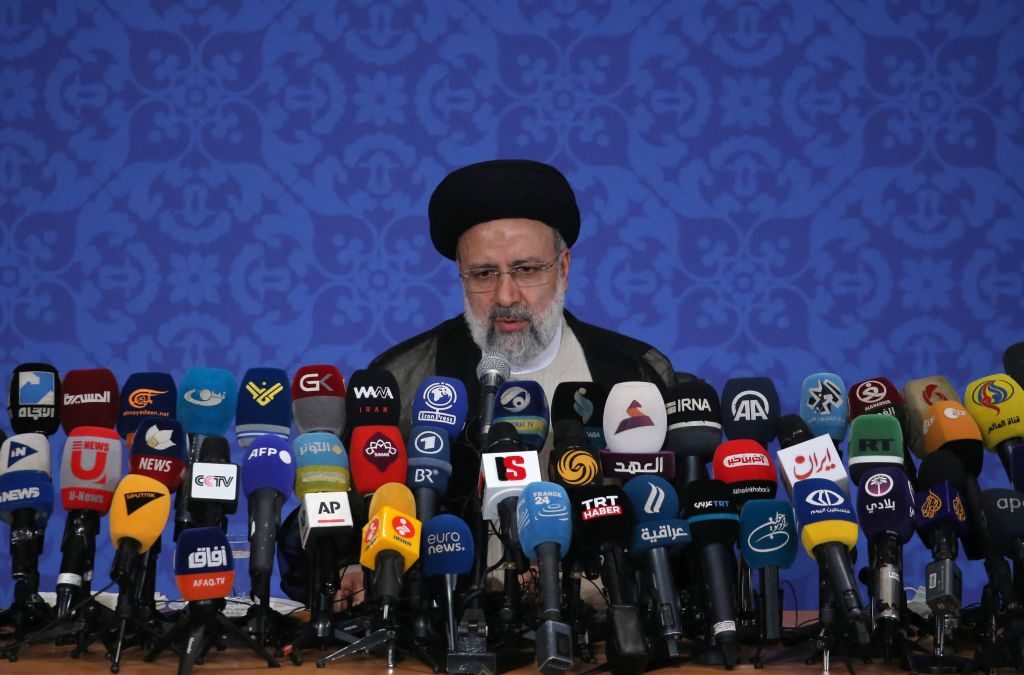 Iran’s President-elect Ebrahim Raisi addresses his first press conference in the capital Tehran, on June 21, 2021. The ultraconservative cleric was declared the winner of the election on the weekend, replacing moderate Hassan Rouhani. (ATTA KENARE/AFP via Getty Images)

Millions of Iranians stayed home in defiance of the call in a vote they saw as tipped in Raisi’s favor.

Raisi’s election puts hard-liners firmly in control across the government as negotiations in Vienna continue to try to save a tattered deal meant to limit Iran’s nuclear program, at a time when Tehran is enriching uranium at 60 percent its highest levels ever, though still short of weapons-grade levels.

Representatives of the world powers party to the deal returned to their capitals for consultations following the latest round of negotiations on Sunday.