An Israeli official on Tuesday said the bullet handed over by the Palestinian Authority to American officials for forensic testing may not have been the actual bullet that killed veteran Al Jazeera reporter Shireen Abu Akleh.

MK Ram Ben Barak (Yesh Atid), who chairs the Knesset’s Foreign Affairs and Defense Committee, said the fact that the ballistic analysis was deemed “inconclusive” by both Israeli and American forensics experts could mean the bullet that was transferred by the PA was the “wrong” one.

“If the results of the [tests] cannot determine from which weapon the bullet was fired and who it hit, then this could indicate that it’s simply the wrong bullet,” Ben Barak, who has not read the forensic report, told Army Radio.

The bullet recovered in the autopsy was a 5.56 mm round, an assault rifle caliber used by both the Israeli army and Palestinian terrorists.

The State Department released a statement that while the tests completed Monday were “inconclusive,” it was “likely” an Israeli soldier mistakenly fired the fatal shot.

“After an extremely detailed forensic analysis, independent, third-party examiners, as part of a process overseen by the US Security Coordinator (USSC) could not reach a definitive conclusion regarding the origin of the bullet that killed Palestinian-American journalist Shireen Abu Akleh,” the State Department statement read. 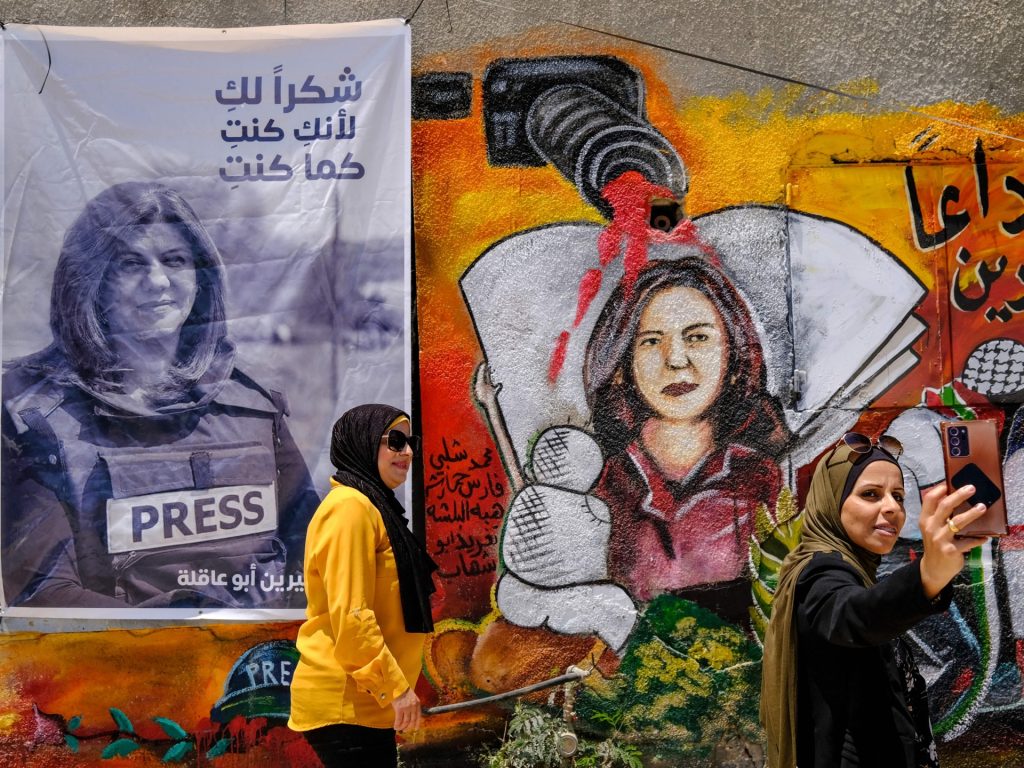 Palestinian women stand on May 19, 2022 in front of a mural, part of an exhibit honouring slain Al-Jazeera journalist Shireen Abu Akleh (portraits), at the spot where she was killed on May 11 while covering an Israeli army raid in Jenin in the West Bank. ( RONALDO SCHEMIDT/AFP via Getty)

“Ballistics determined that the bullet was badly damaged, which prevented a clear conclusion.”

Israel has maintained for weeks it had identified the IDF rifle that may have fired the shot, but it couldn’t confirm conclusively without the bullet.

Israeli experts conducted the analysis in a forensic laboratory in Israel in the presence of USSC representatives.

The IDF also said in a statement on Monday that the poor condition of the bullet did not allow “conclusive determination regarding the source of fire” that resulted in Abu Akleh’s death.

In a photo of the alleged bullet released by Al Jazeera, it is badly misshapen. According to Qatar-based outlet, the bullet ricocheted on the inside of Abu Akleh’s helmet.

“In addition to the forensic and ballistic analysis, the USSC was granted full access to both Israel Defense Forces (IDF) and Palestinian Authority (PA) investigations over the last several weeks,” said the State Department.

“By summarizing both investigations the USSC concluded that gunfire from IDF positions was likely responsible for the death of Shireen Abu Akleh. The USSC found no reason to believe that this was intentional but rather the result of tragic circumstances during an IDF-led military operation against factions of Palestinian Islamic Jihad.”