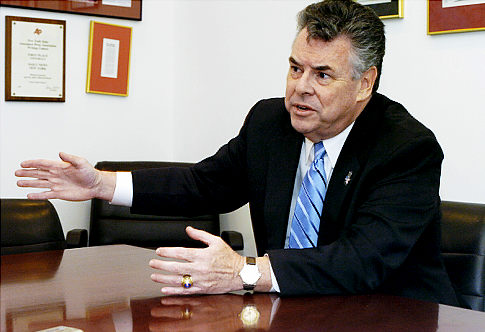 A previous blog of mine featured Allen West’s candid remarks about the living legacy of jihad during a forum in early 2010. Below are extracts from an interview West gave with Frank Gaffney, subsequently, after his election to Congress, this past November 2, 2010. These statements demonstrate that the Congressman-elect clearly understands the full ideological spectrum of the jihadist threat we face–non-violent as well as violent–rooted in the Sharia. West’s reality-based understanding far transcends that of many conservative see-no-Sharia voices.

Allen West’s appointment to the Armed Services Committee bodes well for an honest re-evaluation of our current delusional policies. West has indicated his desire, specifically, to review our self-destructive COIN-based rules of engagement–which ignore the jihadist enemy’s Sharia-based threat doctrine. Perhaps that conversation will now extend to the domestic threat as well, under the aegis of Congressman Peter King, who claims to want to examine the sources of “Muslim radicalization” in America. Hope springs eternal!

ALLEN WEST: So there are many different ways we need to understand this 21st century battlefield, how we can leverage all elements of our nation’s power against — and like I said we need to get away from this nation building focus. I think that is economically hurting us.

GAFFNEY: In terms of understanding our enemy, and I think you’ve done as much as any congressional candidate to help expand the awareness for not only your constituents but others. I count on you to be carrying that on in your new capacity. What is your sense of the willingness of this new Congress to take on Sharia as the enemy threat doctrine?

WEST: Well, I haven’t had the opportunity to sit down with all of the new members, giving all the new members of the freshmen class a phone call to talk to them. I think one of the critical things that we must come together is that there is an infiltration of the Sharia practice into all of our operating systems in our country as well as across Western civilization. So we must be willing to recognize that enemy. We cannot have a national security strategy that does not recognize it in specific and understand its goals and objectives. So once again, we can tailor you know our internal goals and objectives as far as our security systems, our political systems, economic systems, our cultural and educational systems, so that we can thwart this. And it comes back to one of those strategic goals that you mentioned, reducing the sphere of influence of this Sharia you know ideology that is tied into Islam. But I think that is our most threatening part, is the Sharia philosophy.