“Praise be to God, each day we conquer the American Jews like our conquests over the Jews of Israel. Your brother, Sofian”

One should know several things about “Brother Sofian”: his full name is Sofian Zakkout; he is a Palestinian “proudly born in Gaza“; he lives in Florida; and – despite the outrageous statement above and others like them, the organization he runs is funded by agencies of the U.S. government and has excellent relations with a range of Jewish organizations. 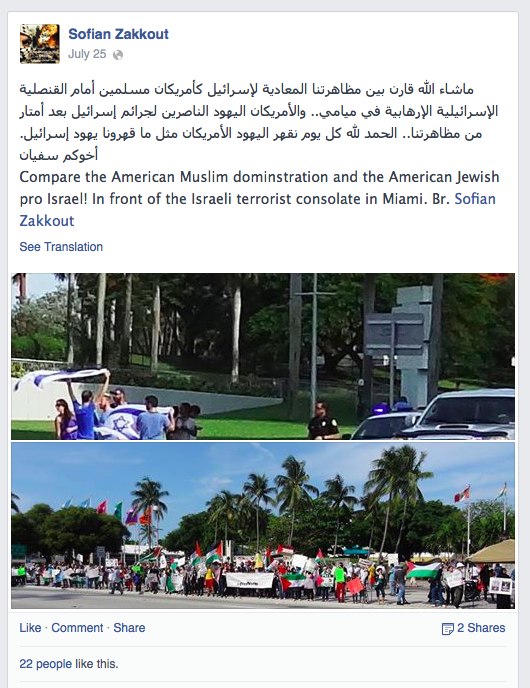 Screenshot of Sofian Zakkout’s Facebook post from July 25, 2014, where he writes only in Arabic: “Praise be to God, each day we conquer the American Jews like our conquests over the Jews of Israel.”

Zakkout served on the US Commission on Civil Rights-Florida State Advisory Committee in 2002-10. In 2005, the FBI attended an event organized by Zakkout’s non-profit, the American Muslim Association of North America (AMANA).  Jeff Green of the FBI’s Miami office explained there: “We just want to let the community know we’re part of the community like they are. We protect the rights they have. Events like this help us to promote a greater understanding of community and law enforcement.”

The Department of Homeland Security awarded $70,000 in 2007 to an organization Zakkout founded, American Muslims for Emergency Relief (AMER). The Miami-Dade County Corps Council awarded Zakkout for his “outstanding” service. Miami-Dade commissioners appointed him to the Community Relations Board and the Asian Advisory Board. Former Broward County Mayor Kristin Jacobs appointed him to the Broward County Diversity Advisory Council.  As of 2010, his bio informs us, he was an active board member at Miami Dade County Citizen Corps, Miami-Dade Crime Watch for Citizens, and Miami-Dade Crime Stoppers.

Zakkout boasted in 2011 that “The Justice Department and other government agencies have put my organization’s name on their list of organizations that they are going to work with.”

As for Jewish organizations: He took part in J Street South Florida’s 2012 Passover Seder. He is co-chair of the Jewish-Arab Dialogue Association (JADA). He spoke at Temple Israel in Miami.  He co-sponsored an “Interfaith Dialogue” at Temple Sinai in North Miami Beach.  At the same synagogue, a rabbi lauded Zakkout in a sermon, no less: “I know you work very hard to build understanding and respect between the Muslim and non-Muslim communities, so again, thank you.” 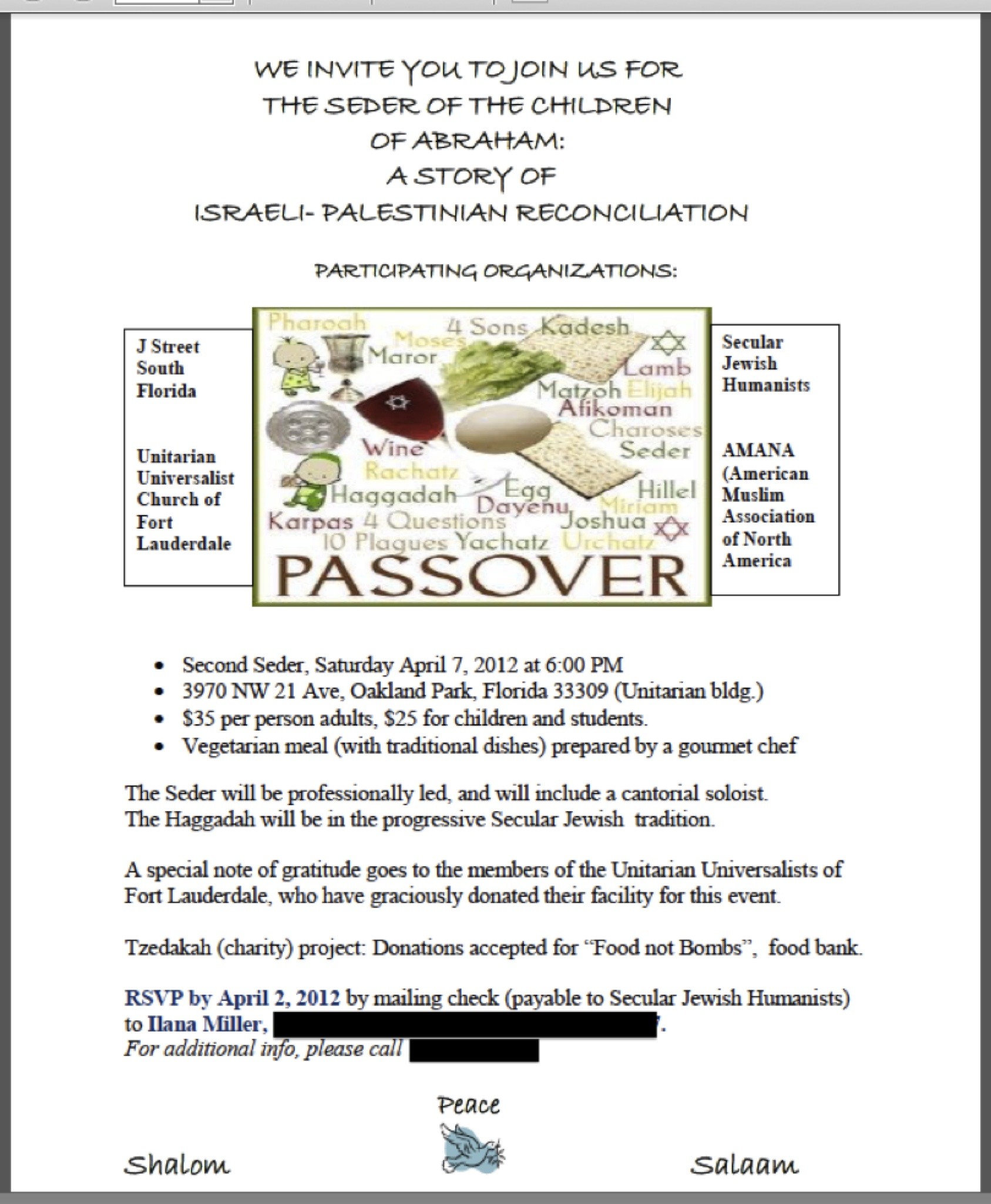 How can someone delusional about Israel and with such repulsive intentions toward American Jews have these prestigious affiliations and activities?  Simple: In part, by hiding his views from those who would object.  He posted his “conquer the American Jews” statement only in Arabic; in English, he limited himself to less incendiary statements.

In part too, Zakkout spouts politically-correct verbiage that masks his meaning. Witness these lines from AMANA’s website:

That last sentence stands in stark contrast to his statement that each day “we conquer the American Jews.”

Zakkout was also an organizer of the July 20 anti-Israel demonstration in Miami where the crowd yelled “We are Hamas,” “Hamas kicked your ass,” and “We are Jihad.”  In Arabic, the protestors also chanted “Khaybar, Khaybar, oh Jew, Muhammad’s army will return” a reference to a seventh-century massacre of the Jewish community of Khaybar.  Video of the protest below:

On August 10, one day after Rabbi Joseph Raksin was gunned down on his way to synagogue in Miami in what may be a religiously-motivated hate crime, Zakkout who is based in Miami, took again to his Facebook page where he penned a political diatribe that included America “was contaminated by the Jews.” 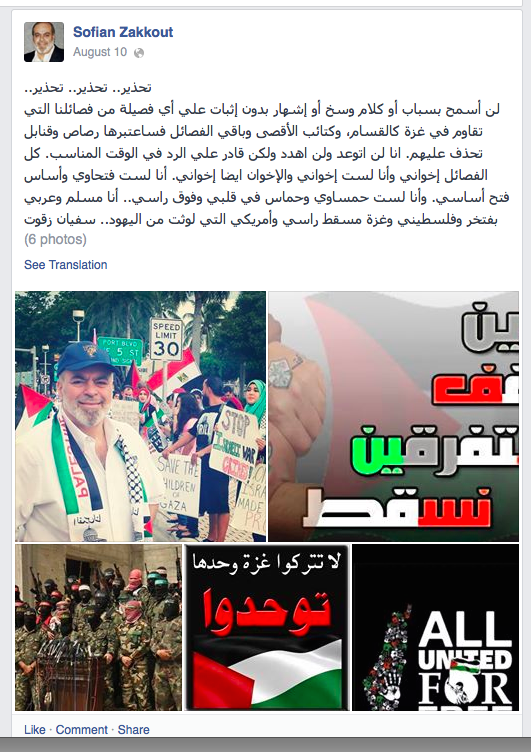 Screenshot of Sofian Zakkout’s Facebook post from August 10, 2014, included in Arabic is that America “was contaminated by the Jews.”  Among the images featured in the post are a terrorist press conference and a map that eliminates the Jewish State of Israel.

These are merely the most recent documented examples of Zakkout broadcasting his hostile beliefs.  Joe Kaufman of Americans Against Hate has warned for years about Zakkout’s views, documenting instances of anti-Christian, anti-gay, and anti-Jewish rhetoric on the AMANA website. More: the AMANA site used to link to the Al-Haramain Foundation, a Saudi “charity” that fundraised for Al-Qaeda. With such a history, it leaves one to wonder how many others like Zakkout hide behind terms like “understanding” and “interfaith dialogue” while harboring deeply un-American sentiments.

That Zakkout has simultaneously made outrageous anti-Semitic and other bigoted statements while also being embraced by the government and Jewish organizations is a disgrace that must be immediately rectified. The time has come for those organizations to repudiate him and denounce him.