Two Palestinian terrorists carried out what is believed to be a religiously motivated terror attack in a Jerusalem synagogue on Tuesday. The jihadist onslaught, where the two Palestinians were armed with guns and axes, resulted in the deaths of four and left an additional eight wounded.

CNN displayed heavy pro-Palestinian bias in its reporting on the terror attack in which four Jews were slaughtered, Omri Ceren of The Israel Project noted. One of CNN’s headlines inaccurately read, “Deadly Attack on Jerusalem Mosque,” while the other displayed, “Police Shot, Killed Two Palestinians.” 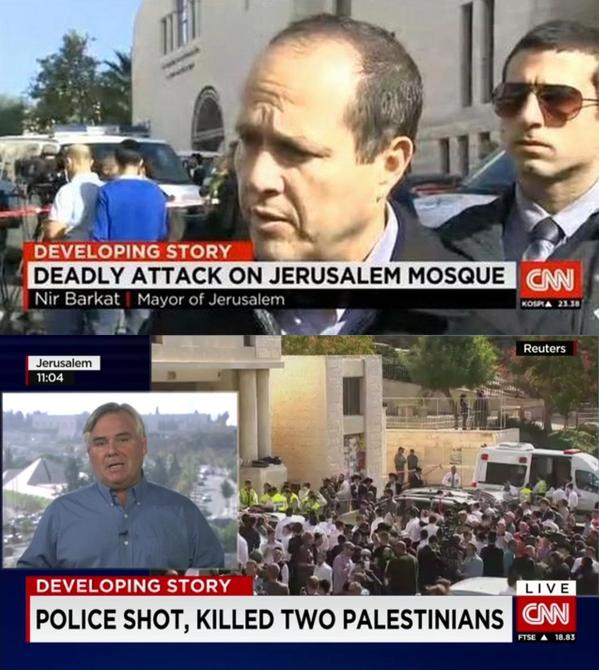 Police spokesman Micky Rosenfeld said that the four men were killed while they were praying quietly within a synagogue. Additionally, IDF Spokesman Peter Lerner released photos from the crime scene within the synagogue. The FBI is reportedly also investigating the jihadist attack.

“We will respond with a heavy hand to the brutal murder of Jews who came to pray and were met by reprehensible murderers. This is the direct incitement being led by Hamas & Abu Mazen (Palestinian President Mahmoud Abbas), incitement which the international community is irresponsibly ignoring.”

U.S. Secretary of State John Kerry described the jihadist attack as a “pure act of terror.” He said, “This morning, today, in Jerusalem, Palestinians attacked Jews who were praying in a synagogue.” He added, “People who had come to worship God in the sanctuary of a synagogue were hatched and hacked and murdered in that holy place in an act of pure terror and senseless brutality and murder.”