In George Orwell’s landmark novel 1984, Big Brother’s dictatorial state uses “newspeak” and its Ministry of Truth to turn falsehood into manufactured “truth” and reality into lies. The administration’s explanation of what drives the terrorists responsible for 9/11, the Fort Hood shooting, and the Boston bombing sounds everyday more and more like a product of The Ministry of Truth.

This weekend, the President gave an interview on CNN in which he made several categorical assertions about the terrorists that have endangered America and her allies and, most recently, beheaded a Japanese hostage in the Middle East. As Breitbart has reported, the Commander-in-Chief explicitly “rejected the notion” that the war on terrorism is any kind of “religious war” against radical Islam. President Obama went on to explain how groups such as Al Qaeda and The Islamic State are not in fact Islamic but simply nihilists.

This message is not new or unique to the chief executive, since in fact, back in 2011, the administration banned any mention of Islam or even “Jihad” in counterterrorism training for the Department of Justice – to include the FBI – and the Department of Defense, to include all our armed forces. Since that time, the official line has been that religion, and specifically Islam, has nothing to do with events such as the Boston Bombing or the rise of ISIS.

But what are the facts?

Al Qaeda, Boko Haram, the Al Nusra Front, and ISIS all share the same goal and ideology. They all want to reestablish the theocratic empire of Islam – The Caliphate – that was dissolved in 1924, and they all see Holy War, or Jihad, as the only way to do so. Where does this ideology come from? Just like America and the Western military world, the Global Jihadist Movement (GJM) has its grand strategic thinkers, their own Clausewitzs and Mackinders. The three most important are the Egyptian, Sayyid Qutb; the Palestinian Jordanian, Abdulah Azzam; and the Pakistani Brigadier S.K. Malik. What did these three founders of the GJM have to say about Islam’s relationship to terrorism?

In other words, the greatest minds behind the threat groups we face today, the authors that shaped the ideology behind the atrocities we witness day in and day out, are all in agreement: Islam has lost its way and Jihad must be used to cleanse the world of disbelief until the theocratic empire reigns supreme.

Whatever the President and his newspeak cadre believe, it is clear what Abu Bakr al Baghdadi, the head of ISIS/The Islamic State believes. Last September 11th, I was invited to brief an element of the US Intelligence Community that stills holds to the professional standard that one has to be honest about what the enemy says and what they are doing. In the brief, I took the speech Abu Bakr made earlier in the Summer of 2014 from the pulpit of the Grand Mosque in Mosul, in which he declared the reestablishment of the Caliphate, and represent it as a “word cloud,” the visual representation of a text in which words are given a larger size and put closer to the center of the diagram the more often they are used.

This is the result: 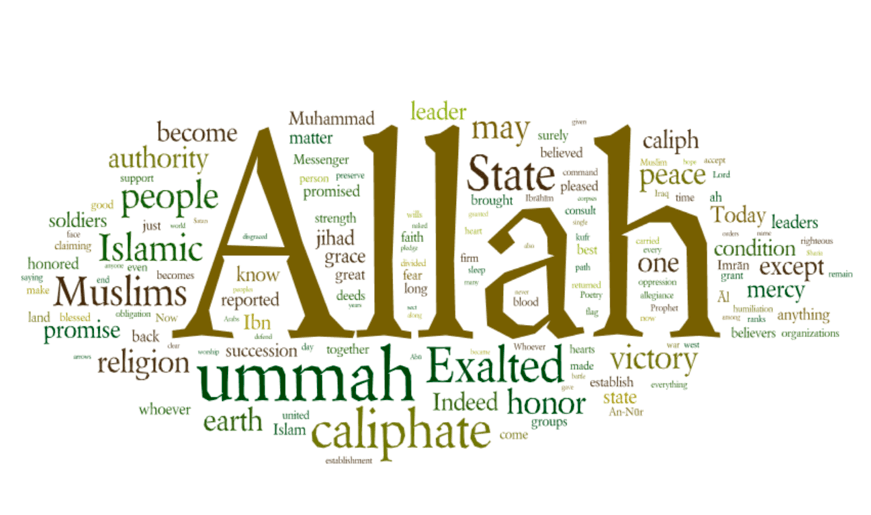 It is clear that our greatest current enemy has no question about why and what he is fighting for.

Sebastian Gorka PhD is the Matthew C. Horner Distinguished Chair of Military Theory at the Marine Corps University and also adjunct professor at the Institute of World Politics. You can follow on Twitter at: @SebGorka.