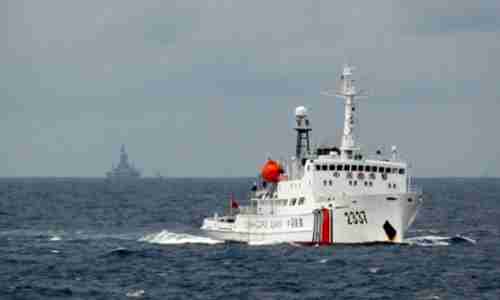 China is on a building spree, conducting “large scale” land reclamation and construction in the Spratly Islands in the South China Sea. Since last year, China has already built a new artificial island, more than 18 acres in size, whose main building appears to have an anti-aircraft tower.

Satellite photographs have shown that Chinese reclamation work is advanced on six reefs in the Spratly archipelago. Workers are building ports and fuel storage depots as well as possibly two airstrips as China works to project its military power into Southeast Asia. China’s creation of artificial islands in the South China Sea is happening so fast that Beijing will be able to extend the range of its navy, air force, coastguard and fishing fleets before long, according to analysts.

China continues to occupy regions in the South China Sea that have historically belonged to other countries, and continues a massive military presence to enforce its seizures. China has claimed the entire South China Sea, including regions historically belonging to Vietnam, Brunei, Malaysia, Indonesia, Taiwan and the Philippines. China’s claims are rejected by almost everyone outside of China, and China refuses to submit them to the United Nations court deciding such matters, apparently knowing that they would lose. Instead, China is becoming increasingly belligerent militarily, annexing other nations’ territories, and militarizing the entire sea.

Director of National Intelligence James Clapper said on Thursday at a Senate hearing that China is making an “aggressive” military effort to exert sovereignty in the South China Sea. However, he said that China was still in a construction phase so it was unclear what weaponry or forces it might deploy on these man-made islands. Guardian (London) and Reuters and Foreign Policy and Reuters (2/20)

China is building some “fairly amazing submarines” and now has more diesel- and nuclear-powered vessels than the United States, according to Vice Admiral Joseph Mulloy at a Senate hearing on Wednesday. “We know they are out experimenting and looking at operating and clearly want to be in this world of advanced submarines,” he said. Mulloy said the quality of China’s submarines was lower than those built by the United States, but the size of its undersea fleet had now surpassed that of the U.S. fleet.

China has been building numerous missile systems and other weaponry with no other purpose than to attack American cities, military bases, and aircraft carriers. Generational Dynamics predicts that China is preparing to launch a pre-emptive full-scale nuclear missile attack on the United States. In the generational crisis war to follow, there is no guarantee that the United States will survive. Reuters and Washington Times