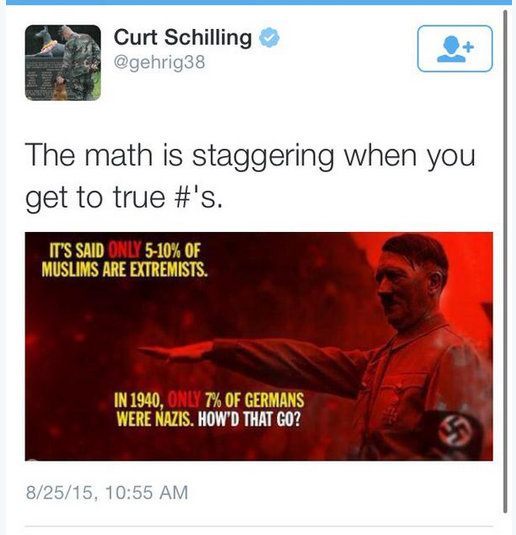 Schilling deleted the tweet after blowback. ESPN released a statement upon suspending Schilling:

Curt’s tweet was completely unacceptable, and in no way represents our company’s perspective. We made that point very strongly to Curt and have removed him from his current Little League assignment pending further consideration.

The tweet was offensive – to radical Muslims. Factually speaking, there were approximately 6.5 million formal members of the Nazi Party in 1940, out of a total German population of well over 80 million – a little over 8 percent. That number of members did not fully represent the level of support for the Nazi regime in Germany in 1940, of course.

The same is true in the radicalized Muslim community. A very small percentage of Muslims globally are formal members of terror groups; it is difficult to estimate precise numbers due to secrecy, although their total membership runs into the hundreds of thousands (the Iranian Revolutionary Guard alone has 120,000 members, and some estimates have placed the ISIS membership at above 200,00).

That terrorist membership is the tip of the iceberg: as I have written before, a huge percentage of worldwide Muslims are radicalized. If you calculate the number of Muslims globally who (1) believe that 9/11 was not committed by Muslims; (2) think that shariah law ought to be implemented; (3) support terrorist attacks; or (4) have a positive or neutral attitude toward ISIS, Hamas, Hezbollah, Osama Bin Laden or any other terrorist group or terrorist, the number calculates out to well above 800 million radicalized Muslims.

PolitiFact’s ridiculous attempts to counter these calculations – cherry-picking their own, far narrower standard of radicalization — led them to the awkward position that 19 percent of Muslims in various countries, including the West, are radicalized (some 182 million Muslims worldwide).

As Schilling wrote, the math is staggering when you get to true numbers.

But ESPN has no interest in true numbers, because true numbers are awkward. Unsurprisingly, ESPN refused to explain why Schilling’s tweet was unacceptable. Is it because radicalized Muslims are somehow better than Germans who weren’t formal Nazi Party members? Is it because the genocidal Iranian regime or the barbarians of ISIS are somehow less objectionable than the Nazis themselves?

It is worth noting that Schiling did not say that all Muslims should be tarred with the terrorist brush, any more than all Germans should have been tarred with the Nazi brush. The point of his tweet, to anyone with a functioning prefrontal cortex, is obvious: a small, brutal percentage of a larger, partially supportive population can do tremendous harm. That’s inarguable.

Fortunately, ESPN doesn’t have to argue with Schilling or anyone else. They simply suspended Schilling, without any real rationale (by way of comparison, they did not suspend frequent ESPN guest Kevin Blackistone for calling the “Star-Spangled Banner” a “war anthem” on their airwaves). And the compliant media breath a sigh of relief, having made the world safer for those offended by tweets – and more ignorant of the threat of radical Islam.

Ben Shapiro is Senior Editor-At-Large of Breitbart News and The New York Times bestselling author, most recently, of the book, The People vs. Barack Obama: The Criminal Case Against The Obama Administration (Threshold Editions, June 10, 2014). Follow Ben Shapiro on Twitter @benshapiro.