LOS ANGELES, California — Congressman Xavier Becerra (D-CA) says he is still undecided about how he will vote on the controversial Iran deal.

However, Becerra is under strong pressure from members of left-leaning groups such as Moveon.org and Peace Action, which are strongly in favor of the historic accords and which had a strong presence during his town hall meeting at the Glassell Park Senior Center on Saturday.

Becerra, a seasoned Democratic politician with over 20 years of experience, said that while his “default” is to be able to move towards voting in favor of the deal, he still needs time to verify that Iran won’t cheat. “I would love to say that I am ‘yes’ to the deal,” he said but noted “ambivalence and concern” about the inability to verify whether or not Iran will be cheating.

“To me, the bottom line is this: I need to know that there is a way of verifying any activity. And two, I need to make sure that whatever we do, it is a ‘we’ that’s doing it because ‘we’ means not just the U.S. It means the international community.”

He argued, conversely, that saying “no to the deal” could isolate the United States from the “U.N., European Union and all the rest.” He continued: “Could we then, without the team, keep the pressure on Iran to do what it should?”

Becerra noted that Iran had come to the negotiating table in order to escape the financial pressures as a result of crippling economic sanctions. “The moment that international pressure is released, I think that it’s difficult to be able to keep tabs on what Iran is doing completely.”

The names of several town hall participants were hand-picked by Becerra at random out of a clear, plastic bowl so they could ask questions. Inquiries were not allowed outside of that format.

Approximately half of the questions asked were from anti-war group MoveOn.org and Peace Action West members and volunteers who were present as part of an “Astroturf” campaign to create an impression of public support for the Iran deal. Their schedule of planned appearances at town hall meetings throughout the nation was posted on “60 Days to Stop a War” website. (They have failed to show up at many previous town halls.)

“I want to make sure it’s a peace deal,” he said in response to a question from a member of Peace Action West. “I was told that voting for war in Iraq was going to bring us peace. And so I want to make sure that when I vote for something it’s a vote for peace.” 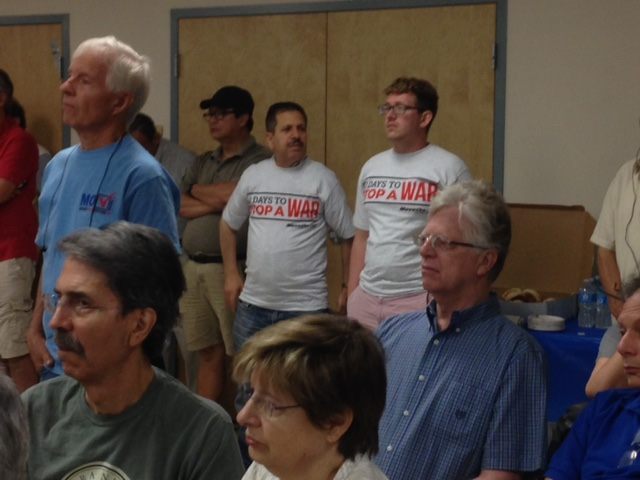 Breitbart News spoke with Joe Cicero from Peace Action West, who criticized fellow California Democrat Rep. Brad Sherman’s decision to come out against the deal. “I think he should get behind the president and the rest of the Democratic Party in doing the right thing and voting to support the deal.”

Asked if Iran will cheat, he echoed President Obama, saying “this deal is not based on trust. It’s based on verification. This deal has the most intrusive inspections of any nuclear treaty in history.”

When asked about his feelings on the secret “side deal” that allows Iran to self-inspect its Parchin nuclear facility, Becerra said, “We said one more question [and] that was three. Nice working with you.”

In closing, Becerra praised the president, Secretary of State John Kerry and Energy Secretary Ernest Moniz for doing a “remarkable job” in their attempt “to come up with some terms” and negotiate the accords.