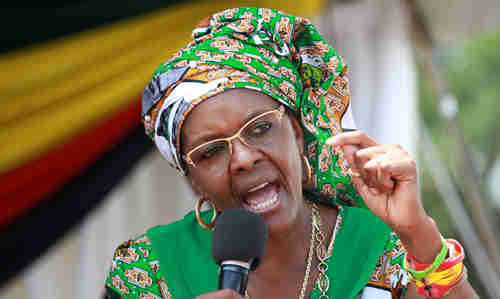 Grace Mugabe, the young wife of 92-year-old Robert Mugabe, who he wants to be his successor

Zimbabwe is being suddenly riven by anti-government demonstrations and clashes with security forces that erupted into a major political force almost spontaneously earlier this month, fed by social media with the hashtag #ThisFlag.

Evan Mawarire, the 39-year-old pastor of the His Generation Church in the capital city Harare, used social media to organize a nationwide “stay-away,” a shutdown of schools, businesses and shops around the country. Since any sort of government protest can be punished violently by the government of the 92-year-old president Robert Mugabe, Mawarire chose the national flag as the symbol of protest, along with the hashtag #ThisFlag. According to Mawarire, the Zimbabwe flag used to be a symbol of national pride, but today it is a symbol of endemic corruption, injustice, starvation, and poverty in the country.

The July 6 national shutdown shut down much of the country, and Mawarire was summoned by police for questioning, and was charged with inciting public violence, disturbing the peace, and treason. Mawarire might have been locked up for years, or even tortured and killed, as is not uncommon in the Mugabe government. But court officials were shocked when nearly 200 young lawyers flocked to Harare’s Magistrate’s Court and volunteered to represent the pastor. The police were forced to free Mawarire after only one night in custody, and drop the charges.

After being freed, Mawarire posted on his Facebook page to his followers:

You did so well. There was no violence. No one was fighting. No one was throwing stones. Zimbabweans are peaceful people and we can do this very well with peace… Continue to pray for Zimbabwe. God is doing something special and amazing.

Several Christian organizations — the Zimbabwe Catholic bishops’ conference, the Evangelical Fellowship of Zimbabwe, the Zimbabwe Council of Churches, and other groups issued a statement condemning Mugabe for apparent disregard for the constitution by the government and police and failure to deal with corruption. “These grievances must be viewed as the early warning signs which indicate underlying and simmering tensions that will soon explode into civil unrest if not addressed.”

In fact, widespread civil unrest is exactly where this is headed, from the point of view of Generational Dynamics. Zimbabwe is in a generational Awakening era, like America and Europe in the 1960s and 1970s, and the first post-war generation (like America’s Boomers) are on the path to holding massive protests. Zimbabwe’s last generational crisis war was the war for independence that climaxed in 1980. Mugabe’s government has used massive arrests, massacres, atrocities and torture to stop earlier protests, but this protest could not be stopped because it used social media, and because the form of the protest was for the protesters to stay and home and shut down the country, rather than march through the streets. Now that one protest has been successful, it is likely that there will be more.

As we described earlier this month in “1-Jul-16 World View — Zimbabwe, Venezuela, Puerto Rico – three amigos in Marxist economic destruction”, Zimbabwe is in the midst of a major financial crisis because Mugabe has destroyed the nation’s economy by shutting down the farms and businesses, because they were run by whites, and turned them over to corrupt cronies in his own Zanu-pf political party who could not run a business or a farm if their lives depended on it. Zimbabwe was the breadbasket of Africa in the 1990s, but it took Mugabe only a few years to destroy the economy, and to give away the pieces to his corrupt cronies, leaving his political enemies to starve. Mugabe’s breathtaking destruction of the country’s economy is a major motivation for the protests occurring now. Religion News Service and Catholic News Agency and The Zimbabwe Mail and Nehanda Radio (Harare)

The success of the #ThisFlag movement has triggered other forms of protest. On Thursday, Robert Mugabe’s most loyal supporters, the Zimbabwe National Liberation War Veterans Association, suddenly turned on Mugabe.

These were the veterans that fought alongside Mugabe in the war of independence. After the war, they were in the front lines of torturing and massacring Mugabe’s political enemies. Any anti-Mugabe protestor could count on being arrested and beaten at the hands of Mugabe’s war veterans. The veterans have formed the backbone of Mugabe’s party, the Zimbabwe African National Union-Patriotic Front (Zanu-pf).

So the surprise move to turn against Mugabe has significantly changed the political landscape in Zimbabwe. According to the statement:

We note, with concern, shock and dismay, the systematic entrenchment of dictatorial tendencies, personified by the president and his cohorts, which have slowly devoured the values of the liberation struggle…

However, one should not assume that this change of heart was motivated by feelings of guilt over past tortures and massacres. Actually, it was motivated by the fact that Mugabe had ordered the firing of the chairman of the veterans association, Christopher Mutsvangwa. According to the statement:

We still recognize Cde Christopher Mutsvangwa as our national chairperson amongst the war veterans and Mugabe should be warned Mutsvangwa cannot be fired willy nilly as that has to be done through a congress. Mugabe is fond of firing from the party anybody who raises a voice against him and we are saying no enough is enough.

This is taking place in the context of a growing battle over Mugabe’s successor as leader of Zanu-pf. The 92-year-old Mugabe claims that his plans are to live past the age 100, but others are not so sure.

In February, police used tear gas and water cannons to disperse hundreds of veterans who were demonstrating against what they described as criticism by Grace Mugabe. According to the veterans’ statement:

Regrettably, the general citizenry has previously been subjected to this inhuman and degrading treatment without a word of disapproval from us. That time has passed. We wish to categorically condemn the brutal suppression of the freedom of expression, whether exercised by ourselves or by anyone else.

From the point of view of Generational Dynamics, this is a very interesting story because it shows how very different cultures can have Awakening eras with many similarities. What unites Awakening eras across all cultures is the rise of the first generation following the previous generational crisis war, and the appearance of marches, demonstrations and other forms of protest, just as occurred in America and Europe in the 1960-70s.