Evidence of Burma ethnic cleansing of Rohingyas continues to mount 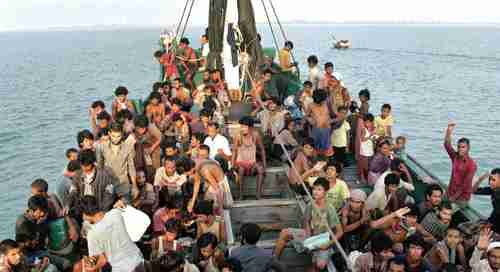 According to the International Organization for Migration, around 21,000 ethnic Rohingyas from Myanmar (Burma) have fled across the border from Rakhine state to Bangladesh to escape violence by Burma’s army.

As we have been reporting, Human Rights Watch has posted satellite images that show that villages of Rohingya Muslims are being systematically burned down. Some 30,000 Rohingyas have been displaced. Myanmar officials continue to make the laughable claims that the Rohingyas are burning down their own homes to embarrass the government. Burma’s government is refusing to allow journalists into the region where the violence is taking place, but the BBC World News has broadcast footage of an undercover road trip through the region, including interviews who says that their husbands were burnt and killed by soldiers, and that they were repeatedly raped by soldiers.

The root of the violence is xenophobic attacks by Buddhists led by Buddhist monk Ashin Wirathu and his “969 movement,” against the Rohingya Muslims, including rapes, torture and other atrocities committed by Buddhists, targeting the Rohingyas. The Rohingyas have darker skin than Burmese, and they speak a Bengali dialect. They are, for all practical purposes, a stateless ethnic group, living on the Bangladesh-Burma border for generations, but rejected by both countries. In fact, Burma refuses to identify the Rohingya as a unique ethnic group, preferring to call them Bengali, and referring to them as illegal immigrants from Bangladesh. In the last few years, large mobs of Buddhists have massacred entire neighborhoods of Muslims in various regions of the country, mutilating, raping and killing hundreds, and displacing thousands from their homes.

Nobel Peace Prize winner and democracy icon Aung San Suu Kyi has been praised in the past for her support of human rights, but she is losing her luster as an international superstar as she is being increasingly condemned for refusing to speak out to condemn the current Buddhist violence against the Rohingyas. Under international pressure, Suu Kyi has formed a special committee to investigate the violence, but the committee is headed by an army general for the same army that’s committing the violence, so the investigation is not considered credible. Deutsche Welle and AFP and Bangkok Post

It is a rule of the Association of Southeast Asian Nations (ASEAN) that member states are forbidden from interfering in each other’s internal affair.

So Malaysia’s prime minister Najib Razak violated that rule on Sunday, when he spoke to thousands at a pro-Rohingya rally in Kuala Lumpur. He questioned Aung San Suu Kyi’s Nobel Prize, given her inaction, and said to thousands of Malaysians at the rally:

Buddhist monks in Myanmar, from the Nationalist Monk Association, led a protest of about 150 people in Yangon, holding banners and chanting. An official in Myanmar said that Najib is wrong:

What he said in Malaysia is not true. We’re trying to solve (this) with the international supporters. But it’s our choice, no other country can make (a) decision about our country.

He accused Najib of stoking religious extremism in order to score political points in Malaysia.

In Malaysia, hundreds of people from the hardline Islamist group Hizbut Tahrir, marched to the Defense Ministry, and demanded that Malaysia’s army conduct a jihad against Burma. According to the group’s statement:

There is no other solution to save Rohingyan Muslims except mobilizing the army to Myanmar, because the reality is the Arakan [Rakhine State] Muslims are being pummeled by Myanmar’s infidel army.

“The Armed Forces is obliged to help the Rohingyan Muslim by accepting the Allah’s call for jihad at the kafir harbi [infidels] country.”

The Somali-born student who launched a car-and-knife attack at Ohio State University this week reportedly protested on his Facebook page about the killing of minority Muslims in Myanmar. And last weekend, Indonesian authorities arrested two militants who were allegedly planning to attack the Myanmar Embassy in Jakarta.

Online extremists in Indonesia have expressed their desire to mount “jihad” on behalf of the Rohingya, with some supporters hoping that the ‘mujahidin’ will be able to smuggle into Myanmar. The Rohingya crisis has become a rallying cry for jihad. Some social media users in Indonesia have gone to the extent of declaring their readiness to be suicide bombers for the sake of the Rohingya. The Rohingya issue is fast developing into a security threat that would have an adverse impact on peace in the region. VOA and RSIS (Singapore) and The Statesman (India)