New fighting between Ukraine and Russia flares up in eastern Ukraine 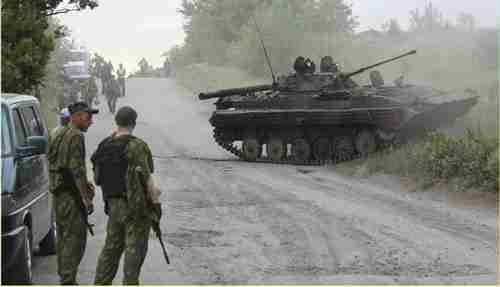 Soldiers and tank in eastern Ukraine

After almost two years of stalemate in the fighting in Donbass in eastern Ukraine between the Ukrainian army and Russian anti-government militias, the fighting has suddenly flared up again in the last three days. Heavy artillery shelling on both sides has killed at least 33 civilians, and has left thousands of people in the government-held town of Avdiivka without water and electricity, at a time when temperatures at night fall to -20C (-4F).

Several analysts are saying that the renewed fighting is a reaction to the new Trump administration. Kiev-based independent political analyst Vadim Karasyov said an escalation in the east could be beneficial to both the separatists and the Ukrainian government:

Kiev is eager to win support of the new Trump administration, and for this they need to show that separatists and the Kremlin are derailing the peace accords. For the Kremlin, it’s important to show that it holds war and peace in its hands — if the new U.S. administration wants peace in Ukraine, it needs to offer something in return.

Russian troops invaded eastern Ukraine after anti-Russian protesters in Kiev, Ukraine’s capital city, forced the pro-Russian president Viktor Yanukovich to step down, after he reneged under pressure from Moscow to to sign a trade agreement with the European Union.

The worst occurred in July 2014 when the Russians in eastern Ukraine shot down Malaysia Airlines Flight MH17 passenger plane with a Russian Buk 9M38 missile that was transported by a Volvo truck from Russia.

After Russian troops annexed Ukraine’s Crimea Peninsula in 2014, the war in eastern Ukraine became stalemated, as Russia moved its troops and supplies away from Ukraine to Syria. But now the fighting is escalating again, and there are fears that a larger war may result again. AP and Al Jazeera and EurActiv

About 3,500 American troops conducted live-fire exercises with Polish troops on Tuesday. Poland’s president Andrzej Duda welcomed the US commitment of troops, calling it a “historic moment”:

We welcome our allies here today with open arms. I do believe that this presence is going to further strengthen the transatlantic bond and our collective security.

The US commitment of troops came about because of Russia’s invasion of Ukraine and annexation Crimea. Anxieties were raised in Poland other countries that they might be next. That explains the effusive praise that the American troops are receiving. Many Poles consider the threat from Russia real, and believe that the Russians will not invade Poland if it meant firing on American soldiers.

After the military exercises, the soldiers are to be distributed across Poland, Bulgaria, Romania, and the Baltic countries. The headquarters unit will be stationed in Germany. Radio Poland and Russia Today