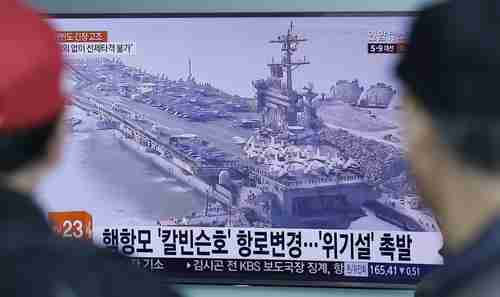 In North Korea, Saturday, April 15 is called “The Day of the Sun.” It is the 105th anniversary of the birth of North Korea’s founder, Kim Il-Sung, whose name means “Sun of the Nation.”

Kim Il-Sung was the grandfather of the current child dictator, Kim Jong-un. Kim likes to do provocative things on a regular basis, and particular likes to do something spectacular on April 15.

But a lot of analysts will be very surprised if North Korea doesn’t perform a new nuclear test, possibly along with some new ballistic missile tests, sometime in the next month.

If Kim Jong-un does do something provocative and spectacular, many people are wondering how the United States will respond, particularly since President Donald Trump ordered the missile strike in Syria, after Syria’s government killed hundreds of people with a Sarin gas attack two ago, and after Trump ordered the Carl Vinson aircraft carrier strike group to the Korean Peninsula.

On Thursday, Trump wrote a tweet that he believes China will be able to rein in the North. “I have great confidence that China will properly deal with North Korea. If they are unable to do so, the U.S., with its allies, will! U.S.A.” 38 North and Pravda (Moscow) and Washington Post

Japan, which is the only country in the world to have been hit by a nuclear weapon, is particularly concerned about being attacked by a North Korean nuclear weapon. Tensions have been particularly raised by North Korea’s repeated tests of ballistic missiles launched in the direction of Japan. None of the tests has struck Japanese soil, but some have reached the Sea of Japan.

Japan’s prime minister Shinzo Abe’s ruling Liberal Democratic Party has been advocating a proposal to develop the capability to directly attack North Korean military bases. Japan is still bound by a post-World War II pacifist constitution that permits military action only for defensive purposes, and so Abe emphasized that Japan has no plan to acquire such powerful weapons and would never launch a pre-emptive strike against any country.

However, Abe pointed out that North Korea could attack Japan with Sarin gas:

There is a possibility that North Korea has the ability to hit (Japan) with a ballistic missile carrying sarin in its warhead.

Abe pointed to the Syria’s sarin gas attack last week, where “nearly 100 innocent people, including children and babies, were victimized.”

Just as Japan was the target of a nuclear weapon, Japan has also been the object of a sarin gas attack. Members of a Japanese doomsday cult killed 12 people and made thousands ill in 1995 in simultaneous attacks with sarin nerve gas on five Tokyo rush-hour subway trains.

Concerns have been growing about North Korea’s chemical weapons capabilities since Kim Jong-un’s estranged half brother, Kim Jong-nam, was killed with VX nerve agent in Malaysia in February.

According to Yoshihide Suga, Abe’s top aide, “North Korea is thought to maintain multiple facilities that are capable of producing chemical weapons and already hold a sizable amount of chemical weapons.”

The South Korean Defense Ministry has estimated that Pyongyang, which reportedly started producing chemical weapons in the 1980s, now owns 2,500 to 5,000 tons of chemical weapons, including the lethal nerve agents sarin and VX. Japan Times and Reuters

In 1961, China and North Korea signed a mutual defense treaty that specifies that if one of the parties comes under armed attack, the other should render immediate assistance, including military support.

It is this umbrella of protection that has allowed North Korea to make increasingly provocative acts, knowing that China is required by treaty to protect it. In 2010, North Korea launched a missile attack on the South Korean warship Cheonan, killing 46 people, and then North Korea shelled South Korea’s Yeonpyeong Island, killing four South Koreans. These were both clearly acts of war, but China staunchly defended North Korea, and South Korea was unable to retaliate.

However, it has been clear that China has been running out of patience with North Korea’s renegade leader Kim Jong-un, who has been conducting nuclear weapons and ballistic missile tests that violations of international law and are strongly opposed by China. So analysts are wondering under what circumstances China would invade North Korea, either to defend it against South Korea and the US, or to take control of North Korea for its own purposes.

An analysis by the Hong Kong-based South China Morning Post suggests that China is no longer obliged to defend North Korea from military attack under the 1961 treaty, since North Korea has repeatedly violated the treaty.

The treaty requires both nations to safeguard peace and security, and for China, North Korea’s development of nuclear weapons in violation of the United Nations treaty on non-proliferation could amount to a breach of their pact, leaving Beijing with no obligation to lend a hand.

According to Li Jie, a retired Chinese naval colonel:

It’s hard to say how China would assist North Korea militarily in case of war, since North Korea is developing nuclear weapons, an act that might have already breached the treaty between the two nations.

A different analysis in Chinese state-sponsored Global Times acknowledges that North Korea’s development of nuclear weapons is intolerable to the United States, and notes that Trump has warned that if China doesn’t take care of North Korea’s nuclear weapons, then the US will.

According to the analysis, China would be willing to impose even harsher sanctions on North Korea, including the devastating sanction of ending oil imports, if China continues its illegal testing:

If Pyongyang conducts its sixth nuclear test in the near future, the possibility of US military action against it will be higher than ever. Not only is Washington brimming with confidence and arrogance following the missile attacks on Syria, but Trump is also willing to be regarded as a man who honors his promises.

Now the Trump team seems to have decided to solve the North Korean nuclear crisis. As the discussion runs deeper, a situation of no-solution will not be accepted.

A new nuclear test or an intercontinental ballistic missile test, if conducted by Pyongyang at this time, will be a slap in the face of the US government and will intensify the confrontation between North Korea and the US.

More and more Chinese support the view that the government should enhance sanctions over Pyongyang’s nuclear activities. If the North makes another provocative move this month, the Chinese society will be willing to see the UNSC adopt severe restrictive measures that have never been seen before, such as restricting oil imports to the North. Pyongyang’s nuclear weapons program is intended for securing the regime, however, it is reaching a tipping point. Pyongyang hopes its gamble will work, but all signs point to the opposite direction.

The US is making up its mind to stop the North from conducting further nuclear tests. It doesn’t plan to co-exist with a nuclear-armed Pyongyang.

A third analysis was performed by KGS Nightwatch by examining some Chinese government and military newsletters that have addressed North Korea’s nuclear weapons development in recent days. This analysis addresses a different question: Under what circumstances would China intervene militarily in North Korea. There are four tripwires listed in the analysis:

South Korea’s media reported earlier this week that the Chinese army has deployed about 150,000 troops in two groups to northeastern China near the Yalu River, “to prepare for unforeseen circumstances,” in view of the arrival of the Carl Vinson strike force.

However, China has denied deploying these troops.

There is a surreal quality of fantasy about these reports of Chinese military actions. China is planning this or that military action with no fear of losses or of international retribution, as if the Chinese were invincible. And whenever I read about China’s military plans about anything, I get the feeling of invincibility, as if they are saying, “All we want is peace and stability, so just do as we command you to do and there will always be peace and stability; and if you don’t, then we’ll just kill you, and we’ll get peace and stability that way.”

So let’s make it clear. Any of the military actions discussed in this article, even a “small” military action, will spiral into something bigger in this generational Crisis era, and will spiral further into a world war within weeks or at most a few months. Nobody is invincible here, and China would be worse off than many because it would be fighting both a civil war and an external war. I’ve estimated that a world war will kill 3-4 billion people from nuclear weapons, ground war, disease and starvation, leaving 3-4 billion traumatized people behind to hold peace conferences and rebuild the world. South China Monring Post (Hong Kong) and Global Times (Beijing) and KGS Nightwatch and Chosun (South Korea) (Trans) and Global Times (Beijing)