US, Russia, Jordan agree on ceasefire deal for southwest Syria 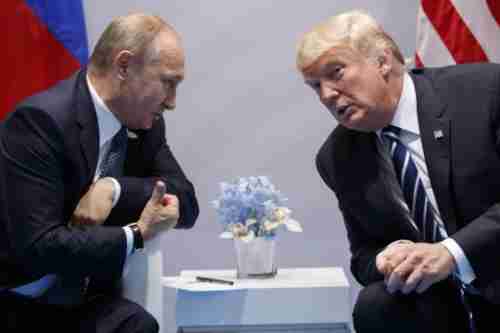 The United States and Russia have brokered a ceasefire in a “de-escalation zone” in southwest Syria. The agreement was reached in a meeting between US president Donald Trump and Russia’s president Vladimir Putin on the sidelines of the G20 summit in Hamburg on Friday. This meeting was the culmination of weeks of secret negotiations held in Amman, the capital city of Jordan. The zone to which the ceasefire applies is on Syria’s borders with Jordan and Israel. Jordan and Israel were consulted during the negotiations, and are included in the agreement. Syria and Iran have agreed to the deal.

According to the Russian press, the purpose of the de-escalation zone is to help “disengage” (whatever that means) armed opposition from groups recognized as terrorists by the UN Security Council. These include the so-called Islamic State (IS or ISIS or ISIL or Daesh), al-Qaeda, and al-Qaeda-linked groups like Al-Nusra Front (now known as Jabhat Fateh al-Sham).

According to Russia’s foreign minister Sergei Lavrov, a monitoring center will be set up in Amman, Jordan, to be used to oversee the ceasefire:

We agreed to use a monitoring center established by Russia, the US and Jordan in Amman to coordinate all the details of functioning of these de-escalation zones.

According to Lavrov, many of the details have not be worked out. However:

In this zone [southeastern Syria, in southern Daraa, Quneitra and As-Suwayda provinces] the ceasefire regime will take effect on July 9 starting 12:00 Damascus time. The US took an obligation that all the militant groups, located there, will comply with the ceasefire.

At first, the security around this de-escalation zone will be maintained with the help of Russian military police in coordination with the Jordanians and Americans.”

At the G20 summit on Friday, U.S. secretary of state Rex Tillerson said at a news conference:

I think this is our first indication of the US and Russia being able to work together in Syria, and as a result of that we had a very lengthy discussion regarding other areas in Syria that we can continue to work together on to de-escalate the areas.

The ceasefire took effect on Sunday at noon, Damascus time. Syrian ceasefires in the past have usually fizzled within a couple of weeks, but as of Monday evening, this ceasefire appears to be holding, with only scattered violations. Russia Today and Russia Today and Times Live (South Africa)

Israel will welcome a genuine ceasefire in Syria but this ceasefire must not enable the establishment of a military presence by Iran and its proxies in Syria in general and in southern Syria in particular.

[We] had deep discussions about this last week with US Secretary of State Tillerson and with Russian President Vladimir Putin. Both told me that they understand Israel’s position and will take our demands into account. …

[These demands include the following:] Prevent the strengthening of Hezbollah via Syria, with emphasis on the acquisition of precision weapons, prevent Hezbollah – or Iranian forces – from establishing a ground presence along our border, and prevent the establishment of an Iranian military presence in Syria as a whole.

According to some reports, Netanyahu is opposed to Russia’s military police taking sole responsibility for monitoring the ceasefire along Syria’s border, and is demanding that United States forces be involved. Reading between the lines of Lavrov’s statement (quoted above), Russia appears to concur.

Although Israel is committed to avoiding getting involved in Syria’s war, Israel has targeted Syrian weapons convoys headed for Hezbollah to be used against Israel and has targeted Syrian launchers when mortar shells from Syria landed in the Golan Heights. Since Russia is such a close ally of Syria and Hezbollah, Israel is insisting that Russia not be the sole guarantor of the ceasefire. Israel National News and Reuters and YNet News and Israel Rising

For months, Russia and the Syrian regime have complained that America’s military presence in Syria is a violation of international law because unlike Russian forces, American forces have never been invited into Syria by the Syrian regime.

The response is that with Syria’s ISIS conducting terror attacks around the world, including the US and Europe, and with Syria flooding Europe with millions of refugees, the West is perfectly justified under international law to enter Syria and kill off ISIS, for its own protection and self-defense. There is no reason why the West should just sit and wait for ISIS to conduct the next terror attack, since obviously al-Assad is incapable of stopping ISIS, and may be promoting the terror attacks on Europe.

These arguments may now be mooted by the ceasefire agreement. The Syrian regime has approved the agreement and it specifically invites American forces into Syria. Therefore, I assume that America’s military in Syria is fully supported by international law.

However, the other side of that observation is that American forces are getting more deeply involved in the war in Syria. If the war settles down into a nice friendly peace, then that would be no problem. However, it is far more likely that the current “ceasefire” is merely serving to allow all the various forces – the Russians, the Syrian regime, Hezbollah, the Iranian forces, the remnants of ISIS, al-Nusra, the Free Syrian Army, the Turks, the Kurdish People’s Protection Unit (YPG), and probably others – to replenish their weapons stores and reposition their forces, in preparation for the next battle after the ceasefire collapses. This is particularly true in Deir az-Zour in eastern Syria, which will be a major battleground in the months to come.

There has been the usual mainstream media criticism of president Donald Trump for having a chaotic foreign policy, and for working closely with Russia’s president Vladimir Putin, whom many Americans see as an enemy.

For example, Richard Haas, president of the Council of Foreign Relations, was interviewed on the BBC on Monday, and was asked why this president “has been reluctant to be harsh on Russia and Putin.” His response:

I think that’s still a mystery for which we don’t have an answer. Whether it has something to do with that, or as you know there’s any number of forms of speculation. All I can say is after a couple of years, Mr. Trump is has staked out what you would call a consistently benign or sanguine view towards Russian behavior. I don’t understand it on the merits, so like a lot of other people, I keep wondering whether there’s something that lies behind it, and if so what?…

I do not see [the Russians] as a natural partner of the United States in most situations.

Haas is wondering “whether there’s something that lies behind it,” and as regular readers are aware, there is definitely something behind it. Trump’s foreign policy is not chaotic at all, but is completely consistent and principled, because his close advisor Steve Bannon deeply understands Generational Dynamics theory, and they are guided by that theory.

As I’ve been writing for years, Generational Dynamics predicts that in the approaching Clash of Civilizations world war, America and the West will be aligned with India, Russia and Iran, while China will be aligned with Pakistan and the Sunni Muslim countries. The Trump administration’s “consistently benign and sanguine view” of Russia is guided by this analysis, and the fact that Russia will be our ally.

That is not to say that one can be sanguine about the situation in the Mideast. Everyone is united now in their determination to defeat ISIS in Mosul, Iraq, and in Raqqa, Syria. The Iraqi military declared “Mission Accomplished!” on Monday in Mosul, and victory in Raqqa is expected within weeks. After that, the increasingly vicious Shia-Sunni split will become more exposed, and any one of the warring parties in Syria may decide to take action. Washington Post/AP and Al Monitor and LA Times