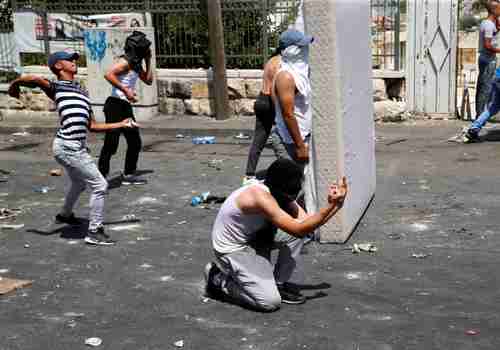 Thousands of Palestinians heeded the words of Muslim leaders and Palestinian political factions and came to Jerusalem’s al-Aqsa mosque on Friday to protest the metal detectors that Israeli security forces had placed outside the al-Aqsa Mosque / Temple Mount compound. Three Palestinians were killed and hundreds injured in the worst Jerusalem violence in years at the al-Aqsa mosque, while three Israelis were killed in their homes by a knifing attack in the same time frame.

Thousands of Palestinians refused to enter the al-Aqsa Mosque for Friday prayers, which would have required going through metal detectors. Instead, they filled the streets and prayed peacefully, facing Mecca. Israel had deployed 3,000 police and soldiers in and around Jerusalem’s Old City, in order to keep the situation under control.

But after the Friday prayers ended, many of the Palestinians confronted police, throwing stones and other objects, as police responded with stun grenades, water cannons, and tear gas. Three Palestinians were shot dead in separate incidents during the clashes.

In a separate incident, a Palestinian teenager broke into an Israeli home in a West Bank settlement as the family was eating dinner and began stabbing family members, killing a man and two of his children.

A number of anti-Israel protests were held in capitals across the Middle East and Asia on Friday. Thousands gathered in Amman, Beirut, Istanbul and Kuala Lumpur Friday afternoon in solidarity with Palestinian worshipers in Jerusalem who have been protesting the metal detectors. BBC and Times of Israel and Reuters and Times of Israel

Israeli officials point out that metal detectors are used in Jewish and Muslim holy sites around the world, including at the mosques in Mecca and Medina. However, Palestinian activists insist that they cannot be used at the al-Aqsa mosque. Some have accused the Israelis of a plot to take control of the al-Aqsa mosque, and of using the metal detectors as a step in that plot. One Israeli Islamic leader, Kamal Khatib, accused the Israelis of inserting chemical substances into the al-Aqsa Mosque wall to cause corrosion, and give the Israelis an excuse to take over the mosque as its walls deteriorate.

Israeli government officials themselves have been split on this issue, with some arguing that the metal detectors are so divisive that it would be better to remove them. However, the government made a final decision that they would not be removed.

Palestinian Authority president Mahmoud Abbas announced late on Friday that he was freezing all contacts with Israel:

I, on behalf of the Palestinian leadership, announce … a freeze of all contacts with the occupation state on all levels until Israel commits to canceling all the measures against our Palestinian people in general and Jerusalem and Al-Aqsa mosque in particular.

[The measures were] falsely presented as a security measure to take control over Al-Aqsa mosque.

The steps taken by Israel are leading to a religious confrontation and an evasion from a diplomatic process.

Israeli security forces have announced that the metal detectors and other security measures are necessary for the safety of the worshippers, and will not be taken down.

So it appears that a major power struggle is in progress, and one side or the other will have to step down.

Abbas is very unpopular with the Palestinian people, who see him as a failed leader who has been unable to do anything to end Israel’s occupation of the West Bank, despite having been in power for years. Friday’s announcement was undoubtedly motivated at least partially to increase his popularity.

If the security agreement were suspended, it would mean that Israel would have to deploy thousands of its own police in cities across the West Bank, something that would be even less popular with Palestinians than the agreement itself. Abbas has threatened to end the security agreement in the past, but has never done so, probably for these reasons. Washington Post and Times of Israel and MEMRI