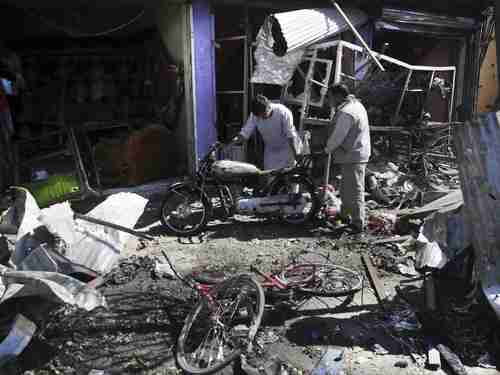 The blast occurred in a part of the city where the ethnic Hazara community live, near the house of the deputy government Chief Executive Mohammad Mohaqiq, also a Hazara. The Hazaras are Shia Muslims and have often been targeted by Taliban groups in both Pakistan and Afghanistan.

The same area has been the scene of several attacks, including the suicide attack that killed prominent Shia Muslim cleric Ramazan Hussainzada on June 15. Hussainzada was also a senior leader of Afghanistan’s Hazara community.

Monday’s massive attack occurred exactly one year after another massive Taliban attack on Hazaras in Kabul. At least 80 people were killed in what was considered the worst terror attack in Kabul since 2001.

The attack on Hazaras last year on July 24 energized the “Hazara Enlightenment Movement,” an activist movement demanding an end to discrimination against Hazaras by the Pashtun government. There was a big march planned for Monday to commemorate last year’s attack, but Afghan president Ashraf Ghani convinced the movement leaders to cancel the march, for reasons related to security. The march was cancelled and then, several hours later, Monday’s massive car explosion took place.

In the future, we can expect to hear more from the Hazara Enlightenment Movement. Tolo News (Kabul) and Reuters and Khaama Press (Kabul)

There is a fantasy at large among politicians, generals, journalists, and analysts in various nations around the world that the Taliban in Afghanistan can be convinced to enter peace negotiations, or that they can be defeated on the battlefield, or that they will get tired of fighting. This is the sort of fatuous nonsense that politicians and generals tend to claim when they are fighting the last war.

Afghanistan’s last generational crisis war was the extremely bloody civil war fought between 1991 and 1996, filled with enormous atrocities, massacres, rapes, torture, and so forth. The war was fought mainly between the Pashtuns in southern Afghanistan versus the Northern Alliance of Tajiks, Hazaras, and Uzbeks in northern Afghanistan.

The Pashtuns won that war. Radicalized Pashtuns called themselves the Taliban, and ruled Afghanistan brutally and viciously after the war. They also permitted their good pal Osama bin Laden to use Afghanistan as a home base from which to launch international terror attacks. After 9/11/2001, the U.S.-based coalition invaded Afghanistan and backed the Northern Alliance in quickly defeating the Taliban. Thus, the Pashtun victory in the civil war was snatched away and turned into defeat for the Pashtuns and victory for the Northern Alliance.

The reason that the Taliban lost the 2001 war so quickly was that everyone was traumatized and war-weary from the civil war in the previous decade, and had little will to fight another war. That is what always happens to the generations that survive a generational crisis war. They are traumatized by the atrocities the other side committed, but they are even more traumatized by the atrocities that they and others on their own side committed.

Today, sixteen years later, a new, younger generation is coming of age, with no personal memory of the 1990s civil war. These young Pashtuns have not been told of the atrocities that their parents committed. They have only been told of the atrocities that the other side committed – the Tajiks, Hazaras, and Uzbeks in the Northern Alliance. They want revenge for those atrocities, so they do things like set off car bombs in crowds of Hazaras in Kabul.

So those who are looking for a way to bring peace to Afghanistan are dreaming. There is no solution to this problem. And when I say “no solution,” I do not mean that the politicians and generals simply have not been clever enough to figure out the solution. What I mean is that no solution exists. Taliban is strongest today as it has been since 2001, and will continue to get stronger, as young post-war generations continue to grow and come of age.

Monday’s bombing makes clear that America, the World’s Policeman, has a stark choice in Afghanistan: walk away and let the Taliban take over completely, or try a military solution with more American troops.

President Barack Obama, who never had a clue what was going on in the world, decided to go for a 30,000 troop surge. In December 2009, Obama gave a West Point speech where he announced the surge:

As cadets, you volunteered for service during this time of danger. Some of you fought in Afghanistan. Some of you will deploy there. As your Commander-in-Chief, I owe you a mission that is clearly defined, and worthy of your service. And that’s why, after the Afghan voting was completed, I insisted on a thorough review of our strategy. Now, let me be clear: There has never been an option before me that called for troop deployments before 2010, so there has been no delay or denial of resources necessary for the conduct of the war during this review period. Instead, the review has allowed me to ask the hard questions, and to explore all the different options, along with my national security team, our military and civilian leadership in Afghanistan, and our key partners. And given the stakes involved, I owed the American people – and our troops – no less.

Obama was heavily criticized for announcing an 18-month end date, which he had to extend several times. Obama announced the Afghan troop surge in the hope of duplicating the success of President Bush’s troop surge in Iraq in 2007. I wrote a detailed comparison of the Afghanistan versus Iraq wars in mid-2009 in “American army general warns of imminent defeat in Afghanistan war,”, showing that the Iraq “surge” strategy could not work in Afghanistan. This comparison was based on a Generational Dynamics analysis, and it turned out to be completely correct. In the end, the troop surge accomplished nothing. In interviews last year, all three of Obama’s former secretaries of defense confirmed that the Obama administration ignored military advice, and made military decisions based on inexperience and ideology.

Now President Donald Trump is faced with the same decision. One difference is that his close adviser, Steve Bannon, knows very well what is going on in the world. As I’ve described in the past, I’ve worked with Steve Bannon off and on for several years in the past, both on his movie “Generation Zero” and when I was cross-posting articles on the Breitbart National Security site. So I know that Steve Bannon is an expert on military history and world history, and he also has an expert understanding of Generational Dynamics and generational theory.

So Steve Bannon understands very well the generational analysis that concludes that there is no solution to the problem in Afghanistan, and has undoubtedly conveyed this conclusion to Trump. And this has thrown the administration’s Afghan policy into confusion, with policy differences between those who are still fighting the last war and those who do not want to repeat Obama’s mistakes.

What should a politician do when you have to solve a problem for which there is no solution in existence?

One interesting example to look at is Greece’s financial crisis, when it became clear in 2009 that Greece had lied about its financials for years and was overwhelmingly and unsustainably in debt. The Greek crisis lurched from one last-minute fix to the next, with some sort of compromise often reached on Sunday night, before the Asian markets opened.

As I wrote many times, the Greek financial crisis had no solution. By that, I did not mean the EU politicians and economists have not been clever enough to figure out the solution. I meant there was no solution in existence. Indeed today, Greece is still overwhelmingly and unsustainably in debt.