Chinese Emperor Qin Shihuang carried out an intensive crusade for eternal life and ordered a nationwide search for an elixir of immortality, new archaeological research has revealed.

Research into a recently discovered collection of 36,000 wooden tablets shows that China’s first emperor, the creator of the celebrated 8000-piece terracotta army, was obsessed with the idea of immortality and commanded a massive search for something akin to the fountain of youth. In constant fear of death and assassination, Qin Shihuang reportedly never slept in the same room of his palace two nights in a row.

The emperor’s executive order reached even frontier regions and remote villages, according to researcher Zhang Chunlong of the provincial institute of archaeology. Studies of the wooden tablets also revealed responses from local authorities as to how the quest was progressing.

The village of Duxiang, for instance, reported to the emperor that it had failed to discover a miraculous elixir but that the search was ongoing, while the village of Langya proposed that an herb collected from a local mountain might prove to have the desired effect.

The 36,000 wooden slats, which date back two centuries before Christ, are connected to each other by strings and were found by archaeologists at the bottom of a well in China’s central Hunan province in 2002. Writing on such wooden tablets was the most common medium of writing in China before the appearance of paper in the early first millennium AD.

After centuries of war, Emperor Qin Shihuang (also known as Shi Huangdi or Shi Huangti) became the first leader of a unified China as well as the creator of the massive underground mausoleum in the northern province of Shaanxi, filled with about 8,000 terracotta soldiers molded to protect him in the afterlife. The mausoleum and terracotta army, discovered by villagers in 1974, are one of the most famous archaeological finds in the world and have been declared a UNESCO world heritage site. Excavations at the site continue to this day: 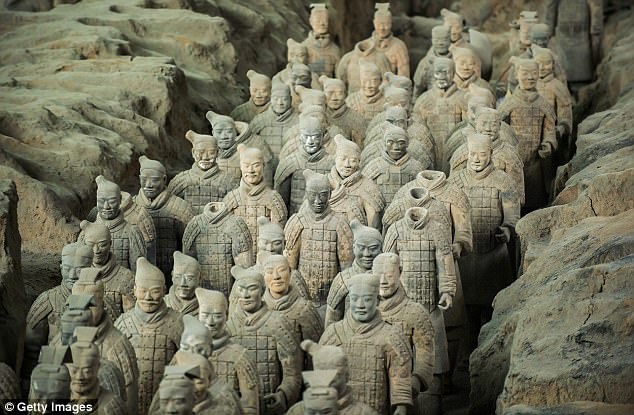 Besides these pursuits, the emperor also created a system of standardized weights and measures, national roads, and a unified Chinese currency. Qin Shihuang also began construction of the Great Wall of China as well as the Grand Canal and built the roads that today link the cities of China and the countryside.

Qin Shihuang reigned for 11 years and died at age 49 in 210 BC, ironically poisoned by ingesting one of the miraculous potions that were meant to make him immortal.

Following Qin Shihuang’s death, the Qin Dynasty became notorious for its book burnings and executions of literati and came to an end soon after, in the year 206 BC. The modern name of “China” is derived from “Qin.”