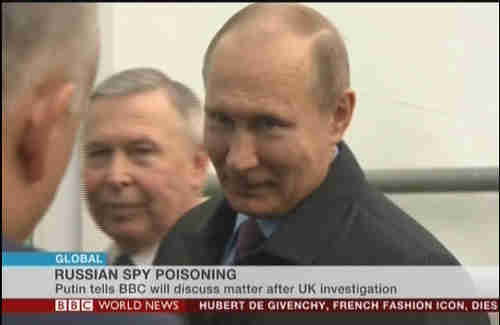 On Sunday, March 4, a policeman in Salisbury, England, found 66-year-old Sergei Skripal and his 33-year-old daughter Yulia unconscious on a bench. They were both hospitalized and are still in critical condition. The policeman who found them has also been hospitalized and is in serious condition.

Skripal was a Russian former double agent who had been released from Russian jail to the West in a prisoner exchange. He had lived a quiet life in Salisbury, though not under an assumed name. With all three people – Skripal, his daughter, and the policeman – all hospitalized, it was suspected that Russia had attacked them, and a full investigation was ordered.

On Monday, Britain’s prime minister Theresa May announced that the investigation was ongoing, but based on the information available so far, it was “highly likely” that Skripal had been poisoned by Russians, using a deadly nerve agent called Novichok that was developed in Russia.

The following are excerpts from May’s speech:

But as a nation that believes in justice and the rule of law, it is essential that we proceed in the right way – led not by speculation but by the evidence.

That is why we have given the police the space and time to carry out their investigation properly.

That investigation continues and we must allow the police to continue with their work.

It is now clear that Mr Skripal and his daughter were poisoned with a military-grade nerve agent of a type developed by Russia.

This is part of a group of nerve agents known as ‘Novichok’.

Based on the positive identification of this chemical agent by world-leading experts at the Defense Science and Technology Laboratory at Porton Down; our knowledge that Russia has previously produced this agent and would still be capable of doing so; Russia’s record of conducting state-sponsored assassinations; and our assessment that Russia views some defectors as legitimate targets for assassinations; the Government has concluded that it is highly likely that Russia was responsible for the act against Sergei and Yulia Skripal.

Mr Speaker, there are therefore only two plausible explanations for what happened in Salisbury on the 4 of March.

Either this was a direct act by the Russian State against our country.

Or the Russian government lost control of this potentially catastrophically damaging nerve agent and allowed it to get into the hands of others.

It is believed that this concept of “only two plausible explanations” was a carefully crafted phrase to allow Britain to demand that the Russians select from these two choices, either of which implies Russian guilt.

Britain has demanded that the Russian embassy respond by Tuesday evening, and explain which of the two possibilities it is, and how Novichok could have been deployed in Salisbury.

May said that when Litvinenko was killed, Britain expelled Russian diplomats and took other steps.

It is particularly shocking to the British public that the investigation found traces of the nerve agent Novichok in the pizza restaurant where Skripal and his daughter had been eating, indicating that assassins had put the general public in danger.

The British people appear to be furious at the Russians for conducting chemical warfare on British soil, and it is certain that there will be retaliation. Measures being discussed include expelling more diplomats, freezing more assets of Russian oligarchs, and applying more sanctions. Another recommendation is to ban the station Russia Today from being broadcast in Britain. Russia Today used to be a decent news station, but has turned into just a fairly worthless propaganda arm for the Kremlin.

However this unfolds, relations between Britain and Russia is going to become increasingly hostile. Mirror (London) and Guardian (London) and Reuters

At this point, we have to provide a brief list of all the lies that Russian officials have told in recent years.

Russia lied about invading east Ukraine when it had Russian troops in east Ukraine. Russia lied about invading Crimea, and Putin said Russia had no intention of annexing Crimea, but then annexed Crimea a few days later and gave medals to the military officers who had invaded Crimea. Later, in a televised interview, Putin bragged that he had ordered the invasion and annexation of Crimea weeks before it occurred, and then lied about it. Russia lied about shooting down the MH17 passenger plane with a Russian Buk missile, even though the Russian commander in Ukraine initially bragged about shooting it down in a tweet.

For Syria, Russia lied about Syria’s president al-Bashar Assad’s use of Sarin gas on his own people, Russia lied about the purpose of its military intervention into Syria as being to attack the so-called Islamic State (IS or ISIS or ISIL or Daesh).

Russia hired hundreds of paid internet trolls to attack and harass people like me who write about what Russia is actually doing and to post thousands of disinformation comments online.

In the case of shooting down the MH17 passenger plane, Russian media and trolls went into full-on troll mode, making one ridiculous claim after another: Russian commander Strelkov’s tweet had never occurred; the U.S. had shot down MH17 to embarrass Russia; the airplane was struck by a meteor; no living people were aboard the plane as it flew on autopilot from Amsterdam, where it had been pre-loaded with “rotting corpses.”

The point is that everything the Russians say has zero value. It is of no more use than any pieces of total garbage.

So with all that in mind, we are about to see another massive disinformation campaign by Russian trolls. There are reports that this campaign has already begun. Here is what we are hearing already, led by Russia’s foreign ministry spokeswoman Maria Zakharova:

The picture at the beginning of this article is of Vladimir Putin was visiting Russia’s National Grain Center, responding to a question from a BBC reporter about whether Russia was responsible for poisoning Skripal. He responded with a mocking answer:

We’re dealing with agriculture here you see, to create conditions for people’s lives. And you talk to me about some tragedies. First, get to the bottom of it there, and then we’ll discuss this.

Putin was able to respond with a smirk because he knows that Russia will get away with the attack on Skripal. Canadian Broadcasting

Skripal was attacked with Novichok, a military-grade nerve agent developed by Russia

The military-grade nerve agent Novichok has been identified as what was used to poison Skripal, his daughter, and the policeman who found them. As far as is known, nobody knows how to make Novichok except the Russians.

Novichok means “newcomer” in Russian. Novichok agents were developed in the 1980s as a new weapon in the waning days of the Cold War. Novichok chemicals were designed to evade equipment carried by NATO troops. NPR