Suicide bomber in Kabul, Afghanistan, kills over 50 registering to vote 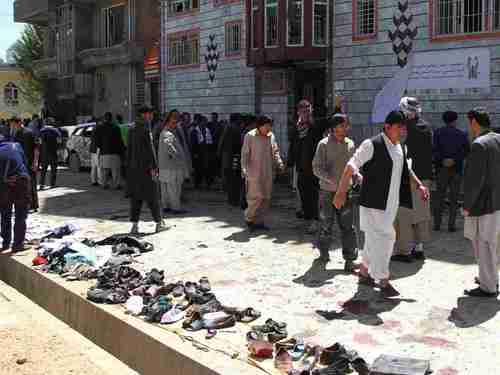 Clothes and shoes are seen at the site of a suicide bomb attack in Kabul, Afghanistan, on Sunday. The items were placed in a row for the victims’ families to claim afterwards. (Getty)

A massive suicide bombing on Sunday struck a voter registration office in Kabul, the capital city of Afghanistan. More than 50 people were killed, including women and children, while over 100 others were injured.

The voter registration office is one of dozens the Independent Election Commission (IEC) has set up across the country to register voters for the national elections in October. As of Saturday, the voter registration process had been in process for seven days, but turnout had been disappointing low. Only 189,061 people, including just over 42,000 women, had registered to vote as of Saturday.

People were afraid to vote for fear of violence by jihadists, even though the IEC and the army had been reassuring the public that all the voter registration offices would be secure.

There had been several small jihadist attacks on the centers across the country in the last week, but the attack on Sunday of the registration center in Kabul was the most devastating attack in Kabul since January, when about 100 people were killed by a bomb concealed in an ambulance.

The so-called Islamic State (IS or ISIS or ISIL or Daesh) claimed credit for the Kabul bombing through its Amaq public relations agency.

Sunday’s attack targeted an area of western Kabul inhabited by many members of the mainly Shia ethnic Hazara community, who were part of the Northern Alliance that fought against the Pashtuns (Taliban) in the civil war of 1991-96.

Afghanistan’s last generational crisis war was the extremely bloody Afghan crisis civil war, 1991-96, which mostly pitted the ethnic Pashtuns, who are Sunni Muslims and later formed the Taliban, versus the Northern Alliance of Tajiks, Hazaras, and Uzbeks in northern Afghanistan. Now, twenty years later, Afghanistan is in a generational Awakening era, and a new young generation of Pashtuns is coming of age, raised on stories their parents told them about the atrocities committed by the Northern Alliance, and they’re looking for revenge.

So Sunday’s attack has multiple purposes. First, it targets Shia Muslims who Sunni jihadists say are infidels. Second, it targets the hated Hazaras, in revenge for actions taken in the 1990s civil war. And third, it cripples the registration effort, and makes it far less likely that there will be an election that brings Hazaras to power.

As I’ve written many times in the past, there is no possibility whatsoever that these attacks will stop, through negotiations or American or Afghan military action. To the contrary, they will get worse, as new young Pashtuns come of age and decide to get revenge against the Hazaras. Tolo News (Kabul) and CBS News and Long War Journal and Tolo News and Reuters

Since 2014, some Taliban groups in Afghanistan have been changing their allegiance from al-Qaeda to ISIS leader Abu Bakr al-Baghdadi, mainly for public relations purposes.

However, with the loss in Syria and Iraq of most the territory formerly controlled by ISIS, many of the tens of thousands of jihadists who came from over 80 countries to join ISIS and fight Syria’s president Bashar al-Assad are now returning to the home countries. In the case of Afghanistan, it means that some of the Pashtuns that left home to join ISIS in Syria are now battle-hardened, and are returning to Afghanistan and joining existing jihadist Taliban groups that have sworn allegiance to ISIS.

Up until the last few months, the ISIS-K groups in Afghanistan had no real connection to the ISIS in Syria. But with the influx of fighters from Syria returning home, ISIS-K is becoming a more serious threat to Afghanistan, and there will be further attacks. Long War Journal (21-Mar) and Diplomat and Business Insider (11-Feb)