Various news agencies report a fire broke out Thursday on Russia’s sole aircraft carrier as it stood alongside for repairs in an Arctic shipyard, with at least one worker reported missing.

The Admiral Kuznetsov has been undergoing repairs for more than two years in Murmansk.

More than 400 people were aboard when the fire erupted, state news agency TASS quoted a Zvezdochka spokesman as saying. The repairs were expected to be completed by the end of 2020, with the warship rejoining the navy in 2021.

News agency Interfax reported that the fire had spread over an area of about 600 square metres (6,500 square feet).

The Admiral Kuznetsov — launched in 1985 and the flagship of the Russian navy — has been undergoing its first major repairs since 1997.

While the ship with its turbines belching black smoke looks outdated compared with the U.S. nuclear-powered carriers, it allows the Kremlin to project power far away from Russia’s shores.

Two years ago, the warship was deployed to the eastern Mediterranean as part of Russia’s campaign in Syria, launching the first carrier-mounted attacks in Russia’s navy history. 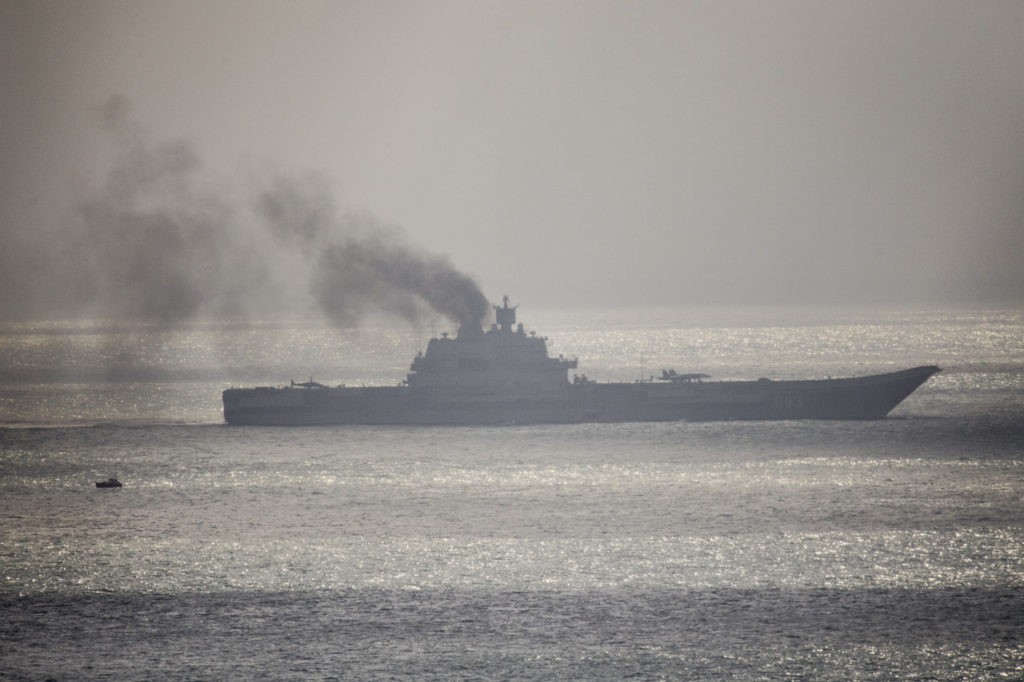 The Russian aircraft carrier Admiral Kuznetsov passes through the English channel on October 21, 2016 near Dover, England. The Russian Navy’s flotilla of warships is presumed to be heading to the Mediterranean to support the Russian military’s current deployment in Syria. (Leon Neal/Getty Images)

On that occasion,  Popular Mechanics dubbed it “Russia’s sad, smokey carrier,” which “doesn’t seem to be doing much of anything.”

Popular Mechanics based its assessment on a Russian TV news report shot on the deck of the carrier and noticed that “many of the airplanes are completely unarmed, their wings devoid of missiles and bombs.”

Also, the carrier’s anti-submarine helicopters — of little use for its current mission against Syrian rebels and Islamic State militants — were tied down in the middle of the flight deck, which would make launching fixed-wing aircraft impossible.

As Breitbart News reported,  the ship suffered previous damage in October 2018 when a crane crashed onto its deck after a floating dock sank early morning in Murmansk.