Iranians who fled the Islamic Republic after facing persecution and prison sentences for their Christian faith said in remarks to Breitbart News this week that the majority of people in Iran support President Donald Trump’s decision to eliminate Iranian terror chief Qasem Soleimani.

Soleimani, a major general in the Islamic Revolutionary Guard Corps (IRGC), was the head of Iran’s Quds Force and responsible for its foreign terrorism strategy. U.S. officials have confirmed that he pioneered the use of roadside bombs in Iraq and Syria to kill and dismember American soldiers. Trump ordered an airstrike on Soleimani in January after a pro-Iran mob attempted to storm the U.S. embassy in Baghdad.

Breitbart News asked two of the women if Trump’s policies toward Iran were helping the people there, and specifically persecuted Christians.

“After President Trump came into office you see a lot of standing and supporting the Iranian people,” Rostampour said, adding that remarks from Trump or Secretary State Mike Pompeo supporting Iranians and their fight for freedom “is very encouraging for the Iranian people.”

“I support one hundred percent [Trump’s] policies, especially the killing of General Soleimani,” Rostampour said. “The majority of Iranians believe that he was a terrorist. Not only in the countries of the region but also he was responsible for killing thousands of people in Iran.”

She said many of those inside Iran who were killed were protesters who had no weapons but stood up against the regime nonetheless.

“That’s why we believe the international community, the United States, European countries need to stand with the Iranian people because this is their basic human rights,” Rostrampour said. “They want freedom. They are tired of this regime.”

“And, honestly, it’s so frustrating to see that the media in the West just spreading the Iranian regime’s propaganda instead of standing for what is right,” she said.

Rostampour said in recent months some 1,500 people have been killed and thousands more thrown into prison for blasphemy and many of those receive death sentences.

“But when we look at the Western media you don’t hear about the suffering of the Iranian people,” she said. “That’s why we appreciate what the Trump administration is doing … standing for the Iranian people and supporting human rights.”

Dabrina Bet Tamraz said she believes Trump’s policies toward Iran have “raised awareness,” especially about the lack of religious freedom in Iran. 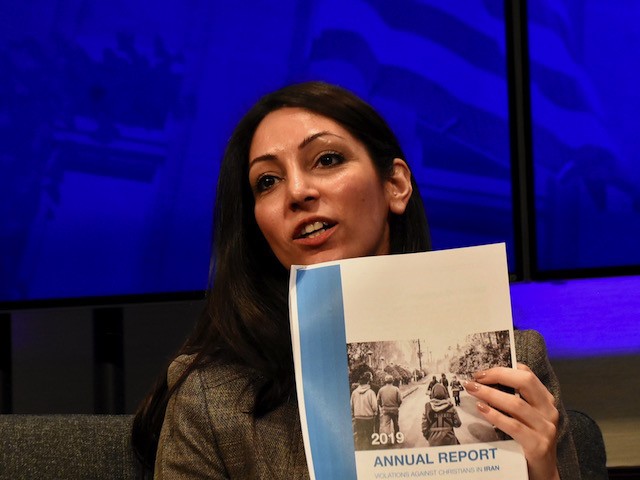 Dabrina Bet Tamraz is the daughter of an Iranian pastor who is serving time in prison in Iran because his Christian faith is a threat to national security, the Islamic regime claims. She spoke at the Family Research Council in Washington, DC, on Wednesday. (Penny Starr/Breitbart News)

“We have not experienced such publicity and focus on religious freedom, especially within the country of Iran,” Bet Tamraz told Breitbart News.

Rostampour and Marziyeh Amirizadeh are Christian converts from a Muslim background. Evangelism is illegal in Iran, but the two women were devoted to spreading the gospel and handed out 20,000 copies of the New Testament. 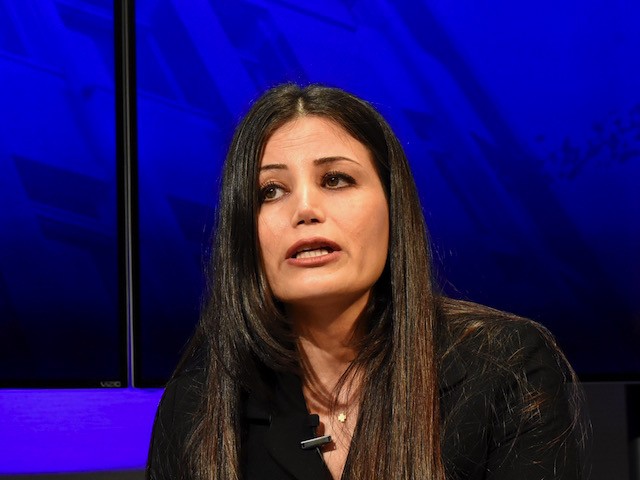 Marziyeh Amirizadeh who fled Iran spoke at the Family Research Council in Washington, DC, on Wednesday about the persecution of Christians in Iran. (Penny Starr/Breitbart News)

In 2009, they were arrested and spent almost nine months in the notorious Evin Prison in Tehran. They co-wrote a book about their experience, Captive in Iran.

The women said that they believed they survived their incarceration because so many people around the world prayed for them and made their plight known. And many people sent letters expressing their support.

Although hundreds of letters poured into the prison, they never saw any of them. But in the end, they realized even that was part of God’s plan when prison guards — who did see the letters — asked questions like, “What does it mean when people say Jesus is their Shepherd?”

“Then we realized the letters weren’t for us, but for them,” Maryam said.

The women took part on Wednesday in a panel discussion at FRC in Washington, DC, about the Iran regime’s ongoing persecution of Christians.

The women also reported that Iran has the fastest growing Christian underground church in the world.

As Breitbart News reported, Soleimani was not just an Iranian military leader:

Soleimani, a major general and the head of the Islamic Revolutionary Guard Corps (IRGC) Quds Force, was responsible for Iran’s terrorist operations abroad, particularly against the United States. He was believed to have coordinated a significant number of human rights atrocities in Syria in defense of dictator Bashar al-Assad and was in charge of organizing terrorist activity in Lebanon, Iraq, Yemen, and Latin America, among other areas.

He prioritized the use of roadside bombs to injure and kill American soldiers in battlefields like Iraq, where Iran largely controls the government in Baghdad and its proxy forces on the ground.