Hong Kong’s Beijing-controlled chief executive Carrie Lam said on Monday that the hugely successful primary held over the weekend for pro-democracy legislative candidates might have violated the “national security” law China imposed on Hong Kong at the beginning of July.

Lam on Monday echoed the rumblings of oppression from lower city officials that since the pro-democracy candidates have promised to use their legislative strength to block the annual city budget from passing, their entire political platform could be classified as seditious under the Chinese security law.

“If this so-called primary election’s purpose is to achieve the ultimate goal of … objecting to, resisting every policy initiative of the Hong Kong SAR government, then it may fall into the category of subverting the state power, which is now one of the four types offenses under the new national security law,” said Lam, as quoted by the Hong Kong Free Press.

SAR stands for Special Administrative Region, a claim to autonomy that is increasingly difficult to take seriously after Beijing overrode the Hong Kong legislature to impose the security law, which is indeed crushing political dissent, precisely as its critics feared.

Lam also said her office received “a large number of complaints” that the pro-democracy primary, which collected about 600,000 votes, had “caused confusion, broken Covid-19 gathering rules and was a breach of privacy.”

She further derided the primary as purely symbolic, since it was a voluntary exercise by pro-democracy parties, not an official primary election recognized by the Hong Kong electoral system.

Lam’s comments closely mirrored those of Secretary for Constitutional and Mainland Affairs Erick Tsang, who said the weekend primary election would receive no official sanction, and speculated that everyone who participated might be charged with sedition under the security law.

The Chinese Communist government in Beijing branded the primaries “illegal” on Monday, denouncing them as a subversive “provocation” secretly orchestrated by hostile foreign powers plotting to overthrow the government of Hong Kong. 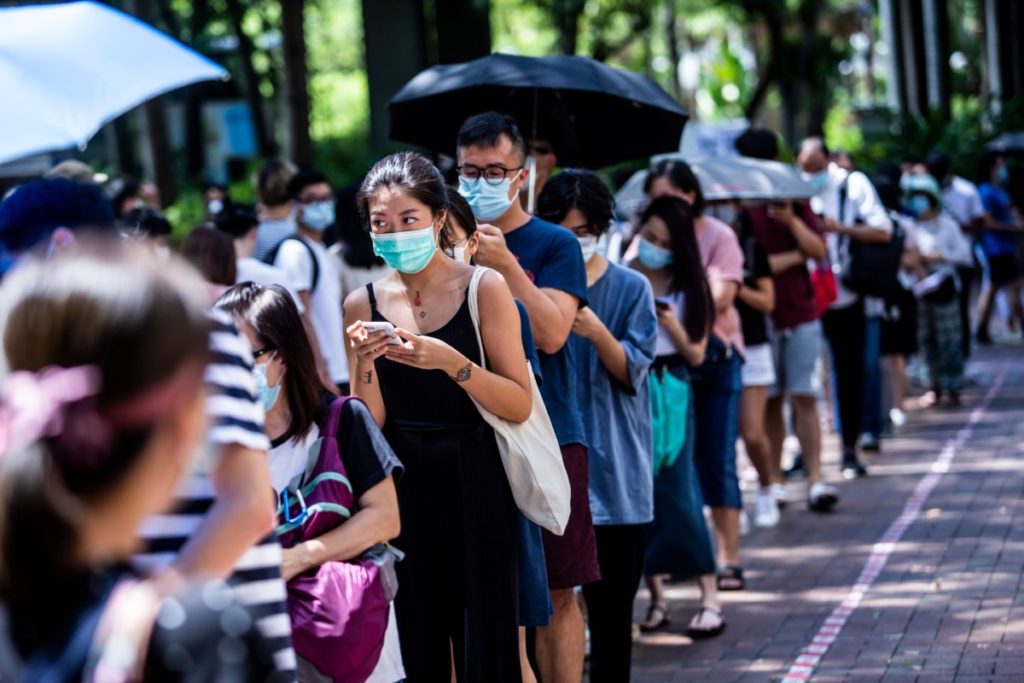 A woman (centre L) uses her phone while waiting to vote during primary elections in Hong Kong on July 12, 2020. – Pro-democracy parties in Hong Kong held primary polls on July 11 and 12 to choose candidates for upcoming legislative elections despite warnings from government officials that it may be in breach of a new security law imposed by China. (ISAAC LAWRENCE/AFP via Getty Images)

“With the support of external forces, opposition groups and leaders have deliberately devised plans to hold this so-called ‘primary election,’ which is a serious provocation to the current electoral system and caused serious damage to the fairness and justice of the Legislative Council elections,” China’s Hong Kong Liaison Office said on Monday.

Primary organizers responded that electing their slate of pro-democracy legislators would not pose any real danger of “seriously interfering in, disrupting, or undermining the performance of duties and functions” of the administration because Lam has the power to dissolve the legislature and call for snap elections.

“How can a power that is recognized by the Basic Law be breaching the national security law?” organizer and legal scholar Benny Tai asked, referring to the legislature’s power to veto budgets under the Basic Law that has defined Hong Kong’s legal system since 1997.

Tai was personally threatened by the Hong Kong Liaison Office in Beijing, whose statement asked who “instructed him to openly manipulate the election in so high-profile a manner?” and noted he and other organizers could face up to ten years in prison for “colluding with a foreign power” under the security law.

This danger was well-understood by Hong Kongers in advance, which makes the immense turnout for the primary all the more impressive – everyone who cast a ballot knew they were risking legal penalties under the oppressive Chinese security law. Several local officials issued ominous warnings to that effect last week, and the Hong Kong police kept the primary under very obvious scrutiny, but voters turned out anyway, in numbers far greater than the organizers expected.