Congress wants the White House staff director involved in the now-infamous “gatecrasher” dinner to explain what happened. She won’t, because President Obama is invoking executive privilege. While there’s a decent claim for executive privilege here, Barack Obama’s hypocrisy is nothing short of stunning. 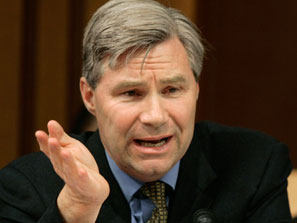 Most people have heard about the Virginia couple who apparently crashed the White House official dinner for the prime minister of India on Nov. 24. (It’s called an “official dinner” instead of a “state dinner” because the prime minister is not India’s head of state.) Congress has launched a probe and is demanding answers as to how uninvited people could end up shaking hands with the president of the United States and posing for photos with the VP and chief of staff.

One person Congress wants to speak with is Desiree Rogers, the White House Social Secretary. For dinners in previous administrations, the White House Social Office posted staffers at the entrance with a list of the invited guests to make sure fiascos like this can’t happen. Rogers, who holds her job because she’s an old buddy of First Lady Michelle Obama, evidently didn’t care enough to take this simple precaution.

But Congress won’t get the chance to ask Rogers, because President Obama is invoking executive privilege. That’s the legal doctrine for the president and certain executive-branch officials around him to refuse to testify in court or before Congress.

The president has a legitimate claim to executive privilege. Under the Constitution’s separation of powers, the president is a coequal branch of government. He doesn’t answer to Congress, nor does his White House staff.

So the problem is not that Obama is claiming the privilege; it’s the gross hypocrisy in doing so. On Mar. 31, 2008, then candidate-Obama blasted President Bush for not sharing with Congress or collaborating enough with Congress. (Ironically, that speech focused on avoiding congressional approval for official actions, a practice that Obama has put on steroids with his armies of unaccountable “czars,” but that’s another column.) He criticized invoking executive privilege in other speeches as well. He pledged an unprecedented level of information-sharing with Congress.

It seems those were just words. Chalk it up as another promise broken.

And even then, Obama’s claim of executive privilege–while legitimate–is weak. That privilege exists for two reasons. First, to protect foreign policy concerns like diplomatic secrets and military matters. Second, to ensure that the president can get candid advice on making difficult decisions and fulfilling his duties.

None of those have anything to do with Desiree Rogers. She’s the social secretary, not the defense secretary.

It’s true that White House staffers are more covered by executive privilege than officials in departments and agencies, because the White House is the president’s personal staff, whereas departments are created by Congress and answerable to Congress.

But executive privilege radiates from the president himself, not the White House. The less involved the president is, the less executive privilege is in play. When the president talks with his national security advisor about troop movements in Afghanistan, that’s protected. But when Michelle Obama’s buddy is talking with her staff about how to run the social aspects of a dinner, it makes a mockery out of an important presidential privilege to say that this political flunky shouldn’t have to answer for her gross incompetence.

Congress should subpoena her, and then fight this out in Court when the president refuses to let her testify. But despite Nancy Pelosi’s promise to provide unprecedented transparency, you can count on her not allowing Congress to do anything that embarrasses her party’s leader.

Of course, if Republicans retake the House next year, then they could still subpoena Rogers. If President Obama again invokes executive privilege, the GOP would have a decent chance of beating him in court.

Desiree Rogers obviously isn’t up to the job she holds, and she should have to confess her dismal failure to Congress and the American people, and then be fired. But that’s not how things work in Obamaland, because it’s the Chicago way to take care of your friends even when they can’t cut it, and then blame career public servants–here, the U.S. Secret Service–and go after those just trying to get the facts.

This incident doesn’t figure prominently in the big scheme of things. But it’s yet another example of how the change Obama delivers isn’t the change he promised.

Ken Klukowski is a fellow and senior legal analyst with the American Civil Rights Union.