Prominent current and former members of SEIU local 73 are being investigated for their potential ties to the Hamas and FARC terrorist groups.

Late last year, their homes were raided by the FBI, and they were subpoenaed to appear in front of a grand jury for questioning.

Joe Iosbaker, Chief Steward of SEIU 73, and Tom Burke (former board member of SEIU 73) are among 9 people who are subjects in the investigation. None of them have been charged with any crimes, yet.

Two days ago, they refused again to appear in front of the grand jury.

The interesting thing about these SEIU folks is that they also belong to a violently radical group called the Freedom Road Socialist Organization. From their website:

The Freedom Road Socialist Organization (FRSO) is a revolutionary socialist and Marxist-Leninist organization in the United States.

1) We stand for the right to self-determination up to and including secession for the African American nation in the Black Belt South.

While rejecting Zionist claims on Palestine and white supremacist claims to a white southern nation or northwestern nation, we do acknowledge the fact that the most advanced sections of the Black liberation movement, from the 1800s on, have demanded a Black Republic in the South.

It gets worse from there.

This is the same group who, along with the other subjects of the FBI investigation, takes credit for staging the 2008 RNC protest-riots.

Shockingly, SEIU leadership is supporting their accused members, and the chosen strategy of not cooperating with law enforcement.

Beginning at 6:15 in the video below, SEIU’s Matt Brandon gives the union’s full-throated support for targets of the investigation.

Let that sink in for a minute. SEIU members are being investigated for potential ties to terrorists, and SEIU leadership is supporting non-cooperation with law enforcement. Can we question their patriotism yet??

Imagine Haliburton being investigated by DOJ for potential ties to terrorists, and their management comes out in support of ignoring grand jury subpoenas. Do you think mainstream media outlets might cover it?

The bottom line is that in addition to demanding the right to riot on the streets of America, the Progressive movement in this country (including SEIU) wants the right to organize “non-violent” actions with Hamas and FARC.

Pay close attention to the 2 minute mark in the video below. The Lawyers Guild protester lets the cat out of the bag when he talks about Global Exchange being threatened by all of this. Global Exchange is one of the groups that helped organized the violent Hamas flotilla.

So here you have SEIU members participating in violent revolutionary causes, and SEIU leadership defending them.

This raises a lot of questions about the extent of coordination between the American Progressive movement and global terrorist organizations. We can think of at least two people who are strongly associated with this exact SEIU local 73, people who might be able to shed some light on the actions of its members: 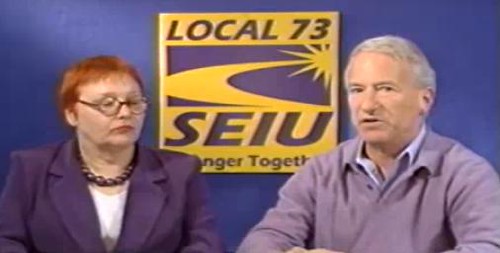 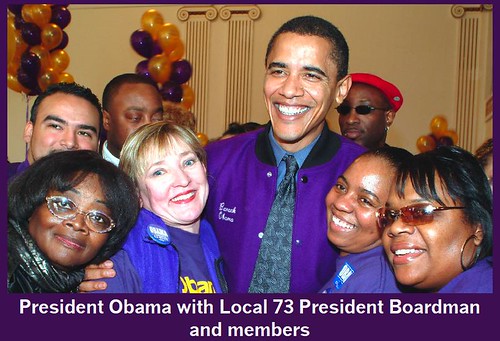 SEIU Local 73 was all across the nation in 2008 assisting Barack Obama in his historic run for the White House. Members and SEIU Local 73 staff worked the primaries not only in Illinois, but in Ohio and other key states. The Purple Army was out in force to turn our nation blue!

To say that they are close is an understatement.

What does the President know, and how long has he known it?

Another Target Of FBI Terror Raids Connected To SEIU