In the Town That Thinks It’s More Sophisticated Than The Rest Of America, Washington D.C., the natives are reverting to something a trifle more primitive than the rest of America: they’re throwing rocks. At buses. With people on the buses.

Why, the next thing you know Barack Obama will be trying to enact rock control legislation.

The way that Washington police are dealing with the violence against Metrobuses in Southeast Washington? They have put out fliers warning people not to throw rocks because it’s a crime. 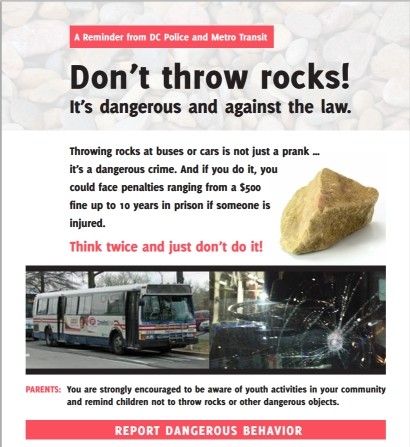 The transit agency thought of stopping the nighttime runs on the routes being attacked, but gave up the idea.

Has anyone thought of the fact the no one will see the fliers at night?

Not to worry: Barack Obama knows whom to blame. He’s in the process of looking for Fred Flintstone’s number.