Senator Paul received 31% of the vote this year, while Senator Cruz received 11% and Dr. Carson 9%. Following closely behind were New Jersey Governor Chris Christie with 8% of the vote, Wisconsin Governor Scott Walker and former Pennsylvania Senator Rick Santorum tied with 7%, and Florida Senator Marco Rubio with 6%.

Texas Governor Rick Perry and 2012 Vice Presidential nominee Paul Ryan also tied with 3% of the vote, and a four-way tie between Louisiana Governor Bobby Jindal, former Secretary of State Condoleezza Rice, former Arkansas Governor Mike Huckabee, and former Alaska Governor Sarah Palin for 2% rounded out the bottom. 9% of respondents to the poll voted for other candidates that did not consolidate more than 2% of the vote. See the full results of the straw poll below and the answers to other questions from the poll on the CPAC website [PDF]. 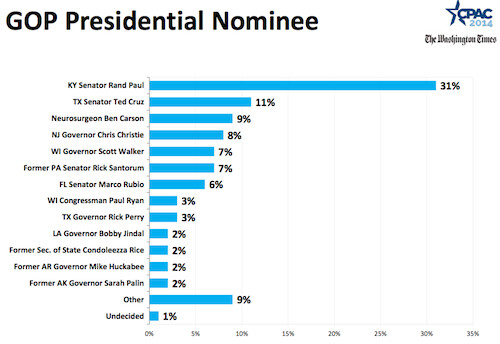 Senator Paul has consolidated his support among CPAC attendees since last year’s straw poll. In 2013, Paul barely edged to the top spot with 25% of the vote, with Senator Rubio receiving 23% of the vote. This year, Senator Paul put twenty points between himself and his closest competitor, a little more than a year after conducting the filibuster against government surveillance that solidified his place as one of the most dynamic personalities in the United States Senate.

Upon the release of the straw poll results, Senator Paul said he was “grateful to all the attendees who stood with me” in a statement. “The fight for liberty continues,” he added, “and we must continue to stand up and say: ‘We’re free and no one, no matter how well-intentioned, will take our freedoms from us. Together we will stand up for the Constitution. Together we will fight for what is right.’ Thank you and onwards to victory.”

Senator Cruz and Dr. Carson, who took second and third place, respectively, tied with 4% of the vote last year. Since then, Senator Cruz rose to the top tier of the 2016 Republican race for president with a filibuster against Obamacare that galvanized the conservative grassroots. Dr. Carson has also begun amassing significant support among the right, including a descendent of marching band composer John Philip Sousa.

Speeches by Senator Paul, Senator Cruz, and Dr. Carson below: