President Obama’s recent trip to Kenya and Ethiopia provided him with a total flight time of 29 hours at the cost of $5,983,773 tax dollars, according to the National Taxpayers Union Foundation (NTUF).

Obama’s trip to Africa required additional security measures, which upped the cost to taxpayers. NTUF launched a presidential travel study called “Still Up in the Air” where it found that, on the day Obama returns from his trip to Africa, he has spent 161 days abroad during his presidency, and 41 of those trips were international.

“NTUF found the President has traveled internationally as much as any U.S. President through July of the seventh year in office – equaling former President Clinton with 41 trips. Though, Obama has tended toward shorter stays, falling shy of Clinton’s 178 days spent overseas,” stated NTUF’s press release. 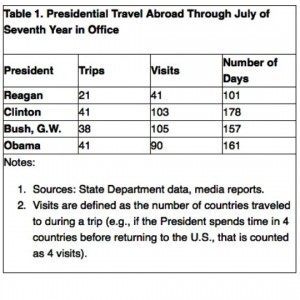 NTUF estimated that the hourly cost of flying Air Force One during 2015 has been $206,337 per hour of flight. However, the press release added, “This figure, obtained by Judicial Watch, represents a slight decline from 2013.”

An interesting fact most people do not know, but emphasized by NTUF, is that vacation trips by presidents are considered official travel and are funded by tax dollars. 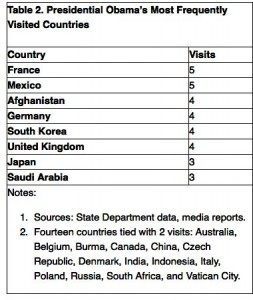 Study author and Policy Analyst Michael Tasselmyer stated, “While flight costs can be estimated, the rest of the expenses associated with travel, including security, lodging, food, and more, not just for the President and Air Force One, but additional staff and airplanes, remains opaque.”