This week, Jon Stewart broadcast his last episode of The Daily Show. It was perhaps appropriate that his swan song coincided with the first Republican presidential debate of the 2016 election. The Obama era, which Stewart did as much as anyone to create and sustain, is ending.

A more significant coincidence, perhaps, is the release this week of Mark Levin’s latest book, Plunder and Deceit. Stewart appealed to young Americans, and became the primary source of news for many. Levin is trying to wake them up to the reality Stewart’s jokes often obscured.

Levin is a brilliant writer, and I enjoy his prose. I wondered, however, if I would have read his book when I was in my late teens or early twenties.

When I graduated from high school, a relative gave me a signed copy of a new book called The Diversity Myth, about political correctness at college. I flipped through it, too briefly: it seemed like two entitled white boys griping about affirmative action. I had friends who used affirmative action as an excuse when they were rejected by Ivy League schools. That bored me.

(I put the book on a shelf for 20 years, before remembering it. It is brilliant. The authors, David Sacks and Peter Thiel, went on to become pioneers of the Internet economy.)

What could have reached me at that point in my life?

The people I met at college challenged my views–from the left. They told me that even my center-left ideas were based on assumptions inherited from my parents and my comfortable life in a middle-class community. What was radical, was real.

So I sought professors like Cornel West, to understand what the new and better world was to be, and who I would be in it.

But my enthusiasm for the far-left began to wear off after a while. Nothing I had learned seemed to have any relation to the real world. And the left had a stifling conformity all its own.

I dared to attend a few conservative events, and found students and professors more tolerant of difficult questions.

But I could not be one of them. The point of being young was to change the world. They wanted to keep things the same. I didn’t know what I believed–I wanted to try knew things. They knew what they thought–and their certainty puzzled and intimidated me.

This week, I was cleaning out some old files when I came across a sketchbook in which I had doodled a bit after graduating from college. I had gone to Israel to study in a Jewish seminary, and started writing for the first time. My first thoughts were just the radiations of everything I had absorbed until then. One sketch was my attempt to depict conservative America. 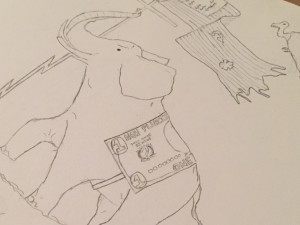 I drew a Republican elephant, angry and triumphant atop a mushroom cloud, waving a tattered flag mounted on a cross that sharpened into a lightning bolt. The elephant had a broken tusk and a giant dollar bill strapped to its back like a saddle. A vulture flew overhead in place of the bald eagle.

I had no reason to be that cynical. But that is how I saw America.

Those themes were dominant in academic high culture, and increasingly in popular culture, long before George W. Bush, the recount, the Iraq War or the Daily Show.

That was the face of evil, to me: the embrace of power, of faith, and of money. These were primitive instincts that had to be overcome by reason, peace, open-mindedness, and social justice.

So what opened my eyes? Three things, which happened when I studied and worked in South Africa.

First, I volunteered in a very poor and dangerous part of Cape Town, and saw that government was a nuisance at best and a foe at worst to people who needed help most. Second, during the second intifada and after 9/11, I encountered virulent anti-Israel and anti-American hatred on the left, and “well-meaning” people who were prepared to ignore or distort the truth. Third, I went through a painful breakup with my then-girlfriend back in the U.S. It was rough (we are friends again today), but being truly alone abroad gave me a chance to explore new ideas and to follow new paths.

You can experience similar things and still be a Democrat, of course. (I thought I was, until I returned to the U.S. and realized how much my views had changed.) Few people switch sides; you almost have to be a true believer, as I was, to convert rather than lapse into apathy or doublethink.

But maybe, in the contest of ideas, a few converts are enough.

I hope Levin’s book finds young readers more patient than I was.