We’re constantly told that sexism and stereotypes are what hold women back in maths, engineering and tech. But it’s a lie. The real reason there aren’t more female astrophysicists is that the number of really, really smart girls is minuscule.

Sorry, no offence, but it’s true. Of course there’s the odd mould-breaking chick brainiac who gets a lot of press attention. But they’re in the minority, and not because girls are put off by some mythical male-dominated patriarchy.

There’s little doubt that men occupy more of the higher end of the IQ scale. Every study comes out the same. IQ isn’t a perfect measure of everything, but it’s the best indicator available of whether someone will be able to compete at the very highest levels. Politically correct publications such as Quartz phrase the science like this:

Even in these enlightened times, men still do display a wider range of intellectual ability. Using several different measures of intelligence including IQ and SAT scores, more men are found in the high and low tails, according to Josh Aronson, a professor of applied psychology at NYU

In other words, men are brainier – and more stupid – than women. One commonly-cited IQ distribution graph, for instance, looks like this.

The same findings explain why men are better at chess. But – and this is where feminists are going to lose their shit – I was recently sent a data set, taken from the study site IQComparisonSite, which goes even further than previously reported studies. Here’s what the authors say:

Male and female mean IQs are about equal below the age of 15 but males have a higher mean IQ from age 15 on. The effect of sex differences in IQ is largest at the high extreme of intelligence.  Since many of the more prestigious roles in society are associated with high IQ, the lack of female representation in these roles may be partially due to fewer females being competitive at the highest levels.

In other words, men are not only smarter after puberty kicks in, but the gap widens the further up the IQ scale you go. The higher someone’s IQ, the more likely they are to be a man. Although there is relative parity between men and women around the average IQ of 100, at IQs of 130-150 the male to female ratio is already 2.5:1.

The results of this study come from a battery of 36 questions that required minimal prior knowledge to answer, given to test reasoning and pattern recognition under distraction. There was no time limit, and the study was standardized against a Mensa sample. The tests were confidential but because purchasing results or answers required a credit card or PayPal, users could be connected to a real-world identity by the site and had a strong incentive to use the correct credentials.

The results are even worse for the equality of outcome crowd because they don’t show the sublime geniuses and backward knuckledraggers trend in the bell curves above: these data show that there’s little difference between men and women at the lower end of the scale and that it’s only as people get smarter that the gap opens up. So according to this data it’s not the case that men are both stupider and more intelligent – just the latter.

It’s not fair to simply say “men are smarter than women.” It’s a bit more subtle than that. But it is clearly preposterous to assume that the only reason there isn’t gender parity in the sciences and maths is some kind of discrimination. Unless, of course, you consider Mother Nature a bigot.

By the way, the last IQ range in the study ends at 175, with an 11:1 ratio. We can’t calculate ratios beyond that, because no woman scored higher than 176: as even female readers will know, you can’t divide by zero. Attempting to predict the number of women in America between the age of 40 and 65 with IQs that high is therefore impossible. 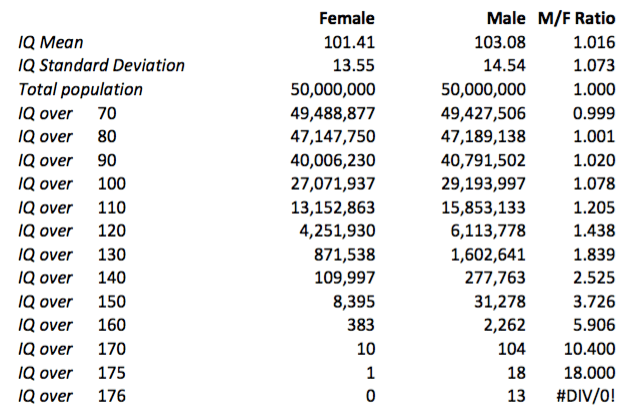 (In the interests of fairness, the numbers above are calculations and they assume that each gender’s IQ is distributed as a smooth bell curve. That assumption may not be perfect, so these numbers might not be exactly right, but they give an accurate enough result.)

So much in education has been changed recently to better suit women, including a renewed focus on coursework, because women don’t perform well in exams. That’s one reason why more women are going to university and more are graduating. But no amount of gerrymandering with educational styles is going to close the gap at the top of the IQ scale: all it does is unfairly disadvantage men further down.

We know gender equality efforts in STEM are foolish, because in a free society women choose the subjects they are most interested in. The high IQ outliers among women will continue to enter STEM, as they always have. Forcing those who are not elite to compete with those who are is not empowering. It’s just cruel. And lowering the bar to accommodate mediocre talent is just as bad. How far do feminists want us to fall behind Asia, exactly?

The point here is not to denigrate women, but rather to remind feminists who insist on quotas, affirmative action and various other batty methods designed to artificially level the playing field that they’re doing so not to redress any injustices perpetrated by a sexist system, but merely to meet arbitrary ideological objectives that run counter to biology which, yes, has a massive effect on how smart men and women are related to one another.

It doesn’t matter if women “test poorly” or if IQ doesn’t measure a totality of intelligence or if the test is somehow biased toward men. Because it’s IQ skills that are required to solve the hardest puzzles in mathematics and physics, not verbal communication or any of the other, equally important kinds of intelligence. The work that drives society and technology forward looks a lot like an IQ test, and men simply do better at them.

One last thing. Genius IQs also map neatly onto some kinds of artists, too. There’s a reason there are no truly great female artists and that women’s paintings don’t command the same prices as men’s. (And no, it’s not entrenched sexism in the art market.) Don’t expect a female Mozart or da Vinci any time soon – although art forms that focus on communication and empathy, such as novel-writing, do enjoy strong female representation. So there’s that, at least.