At current immigration levels, the U.S. will add approximately the population of Los Angeles very three years within the coming decade, according to Republican staff on with the Senate Subcommittee on Immigration and the National Interest.

According to the committee, the Census Bureau projects that annual net immigration is currently 1.24 million and rising. A committee-produced chart pins data very three years showing that from 2015-2017 3.75 million net immigrants will enter the U.S, another 3.85 million on net will be added from 2018-2020 and from 2021-2023 there will be an addition net 3.85 million million.

As the committee points out, the population of Los Angeles, California as of 2013 was 3.88 million.

“This is not, however, a total estimate of the full impact of immigration on population,” the committee argues in its background analysis of the chart. “Adding in the future children of new immigrant arrivals (as well as subtracting population deaths) the Pew Research Center estimates future immigration will add 103 million new people to the U.S. population over the next fifty years (or more than the equivalent of 25 cities of Los Angeles).”

It adds, “Within just eight years, the foreign-born share of the U.S. population will eclipse all prior historical records and continue setting new all-time records every year to follow.” 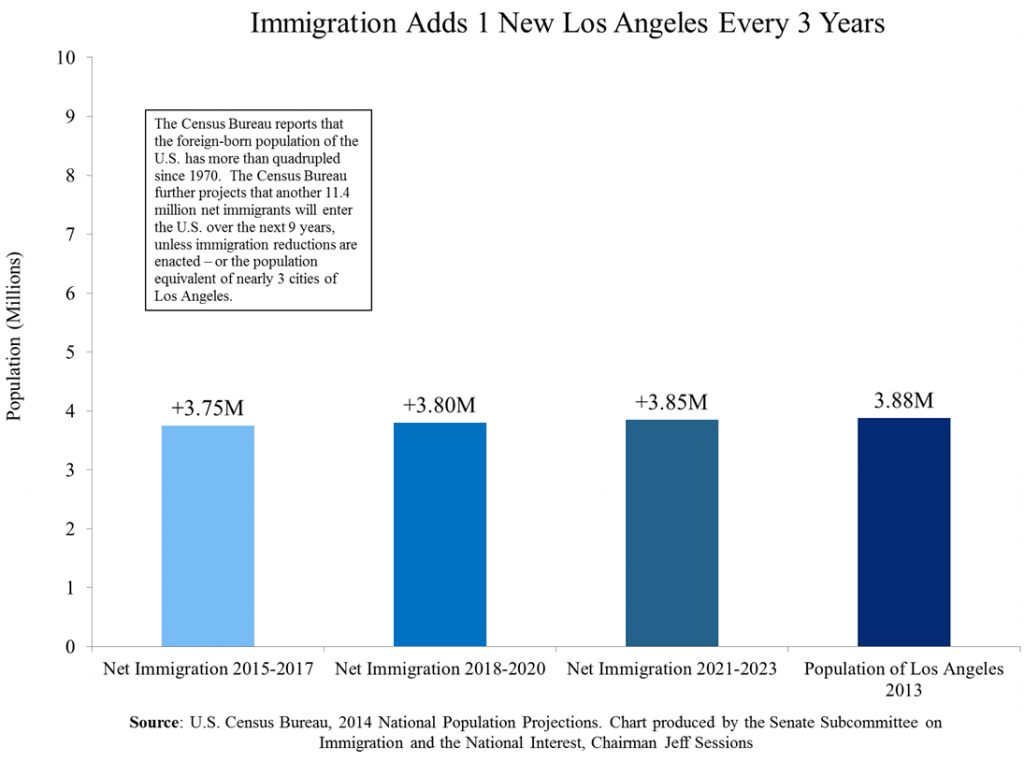 The committee notes that in the years following the Immigration and Nationality Act of 1965 through today the foreign-born population in the U.S. has more than quadrupled to the point at which 1 in 7 U.S. residents are foreign-born. Compared to the 1 in 20 foreign-born residents in 1970.

In historical context, the committee explains in its analysis, the large wave of the 1960s and beyond followed a period of reduced immigration.

The current high immigration rates to the U.S. will continue unless Congress passes legislation reducing the number of green cards issued each year. Currently, the U.S. issues more than 1 million green cards—which provides the benefiting immigrant permanent residency and a path to citizenship—each year.

Sen. Jeff Sessions (R-AL), the subcommittee chairman, has advocated putting additional limits on immigration to the U.S. Sessions argued in a recent op-ed, co-authored with Rep. David Brat (R-VA), that Republican presidential candidates should commit to lower immigration levels or drop out of the race.

“Without such changes, the Census Bureau projects that, on our current immigration policy baseline, every single year the total number of immigrants in the United States will increase, the annual rate of immigrant admissions will increase, and the foreign-born share of the population will increase,” the committee background continued.

“Pew polling data shows that 83% of the public opposes this baseline and believes the level of immigration should either be frozen or reduced, including 92% of Republicans.  By a 3-1 margin across all voting blocs, Americans want immigration reduced, not increased,” it added. “By a nearly 10-1 margin, Americans of all backgrounds are united in the belief that companies with positions to fill should raise wages instead of bringing in new foreign labor from abroad.”